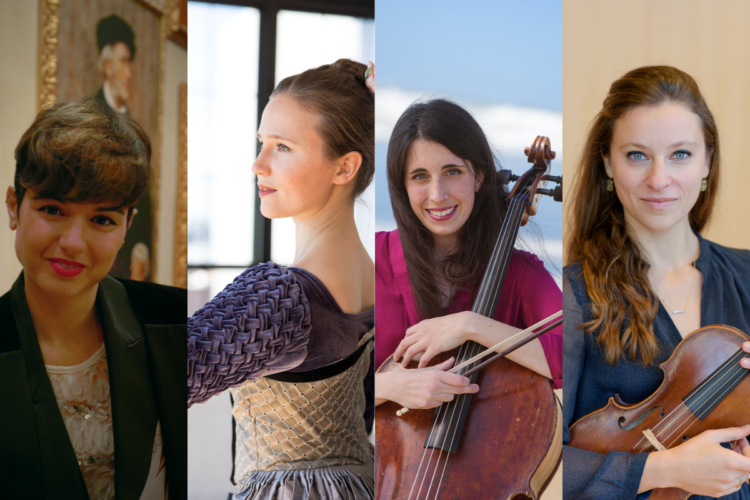 Patricia Garcia Gil (fortepiano), Greensboro, NC
“The idea is to portray the several nuances of ‘Enlightening figures.’ On one hand is the historical time marked by the desire for equality and progressive universal access to culture that spread in Europe during the late 18th century, known as the Enlightenment. On another is the metaphor of shedding light on these three inspiring women’s lives [all born in the middle decades of the 18th century] and their extraordinary music. Finally, the allegory of the chiaroscuro (light and dark), accessible in the music for the instrument that could make piano and forte, is present by physically creating lighting effects.

Compositions from Marianne von Martinez (Sonata in A), Marianna Auenbrugger (Sonata in E-flat Major), and Josepha Auernhammer (Variations on a theme of Mozart’s Magic Flute) will be framed by pre-recorded citations collected from Schönfeld’s Yearbook, Michael Kelly’s memoirs, the correspondence between Haydn and the editing house Artaria, Mozart and his father, Auernhammer’s secret plan of living off her talents, Martinez’s gratitude for being accepted in Bologna, and the touching dedication of Salieri to Auenbrugger.”

This presentation of J.S. Bach’s Fifth Cello Suite “incorporates choreography inspired by the life of Bach’s second wife and closest collaborator, Anna Magdalena Bach. Each movement in our suite portrays an aspect in the complicated relationship between the artist and their art, informed by the court dance they are named after. We imagine the artist feeling torn between the love for your husband and family and the love for your independence and art making.

Through our exploration of Bach’s suite of dances, we use each dance form to dig deeper into his extraordinary composition and pay homage to the extraordinary woman he chose to share his life with. If Anna Magdalena Bach had been able to foresee the legacy of her husband’s work, how would she have felt about her situation?”

The Italian humanist Giovanni Battista Doni (1595-1647) wrote about the versatility of the violin: “In the hand of a skillful player, the violin represents the sweetness of the lute, the suavity of the viol, the majesty of the harp, the vehemence of the trumpet, the vivacity of the fife, the sadness of the flute, the pathetic quality of the cornett.”