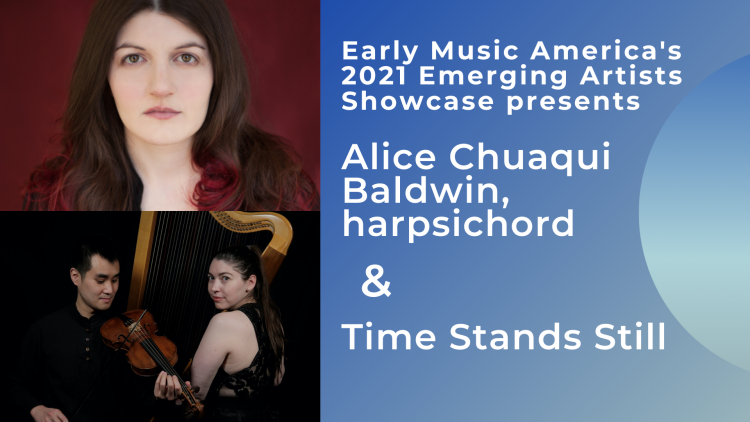 Contemplating Melancholy
– Giovanni Maria Trabaci, Toccata Seconda, & Ligature per l’Arpa from Il Secondo
Libro de Ricercate, & Altri Varij Capricci (1615)
– Tarquinio Merula, “Canzonetta spirituale sopra alla nanna” from Curtio
Precipitato et altri Capricij a voce sola (1638)
– Franz Ignaz Heinrich von Biber, Sonata No. 6, “Agony in the Garden” from
Bayerische Staatsbibliothek München: Mus. Ms. 4123 (“Mystery Sonatas”)
– John Dowland, “Flow my tears” from The Second Book of Songes (London:
1600)
—————————————–
About the Artists
Praised by The Register-Guard (Eugene, Oregon) for her “masterful solo performances” and “brilliant” playing, harpsichordist Alice M. Chuaqui Baldwin has performed as a soloist and continuo artist throughout North America and abroad. She holds a doctorate in harpsichord from Indiana University and studied with harpsichordists Elisabeth Wright and Jacques Ogg. From 2014–2016 she served as a continuo artist at the Oregon Bach Festival, performing with His Majestys Sagbutts & Cornetts, Masaaki Suzuki, Rachel Podger, Matthew Halls, Monica Huggett, Craig Hella Johnson, and Helmuth Rilling during her tenure there. In 2018 she worked at the Tafelmusik Baroque Summer Institute as part of their continuo team, and in 2019 she, along with the other members of the ensemble Innominatum, were awarded a Pegasus Rising grant from Pegasus Early Music to produce their concert “Pairs of Pairs: Selections from the French Baroque.” Alice was the featured young artist in the January 2019 issue of Early Music America magazine and was interviewed as part of their “Early to Rise” series. She has participated in the Juilliard at the Piccola Accademia program, the American Bach Soloists Academy, and the Tafelmusik Winter Institute, as well as performing at the 2014 Berkeley Early Music Festival with the ensemble Arethusa Musica. Also an active performer of new music, Alice has premiered several works, most recently a piece for solo harpsichord— Triptych of Life—by her husband, composer Nicolas Chuaqui. She currently resides in Rochester, NY, with her husband and one-year-old son.

Time Stands Still is a newly formed instrumental-vocal ensemble focused on performing music from the 17th century. Based in Cleveland, the ensemble explores the combination of bowed strings, harp, and voice, and brings improvisation, self-accompaniment, and new arrangements in the spirit of the Renaissance and Baroque to listeners today.

Soprano and harpist Anna O’Connell has performed on three continents; closer to home her voice has been praised for her “lovely tone” and “disciplined vibrato” (Cleveland Classical). After degrees in music education and choral conducting, as well as four action-packed years as a choral director for both a Catholic parish and an ecumenical compline service in the Anglican tradition, O’Connell turned her sights towards historical performance at Case Western Reserve University. Here, she picked up the gothic harp and triple harp for the first time, and has been focusing on projects of self-accompaniment from 14th-century German chant to folk music of the present day. She studies with Ellen Hargis, Dina Kuznetsova, and Maxine Eilander.

Noted for his “vivid” playing (San Francisco Classical Music Examiner), Addi Liu has been heard on RTHK Radio 4 (Hong Kong) and has appeared in performances with ensembles such as American Bach Soloists, Apollo’s Fire, Les Délices, Bourbon Baroque, and MUSA Baroque Ensemble, of which he is a founding member. A native of Hong Kong, he studied at the San Francisco Conservatory of Music and received a BM and MM with a Departmental Award in Excellence. He is an alumnus of Aspen Music School and Festival, Amherst Early Music Festival, Tafelmusik Baroque Summer and Winter Institutes, and La Petite Bande Summer Academy. Influential mentors include Jodi Levitz,
Elizabeth Blumenstock, and Julie Andrijeski. He is currently pursuing doctoral studies in Historical Performance Practice at Case Western Reserve University.