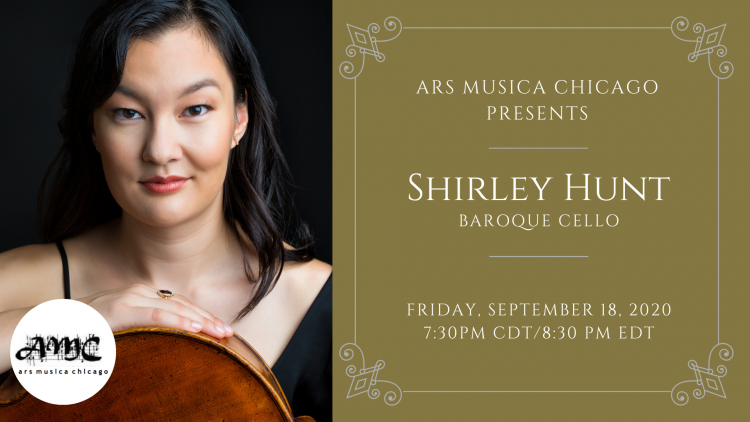 Ars Musica Chicago’s Summer 2020 Virtual House Concert Series concludes with a very special performance by one of the most sought-after baroque cellists and viola da gamba players in the country, Shirley Hunt. Shirley has put together a truly eclectic program for us, featuring works by J.S. Bach, Supriani, and other Italian masterworks for solo cello, along with an arrangement of one of Shirley’s favorite songs, “Nature Boy,” by Eden Ahbez.

A PDF of the program booklet is available for download here.

Ms. Hunt’s new CD J.S. Bach Suites & Sonatas Vol. 3 (to be released September 2020) includes a performance on a rare 18th century 5-string cello from the collection of the Museum of Fine Arts, Boston. Ms. Hunt is a founding member of The Cramer Quartet, a period instrument string quartet that explores and expands the sound world of gut strings. To learn more, visit shirleyhunt.net.

Admission is free. During this broadcast, 100% of your donations will go directly to the performer. Ars Musica Chicago is a 501(c)(3) not-for-profit organization, and your donations are tax-deductible to the extent permitted by law.

This concert is partially supported by a generous grant from the Illinois Arts Council Agency through federal funds provided by the National Endowment for the Arts.