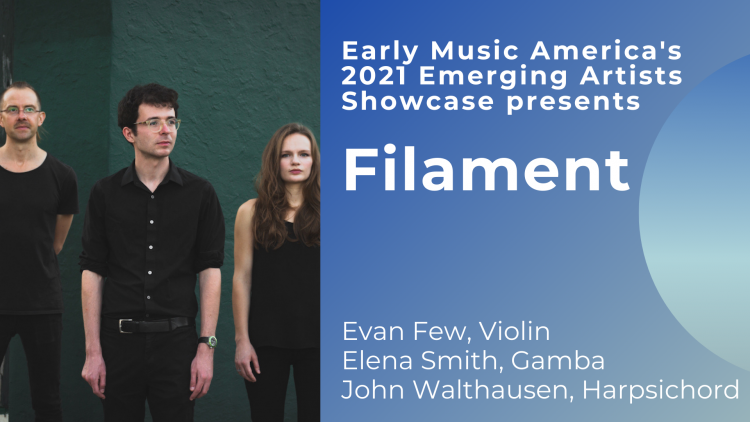 Among our many goals, one is to make a recording of the seven sonatas that make up Dietrich Buxtehude’s opus 1. This is a body of work we have come to love for its deep humanity and imaginative interweaving of voices, and that seems to draw out some of the best in us as an ensemble. We have already worked on and performed four of these sonatas. For this EAS work we performed two of the remaining three, filmed and recorded at Gloria Dei, “Old Swede’s” Church, in Southwark, Philadelphia. Gloria Dei was founded by settlers of colonial New Sweden in the 1670’s; the extant structure, completed in 1700, is the oldest standing church building in Pennsylvania and an iconic landmark in historic Philadelphia. We have performed at Gloria Dei twice in the past and developed close ties with the people who foster it, so it has become something of a home for us, and we believe it serves as an ideal space for this project — acoustically, aesthetically, contextually.

About Filament
Filament is a chamber ensemble, formed in 2019, of Philadelphia-based period-instrument soloists. Comprising a core trio of violin, viola da gamba, and keyboards, its respective founding members are Evan Few, Elena Smith, and John Walthausen. As constituents of the global early music community, they regularly join the ranks of such ensembles as Apollo’s Fire, Bach Collegium Japan, Chatham Baroque, New York City Opera, Philadelphia Bach Collegium, Tempesta di Mare, Venice Baroque Orchestra, and the Washington Bach Consort. As an ensemble, they share their collective passion for the rich trio repertoire of the 17th and 18th centuries with audiences in Philadelphia, the
Delaware River Valley, and beyond.