Mirie it is! Medieval English Music

Mirie it is! Medieval English Music 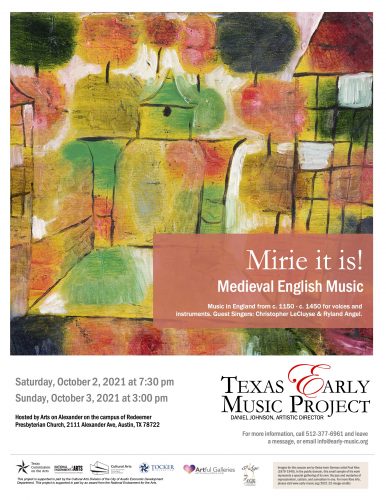 For its first in-person concert since February, 2020, TEMP is presenting music from really olde England in the 12th century up to the end of the early Renaissance, around 1450. There are only a handful of Middle English songs from before 1350 that have remained intact until now, and TEMP is performing eight of them. The music and texts in the Medieval repertoire of the concert deal with daily life, faith, the turning of the seasons–especially the joyful arrival of Spring and Summer and the specter of the advancing dreariness of Winter.

The Renaissance portion of the concert includes works by two of England’s most important composers, Leonel Power and John Dunstable, as well as anonymous motets in honor of famous individuals like St. Augustine of Canterbury and the martyr priest, Thomas Becket. Most early Renaissance polyphony is for three parts, and it was just awesome enough to be all the rage on the Continent as well, and it even had its own name: the contenance angloise, or English manner.

Our “return” concert has the single lines of the Medieval repertoire, the rich harmonies of the contenance angloise, and a couple of delightful Medieval English dances, performed by vielles, harps, recorder, and psalteries.

Our special guests are tenor Christopher LeCluyse, who is one of TEMP’s founding members, and frequent guests Ryland Angel (tenor and countertenor) and Mary Springfels (vielle and citole). They are joined by ten singers (including soloists Cayla Cardiff, Gitanjali Mathur, and Shari Alise Wilson) and four instrumentalists.

COVID Protocols
TEMP will be adhering to all State and City regulations, as well as guidelines from the CDC concerning masking and social distancing, as well as the requirements of our venue. We urge you to buy your tickets in advance, as the audience size will be limited so that the audience can be safely distanced.  The audience is strongly requested to be masked at all times; we will have masks available for your use as well. Please feel welcome to contact us with questions or concerns.

This concert is hosted by Arts on Alexander on the campus of Redeemer Presbyterian Church, 2111 Alexander Ave, Austin, TX 78722