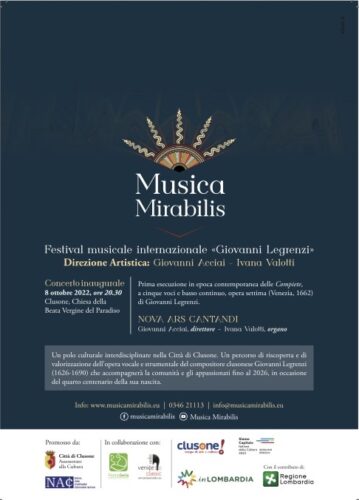 It is strange that a number of important repertoires have yet to receive or are just now receiving their first in-depth attention. Such is the case with the vocal sacred music of  GIOVANNI LEGRENZI (1626-1690).
Admired by Bach and Händel, Giovanni Legrenzi was undoubtedly one of the most important and influential composers of his generation, playing a leading role in the development of the new sacred concertato style that became established around the middle of Seventeenth century in northern Italy.
Apart from a few compositions survived in manuscript form, Giovanni Legrenzi’s entire output of sacred music is contained in the ten volumes consigned to the presses of the Venetian printers Alessandro Vincenzi (opus 1, 2, 3), Francesco Magni (opus 5, 6, 7 and 9), Giuseppe Sala (opus 15 and 17), and the Bologna publisher Giacomo Monti (opus 10) in the period between 1654 and 1692. Each publication is printed in the characteristic octavo format of 16 cm. wide by 22 cm. high, in individual «part-books» corresponding to the vocal and instrumental layout chosen by the composer at any given time.
Although the art of Legrenzi as composer of sacred music is sublime, to this day it is neglected and it is far from receiving from performers and musicians the attention, esteem and interest it deserves.
It is a world yet to be discovered!
Faced with an artistic personality of such immeasurable value, the city of Clusone (Bergamo-Italy) that gave him his birth could not remain indifferent.
Hence the idea, enthusiastically welcomed by the Mayor of Clusone and his Council, to dedicate an international music festival to his illustrious fellow citizen «Musica Mirabilis»., conceived and directed by IVANA VALOTTI and GIOVANNI ACCIAI.
Not just any music festival, like so many present in Italy, in Europe and in every part of the world, but a particular music festival, one of a kind, characterized by an original and unprecedented architecture, aimed at combining research and enhancement of Legrenzian repertoire not yet performed in contemporary times, with the training and promotion of young performing talents who are entering the international limelight, with competition tests and with seminars to study and deepen the musical performance practice of the past.  A festival which, after the inaugural concert on 8 October, held by the Collegium Vocale et instrumentale «Nova Ars Cantandi», which is dedicating a large part of its performing activity to the  opera of Giovanni Legrenzi, will unfold over a long period of time, up to 2026, year of the anniversary of the fourth centenary of the birth of the great composer, which took place precisely in the first ten days of August 1626.
In this perspective and with these assumptions, «Musica Mirabilis» will allow Giovanni Legrenzi’s music to come back to life, to break forever the bonds that still hold it hostage to the archives in which it is preserved and, seeing its artistic values ​​enhanced in the executive proposal , to finally enter an area of ​​social and cultural communication that enhances its historical value and preserves its memory over time.
As it should be.