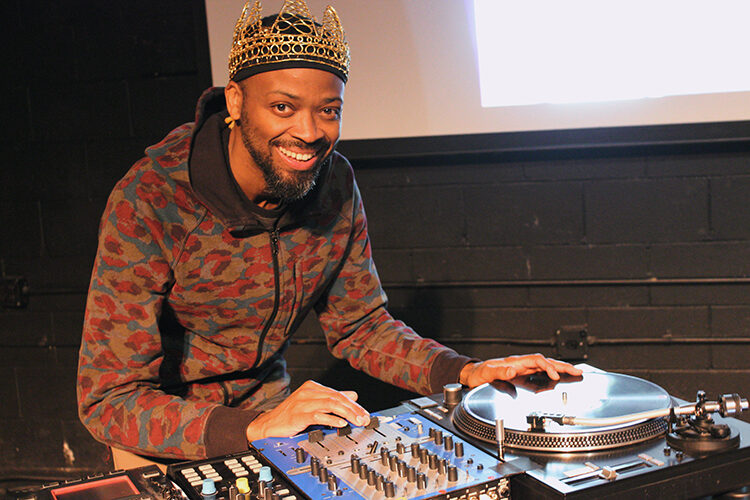 Remix culture and the concept of authenticity

Some would argue that remix culture is nothing new. While the term “remix” refers specifically to recorded music, the concept behind it and the practise of adapting, sampling, borrowing, and re-arranging has been with us for a very long time, from Bach to bebop.

As remixes or mashups become more popular than ever, the practice raises many questions about context, originality, authenticity, appropriation, and ownership.

Our conversation explores these questions through a historical lens that takes us from the 17th century to the present day.

Tickets just $5! Join live, or re-watch for 48 hours after the event concludes.

Jennifer Jenkins is in awe of the talent of her fellow panelists. She comes to this topic as someone who studied music as a child and lacked such talent, but later became obsessed with how copyright law shapes creativity and music. She is a Clinical Professor of Law at Duke Law school, where she has taught a (constantly updated) Music Copyright course since 2007, along with other Intellectual Property, Copyright, and Trademark courses. She is the Director of Duke’s Center for the Study of the Public Domain, where she heads its Arts Project – a project analyzing the effects of intellectual property on cultural production – and writes its annual Public Domain Day website. She has lectured around the world about musical borrowing, remix, and the law. She is the co-author (with James Boyle) of two comic books: Theft! A History of Music, a 2000-year history of musical borrowing and regulation and Bound By Law?, a comic book about copyright, fair use and documentary film, as well as the open coursebook Intellectual Property: Cases and Materials (5th ed, 2021). All of these educational resources are free online. Her next project is a new book on Music Copyright, Creativity, and Culture (forthcoming from Oxford University Press).

Appointed Artistic Director of Arion Baroque Orchestra in September 2019, Mathieu Lussier has been associated with les Violons du Roy from 2012 to 2018 as Associate Conductor and Conductor in residence. Previous appointments include Artistic Director and Conductor of the Lamèque International Baroque Music Festival, where he served from 2008 to 2014. As a soloist, Mathieu Lussier has energetically and passionately promoted the modern and baroque bassoon as solo instruments for more than two decades throughout North America and Europe. He also devotes considerable time to chamber music as a member of Ensemble Pentaèdre de Montréal. Since the summer of 2014, he is Professor at Université de Montréal where since September 2019 he also serves as Vice-Dean. His numerous solo recordings include over a dozen bassoon concertos (Mozart, Vivaldi, Fasch, Graupner, Telemann, and Corrette), a CD of bassoon sonatas by Boismortier, three CDs of music for solo bassoon by François Devienne, and two CDs of wind music by Gossec and Méhul. Mathieu Lussier is also a respected composer, with a catalogue of over 50 titles heard regularly in the concert halls of North America, Europe, Asia and Australia. In 2018, He composed the score for « La chute de l’empire américain » (The Fall of the American Empire) from Oscar winner Denys Arcand.

SlowPitchSound (Cheldon Paterson) is a Toronto-based composer, mentor, and explorer of sound and visuals. He has collaborated with creators from a wide range of disciplines including opera, jazz, classical, electronic music, theatre and dance. His unique style of music production, self proclaimed as “scifi-turntablism”, has graced stages around the world including Canada, Australia, USA, United Kingdom and Sweden. With a passion for depth and detail in his work, Cheldon is heavily inspired by nature, outer space, and dystopian sci-fi. Cheldon’s unique approach to making music includes turntablism, sample manipulation, and field recordings.

“To marry such a range in sounds smoothly is no small feat, but SlowPitchSound’s skill-set incorporate the playfulness of jazz and the world-building of science fiction.” – Exclaim!

Canadian violinist Cristina Zacharias enjoys a vibrant national and international performance career, based in Toronto. A core member of Tafelmusik Baroque Orchestra since 2004, she has performed across North America, Europe, Asia, and Australia, and can be heard on over 25 recordings for the ATMA, Analekta, CBC, BIS, Naxos, and Tafelmusik Media labels. Cristina appears annually at the Carmel Bach Festival, where she is the Assistant Principal Second Violin. Equally passionate about baroque, classical, and modern repertoire, Cristina is a frequent collaborator, guest soloist, and director with a diverse group of ensembles, including the Theatre of Early Music, Les Voix Baroques, Brandon Chamber Players, Aradia Ensemble, Group of 27 Chamber Orchestra, Pacific Baroque Orchestra, and I Furiosi. Cristina holds a MMus degree from McGill University.