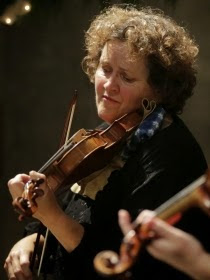 Laurel Wells will perform in a 1761 Georg Klotz viola (Mittenwald)

Meg Brennand will be using her 1730 Daniel Stadlmann violoncello (Vienna)

Internationally acclaimed as a Baroque violinist of expressive eloquence and technical sparkle, ELIZABETH BLUMENSTOCK is a long-time concertmaster, soloist, and leader with the San Francisco Bay Areas Philharmonia Baroque Orchestra and American Bach Soloists, and concertmaster of the International Handel Festival in Göttingen, Germany. In Southern California, she is Music Director of the Corona del Mar Baroque Music Festival. Elizabeth’s love of chamber music has involved her in several accomplished and interesting smaller ensembles, including Musica Pacifica, Galax Quartet, Ensemble Mirable, Live Oak Baroque, the Arcadian Academy, and Trio Galanterie. An enthusiastic teacher, Elizabeth is on the faculties of the San Francisco Conservatory of Music, the American Bach Soloists summer Festival and Academy, and the International Baroque Institute at the Longy School of Music.

Violinist CECILIA ARCHULETA has performed internationally as a soloist and as a chamber and orchestral musician. She has toured in North and South America with the Orquestra de la Juventud and the Toluca Symphony Orchestra, with which she appeared as concertmaster and a featured soloist. By special request of the First Lady of Mexico, Cecilia has performed before the President of Mexico, José López Portillo. Cecilia’s career in Los Angeles, her birthplace, brought numerous engagements, including a concert for Princess Grace of Monaco with American harpsichordist Igor Kipnis and a performance of the Bach Double Concerto with Jack Benny. She has played with Pacific Symphony Orchestra and the Pasadena Symphony Orchestra. In the Pacific Northwest, Cecilia is one of the most sought-after violinists for chamber music. She was the founding member of the Onyx Chamber Players, has performed as a soloist with the Octava Chamber Orchestra, and has played with the Philadelphia String Quartet for 12 seasons at the Olympic Music Festival. The summer of 2018 was her third season with the Friday Harbor Chamber Music Festival. Cecilia is a member of Northwest Sinfonietta and Concertmaster with Philharmonia Northwest and has performed with Seattle Symphony, Auburn Symphony, and the Pacific Northwest Ballet. On period violin, Cecilia plays with the Seattle Baroque Orchestra, on the Intimate Baroque Series, and with the Opus 20 String Quartet.

LAUREL WELLS is known for her work on both baroque and modern viola and violin. She has enjoyed an extensive and eclectic musical life, performing in Hong Kong, Norway, Canada, and throughout the United States. For twenty years she played violin with the Lyric Opera of Chicago, between seasons earning Masters degrees in violin and viola from Indiana University. She studied chamber music at the Banff Centre in Canada and performed extensively under the guidance of the Vermeer Quartet. Laurel was a member of the Northwest Chamber Orchestra, holding the position of principal viola. She is currently a member of the Pacific Northwest Ballet orchestra and performs often with the Seattle Symphony, the Seattle Opera, and at the 5th Avenue Theater. In the early music world, Laurel plays with the Seattle Baroque Orchestra, Pacific MusicWorks, and with her quartet, Opus 20, on the Gallery Concert. She has also participated in the Whidbey Island Music Festival, and the EMG’s Early Music Fridays. Laurel has recorded with Seattle Baroque, for NPR, and on the Wild Boar and Centaur labels.

Cellist MEG BRENNAND is known for her work on both modern and baroque cello. She is the cellist with the critically-acclaimed Onyx Chamber Players, with whom she has appeared in performances throughout the Northwest and live on Classical KING-FM 98.1. Onyx has received outstanding reviews for complete cycles of Mozart, Beethoven, Mendelssohn, and Brahms. In 2015, SHE performed the complete works of Beethoven for cello and piano with Onyx pianist David White. Meg is a long-time member of the Pacific Northwest Ballet Orchestra, including two well-received NYC tours in 2013 and 2016. She has also served on the cello faculties as an adjunct professor at Seattle Pacific University and at DigiPen Institute of Technology in Redmond. Meg performs on baroque cello with Seattle Baroque Orchestra and with Pacific Music Works. Past seasons have included performances with Pacific Baroque Orchestra in Vancouver, BC and the Portland Baroque Orchestra. In 2013 she performed two of the six Bach Suites for solo cello on Gallery Concerts. She has also appeared several summers on the Whidbey Island Music Festival. An avid chamber music cellist, Meg has been the cellist in chamber ensembles performing on the Auburn Chamber Music Series, Mostly Nordic Chamber Music Series, Second City Chamber Music Series, Jacobsen Series, Camerata Musica in Richland, and at the Bloedel Reserve. Meg is a graduate of the Eastman School of Music.