How can I get involved?

Anyone enthusiastic about raising awareness of early music can become an EMM Partner for free and join nearly 400 individuals and organizations who have already committed to celebrate Early Music Month in their own communities.

Visit our resources page for ideas about how you can join the Early Music Month celebration, how to list your EMM event, and how EMA can celebrate YOU!

Early Music America provides funding for members to enhance their skills at early music workshops throughout North America and helps pay for musicians to attend the Young Performers Festival and Emerging Artists Showcase. Each year, we receive many, many more qualified applicants than we can fund.

Help EMA provide more artistic development opportunities to musicians of all ages by making a donation to the #WeAreEarlyMusic campaign during Early Music Month.

Selections submitted members of the EMA Board, Emerging Professional Leadership Council, and Staff. Come back every day during March for more! 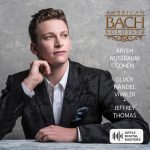 In this piece, the character feels lost at sea, despite having thought they were close to the shore – amid the storms and the tempests of the current moment, it seems to be a set of emotions many are experiencing right now.

I have lost a few months of work, and it is certainly a challenging time. I’m taking the time to learn other music and roles I have coming down the pipeline in the coming years, and I’m trying to keep finding silver linings in the midst of this crazy time! 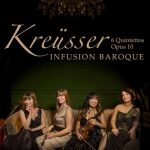 This selection is from the latest recording of Infusion Baroque. I was on tour in Florida with this ensemble when the WHO declared COVID 19 a world-wide pandemic. I think we will all remember where we were that day when everything changed. Being away from home while this was happening was particularly stressful. Everything became uncertain, from whether our concerts would be able to go on as scheduled, to what life would be like when we got home and had to go into self-isolation. By some miracle, each of our performances went on, and each venue we played at closed to the public right after our concerts. Even though at times it was hard to get into “performance mode,” I’m glad we did, because each concert became a respite from everything else that was going on, a few hours of normalcy during very abnormal times. I’m also grateful to have been in the company of such good friends and colleagues, who maintained the highest level of professionalism throughout a very difficult and uncertain time.

The COVID 19 pandemic has been devastating for those of us in the performing arts. The spring season is always a busy time, trying to balance rehearsals, concerts, and teaching lessons. However, I, like so many others, are now at home, weathering the storm, not knowing when we will be able to work again or if we’ll be able to pay the bills in the coming weeks or months. We know musicians are not the only ones suffering, and it is hard to fathom the vast implications this pandemic will have on our communities. However, we are all in this together. I know we all look forward to making music together again some day. 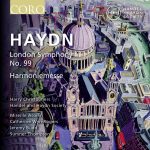 There are many occasions when professional choral singers have the opportunity to sing the great liturgical works of classical composers like Mozart, Schubert, and Haydn. However it is rare to find yourself in a scenario where you’re surrounded by the best musicians you know, as far as the eye can see. This is always the case with the Handel + Haydn Society, a group that champions the precise, historically informed performance and recording of masterworks by composers who span the timeline from Bach to Beethoven.

The first time I recorded an album for commercial release with the H+H Chorus was Haydn’s Creation in 2015. I remember being in awe, sitting on the grand wooden stage of Boston Symphony Hall, staring out at the 16 Greek and Roman statues circling the second balcony before our performance began. I had never seen so many microphones in my life.

One trademark of Harry Christophers (Artistic Director of H+H) is his careful attention to the detailed delivery of text. He forces you to really spit out the text in a way you never have before. “”Sing as you speak!”” he says in a charming, somehow wise British accent. Although I’m fairly certain that if I spoke Latin in this way to an ancient Roman they would have me committed, I buy in. The results speak (or sing) for themselves.

A former voice teacher and mentor always used to warn me not to become another one of those “”Boston choral singers.” Try as I might, I can’t quite imagine myself any other way.

The outbreak of COVID-19 has led to the cancellation of 11 performances and counting. There is no word for it other than “devastating.” I commend the leadership of groups like EMA, who are helping freelance artists in their time of need.

Making a gift to EMA allows our programs to flourish and in doing so, you play an important part in broadening the network of early music listeners. No matter how large or small your contribution, please know every dollar counts and will make a difference in these endeavors. Please help EMA today as we provide essential training, development opportunities and performance experiences for the early music community we all love. Simply use our online donation form and designate your gift to Early Music Month. You may also give us a call in the office: 412-642-2778

Sponsors’ names/logos will be featured in connection with all Early Music Month communications, including partner-only emails, on our website and social media promotions, and all printable Early Music Month materials. Sponsors will receive digital advertising on the Early Music America website and in the January through March issues of our monthly newsletter, E-Notes. More information and pricing is available by emailing: ads@earlymusciamerica.org.