Mahan Esfahani, the first harpsichordist to be signed by Deutsche Grammophon in a generation or two, is an unusual member of that limited species. His jaunty poses make him look a bit like an Iranian-American Stephen Colbert. His first CD for DG’s early-music-baroque-classical Archiv line last year made unprecedentedly strange bedfellows of the Bach family, Henryk Gorécki, and Steve Reich — and he made them fit. 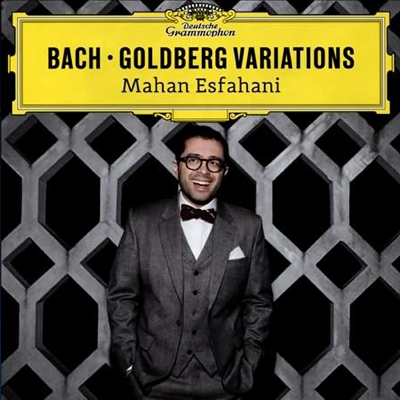 So with that in mind, it may have been surprising to see Esfahani follow up his imaginative debut with something as overdone as J. S. Bach’s Goldberg Variations (198 listings on ArchivMusic.com as of Sept. 2016). Although Esfahani’s take on this set of 30 variations on a plaintive aria doesn’t overflow with revelations, it does show off his brilliant technique — and as a result, there are some spectacular passages to be savored.

The pioneering 20th-century harpsichordist Wanda Landowska put the Goldbergs on the map, yet it was a pianist, Glenn Gould, who really punched it into the center of the Baroque repertoire, where it has remained for the last 60 years.  While it has become a much-trodden proving ground for established and emerging pianists — not to mention aspiring transcribers for other instruments — it still fits most comfortably as written onto a two-manual harpsichord, particularly in passages where, on a single keyboard, the hands cross over dangerously in each other’s way.

Esfahani observes all the repeats in the aria and variations, but his speeds are just fast enough so that the 78-minute performance doesn’t need more than one CD (most slower versions with all the repeats require two discs). There are long pauses after each variation until Variation 26, after which the next few follow each other almost immediately. In the opening statement of the aria, Esfahani deliberately omits much of the appoggiatura — mostly grace notes — the first time around, yet restores them on the second pass of the Aria at the end of the recording. Only in Variation 19 does Esfahani use the harpsichord’s lute stop, alternating between that and the normal stop on the repeats.

One questionable habit Esfahani indulges in during the arias is the “breaking of hands” — putting the bass hand down before the treble hand, even though they are supposed to be played simultaneously — a long-outmoded practice of Romantic-era pianists, like Paderewski, that disrupts the relaxed rhythm of the music here. He gets a bit bogged down in ornaments that distort the line in the repeats of Variation 13, and loses the thread of the thicket of introspective chromatic writing in Variation 25 — the so-called “Black Pearl” Adagio which, Esfahani whimsically writes, “seems to come from outer space.”

Nitpicking aside, most of the variations are rendered with lively, needle-sharp precision and in Variation 23, some welcome humor. As Esfahani’s profile rises, I imagine he will get a few more passes at the Goldbergs before long — and DG does him the rare favor of placing this on its regular vintage yellow label rather than the Archiv imprint.