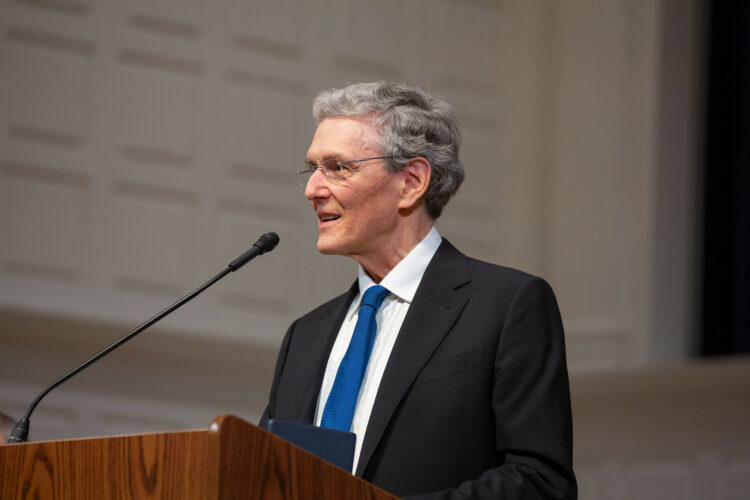 The medal is the most prestigious award conferred by the School of Music. Its namesake, Samuel Simons Sanford, was the first professor of applied music at Yale and one of the founding professors of the Yale School of Music. A gifted pianist, Sanford was also one of Yale’s most generous patrons, and the award was established to honor Sanford’s dedication to Yale and music. Past medal recipients include Aaron Copland, Robert Shaw, Pierre Boulez, and Yo-Yo Ma.

The award comes during Boston Baroque’s 50th season, a momentous milestone year for the organization and Music Director Martin Pearlman. As the founder and artistic leader of North America’s first permanent Baroque orchestra, Mr. Pearlman has been a vital voice in the American early music movement since the 1970s.

Mr. Pearlman’s artistic leadership over the last 50 years has led Boston Baroque through many groundbreaking moments. Boston Baroque was the first period instrument orchestra to get a major record deal, producing 26 commercial recordings over the last 50 years. The organization was the first period instrument orchestra to perform at Los Angeles’ Disney Hall, San Juan’s Casals Festival, and numerous festivals in the United States and abroad. Boston Baroque has also given numerous American period-instrument premieres including Mozart’s The Magic Flute and Don Giovanni, and Boston’s first complete cycle of Monteverdi’s three surviving operas.

“Martin Pearlman and Boston Baroque played a key role in founding the early music movement in North America,” Early Music America Executive Director David McCormick said, “and continues to be a leader in the field today. Countless musicians and music-lovers were introduced to period practice through Boston Baroque recordings—some went on to found or lead other ensembles and early music programs. Boston Baroque’s impact is felt not only in Boston, but also in concert halls and classrooms across the country and around the world.”

Boston Baroque founder, music director, and conductor Martin Pearlman is one of this country’s leading interpreters of Baroque and Classical music on period and modern instruments. In addition to Boston Baroque’s annual concert season, Mr. Pearlman tours in the United States and Europe and has produced twenty-six major recordings for Telarc and Linn Records. Mr. Pearlman’s completion and orchestration of music from Mozart’s Lo Sposo Deluso, his performing version of Purcell’s Comical History of Don Quixote, and his new orchestration of Cimarosa’s Il Maestro di Cappella were all premiered by Boston Baroque.

Highlights of his work include the complete Monteverdi opera cycle, with his own new performing editions of L’incoronazione di Poppea and Il ritorno d’Ulisse; the American premiere of Rameau’s Zoroastre; the Boston premiere of Rameau’s Pigmalion; the New England premieres of Gluck’s Iphigénie en Tauride and Alceste; and the Beethoven symphonies on period instruments. Mr. Pearlman is also known for his internationally acclaimed series of Handel operas including Agrippina, Alcina, Giulio Cesare, and Semele. He made his Kennedy Center debut with The Washington National Opera in Handel’s Semele and has guest conducted the National Arts Center Orchestra of Ottawa, Utah Opera, Opera Columbus, Boston Lyric Opera, Minnesota Orchestra, San Antonio Symphony and the New World Symphony. Mr. Pearlman is the only conductor from the early music field to have performed live on the internationally televised GRAMMY® Awards show.

Mr. Pearlman grew up in Oak Park, Illinois, where he received training in composition, violin, piano, and theory. He received his Bachelor of Arts degree from Cornell University, where he studied composition with Karel Husa and Robert Palmer. In 1967–1968, he studied harpsichord in Amsterdam with Gustav Leonhardt on a Fulbright Grant, and in 1971 he received his Master of Music in composition from Yale University, studying composition with Yehudi Wyner and harpsichord with Ralph Kirkpatrick. After moving to Boston, he performed widely as a solo harpsichordist in the U. S. and Europe, and in 1973 he founded the first American period-instrument orchestra, Banchetto Musicale, now called Boston Baroque. He also served as Professor of Music in the Historical Performance department at Boston University’s School of Music.

Recent compositions by Martin Pearlman include a string quartet, piano works, a comic chamber opera The Life and Opinions of Tristram Shandy, a three-act work on Finnegans Wake, as well as The Creation According to Orpheus, for solo piano, harp, percussion and string orchestra. He has also composed music for three plays of Samuel Beckett, commissioned by and premiered at New York’s 92nd Street Y and performed at Harvard University.

The six-time GRAMMY®-nominated Boston Baroque is the first permanent Baroque orchestra established in North America and, according to Fanfare Magazine, is widely regarded as “one of the world’s premier period instrument bands.” The ensemble produces lively, emotionally charged, groundbreaking performances of Baroque and Classical works for today’s audiences performed on instruments and using performance techniques that reflect the eras in which the music was composed.

Boston Baroque has expanded its reach globally through its partnership with IDAGIO, the world’s leading classical music streaming service. Its 2021-2022 Season was the first full season by a Baroque orchestra to stream on the platform, and brought together virtual audiences from across five continents (North America, South America, Asia, Europe, and Australia) and over 17 countries.

Founded in 1973 as “Banchetto Musicale” by Music Director Martin Pearlman, Boston Baroque’s orchestra is composed of some of the finest period instrument players in the United States, and is frequently joined by the ensemble’s professional chorus and by world-class instrumental and vocal soloists from around the globe. The ensemble has performed at major music centers across the United States and performed recently in Poland for the 2015 Beethoven Festival, with sold-out performances of Monteverdi’s Vespers of 1610 in Warsaw and Handel’s Messiah in Katowice.

Boston Baroque reaches an international audience with its twenty-six acclaimed recordings. In 2012, the ensemble became the first American orchestra to record with the highly-regarded UK audiophile label Linn Records, and its release of The Creation received great critical acclaim. In April 2014, the orchestra recorded Monteverdi’s rarely performed opera, Il Ritorno d’Ulisse in patria, which was released on Linn Records and received two nominations at the 2016 GRAMMY® Awards.