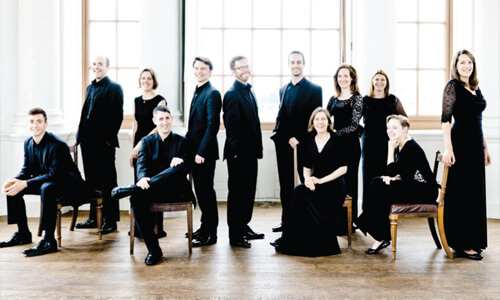 ABOUT THE PROGRAM
Working without a conductor, the intensely collaborative singers of Stile Antico have won acclaim as one of the world’s most vibrant and expressive vocal ensembles. They return to BEMF for a virtual performance celebrating the North American release of their new CD for Decca Classics, titled The Golden Renaissance: Josquin des Prez.

The first composer to have his works widely published, Josquin enjoyed great international renown, and his stunningly beautiful music was hugely influential in the development of the High Renaissance style. Marking the 500th anniversary of the composer’s death, this sumptuous program of highlights from the recording features excerpts from Josquin’s superb Missa Pange lingua and several of his best-loved motets and chansons, from the whimsical El Grillo (The Cricket) to the plangent Mille regretz (A Thousand Regrets).

This program is presented in partnership with the Morgan Library & Museum, New York.

ASSOCIATED EVENTS
On Friday, February 26, 2021, at 9:30pm EST, we will hold a Post-Concert Q&A Session with members of the ensemble, moderated by BEMF Executive Director Kathy Fay, live on Zoom and YouTube.

ABOUT THE ENSEMBLE
London based ensemble Stile Antico is firmly established as one of the world’s most accomplished and innovative vocal ensembles. Working without a conductor, its twelve members have thrilled audiences on four continents with their fresh, vibrant and moving performances of Renaissance polyphony. Its bestselling recordings have earned accolades including the Gramophone Award for Early Music, Diapason d’or de l’année, Edison Klassiek Award, and Preis der deutschen Schallplattenkritik. The group has received three GRAMMY nominations and performed live at the 60th GRAMMY Awards at Madison Square Garden.

Stile Antico’s performances are often praised for their immediacy, expressive commitment, and their sensitive and imaginative response to text. These qualities arise from the group’s collaborative working style: members rehearse and perform as chamber musicians, each contributing artistically to the musical results. The group is also noted for its compelling programming, which often draws out thematic connections between works to shine new light on Renaissance music.

The Boston Early Music Festival is supported by the Massachusetts Cultural Council, National Endowment for the Arts, Constellation Charitable Foundation, and WCRB Classical Radio Boston, as well as a number of generous foundations and individuals from around the world.