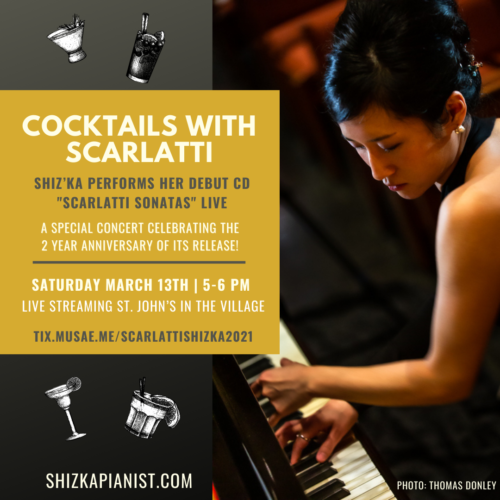 New York—Tuesday, March 2, 2021 — KeyMedia Public Relations on behalf of classical artist ShiZ’ka is proud to announce the live streaming concert COCKTAILS WITH SCARLATTI to celebrate the two-year anniversary of the young pianist’s debut album SCARLATTI SONATAS. The album which features fourteen of the renowned composer Giuseppe Domenico Scarlatti’s sonatas was released in February 2019 with a glowing review from International Piano leading the way to what has become a formidable performing and recording career as a solo classical pianist.

ShiZ’ka will play the entire album in the order as it appears on the recording. When asked about the past two years and how releasing the album has changed her career, she shares, “Releasing Scarlatti Sonatas has changed my life. I have been able to reach so many more people now that my playing can be heard on many of the music platforms. I hear from people around the world and that is so exciting to me. And now with live streaming, my audience continues to grow. I feel the possibilities are endless.”

Her debut album SCARLATTI SONATAS was engineered by Bill Siegmund and recorded at The Performing Arts Center at Purchase College in New York. ShiZ’ka continues to expand her catalog of recordings with her second album BRILLIANCE & FERVOR released in July of 2020. The album is a live album of the concert which was recorded at St. John’s in the Village in New York’s West Village.

Other news for this rising star, ShiZ’ka will return to her own country to perform her first professional concert since she moved to the United States in 2013. She will perform August 6, 2021 at the Hyogo Performing Arts Center.  The fashion world is also taking notice of her grace and elegance as world renown accessories designer Diana Broussard who designed for Dior, Gucci and Calvin Klein prior to starting her own line, will be featuring the young ingenue wearing her designs, in her upcoming promotions campaign for spring accessories.

COCKTAILS WITH SCARLATTI will be an hour program, with a 5-minute intermission. It promises to be uplifting and delightful, with many of her fans tuning in to watch ShiZ’ka play the music that started their love affair with her. With tickets/donations ranging from $5-$100 through the Musae portal, the award-winning producers provide outstanding sound quality handled by world class sound engineers and one 360-degree and two HD cameras for a sophisticated experience at live streaming.  Link to full program and to purchase tickets: tix.musae.me/scarlattishizka2021.

ABOUT SHIZ’KA: Originally from Amagasaki, a relatively small city in Japan, ShiZ’ka has been playing classical piano since the age of four. Selections from her debut album SCARLATTI SONATAS are currently in rotation on various classical radio stations including New York’s WQXR, Classical King 98.1, Seattle, and New Jersey’s WWFM, “Between the Keys” with Jed Distler.  Various tracks from her second album BRILLIANCE & FERVOR, a live album from her concert in 2020 of the same name, is in rotation on WGBH and WCRB, Boston. PianoDay.org 2021 will be featuring her performance from the album of Prokofiev’s Sonata in d minor Op. 14 Andante on their curated Soundcloud & Spotify playlist and St. John’s in the Village will be featuring her performance of Prokofiev’s Sonata in d minor Vivace on their Piano Day 2021 YouTube channel broadcast. She has studied with renowned Japanese teachers Toshimi Sakou, Keita Kosaka, Makoto Yamahata, and Mako Okamoto. She has also studied at prominent music schools including Doshisha Women’s College of Liberal Arts and Berklee College of Music. Currently, she lives in New York City. For more information please visit: SHIZKAPIANIST.COM

ABOUT GIUSEPPE DOMENICO SCARLATTI: Known as Domingo or Doménico Scarlatti; (Naples 26 October 1685 – Madrid, 23 July 1757) he was an Italian composer. He is classified primarily as a Baroque composer chronologically, although his music was influential in the development of the Classical style. Like his renowned father Alessandro Scarlatti, he composed in a variety of musical forms, although today he is known mainly for his 555 keyboard sonatas.

“ShiZ’ka communicates deep longing and adventurousness, spectacular “Brilliance and Fervor” as the program is named. There were many colors and beautiful clarity of the motivic ideas of the Prokofiev Sonata … this artist has much to offer as a focused, athletic performer with solid knowledge of style and ability to execute an exciting program of music. I found myself shouting “brava!” – West View News

“There is no doubting that ShiZ’ka has a resonance with Scarlatti’s style, and her disciplined prestidigitation is perfectly in place. The order of the sonatas works beautifully.” – International Piano, London