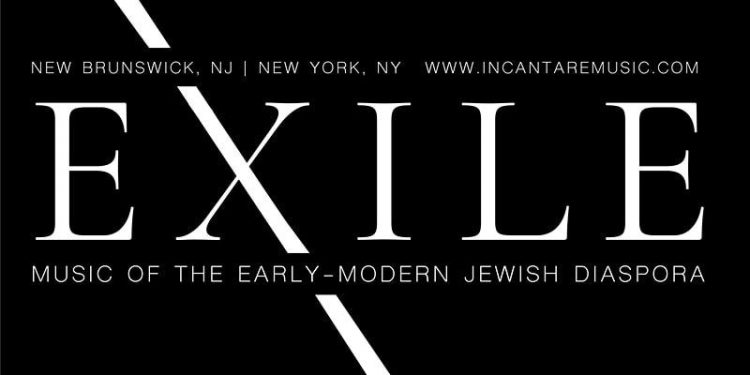 Incantare is a chamber ensemble of Baroque violins and sackbuts (early trombones) whose members are some of the most highly regarded players in the nation, touring throughout the United States and abroad. The sextet has assembled a unique program exploring the continuities and influences between Jewish and non-Jewish music and musicians in Renaissance and early modern Europe in collaboration with four virtuoso singers and musicologists from Rutgers and Yale University. The events, which feature performances as well as commentary, are free and open to the public. The Rutgers Performance will also be live streamed.

Gotham Early Music Scene, Inc. (GEMS), the service and advocacy organization for early music in New York City, is forwarding the following information to Howard Gilman Foundation on behalf of Incantare.  We thank you for your attention!

An ensemble of violins and sackbuts

The ensemble Incantare, in collaboration with Rutgers faculty and specialists in early music, explores the continuities and influences between Jewish and non-Jewish music and musicians in Renaissance and early-modern Europe. The program sheds new light on the powerful role played by Jews in the formation of musical culture during this volatile period, when the foundations of the European musical tradition were forged.

EXILE is closely tied to the forthcoming book Music and Jewish Culture in Early Modern Italy: New Perspectives, coedited by Lynette Bowring, Rebecca Cypess, and Liza Malamut. As explained by Dr. Cypess, of Mason Gross School of the Arts, the book “demonstrates that musical culture was fluid and shared between Jews and non-Jews, and that this shared cultural space involved complexities of identity and meaning.”

Jews are often thought of as segregated from their non-Jewish neighbors in Europe, especially through physical barriers such as the walls of the Italian ghettos. But the reality was more complex than this, says Cypess: “While Jews were subject to many restrictions and even persecution, there was extensive contact and collaboration between Jews and non-Jews. Professional Jewish musicians, theorists, and instrument builders participated actively in the musical life of early-modern European cities.”

The concerts will feature Incantare’s core ensemble of violins and sackbuts with singer specialists Jolle Greenleaf, Clara Osowski, Garrett Eucker, and Jonathan Woody; as well as special guests and author contributors Dongmyung Ahn on violin, Rebecca Cypess on organ and harpsichord, and Lynette Bowring joining the narration. The concert will contain narration and commentary on the music.

All audience members ages 5 and up must show proof of full vaccination as well as an ID. People who have an exemption to the vaccine requirement for medical or religious reasons need to show a negative PCR test within 72 hours of the event. ALL event attendees are required to wear a mask covering the mouth and nose for the duration of their time inside Rutgers and the CJH. Cowls, bandanas, or masks with valves are not permitted. Details for each venue are at https://www.masongross.rutgers.edu/news-events/health-safety/ and https://www.cjh.org/visit/plan-your-visit

Incantare’s concerts highlight the musical and cultural connections of under-explored musicians from the Renaissance and early Baroque periods, especially music by composers, singers, and instrumentalists from marginalized communities in early modern Europe. Founded by Alice Culin-Ellison, Liza Malamut, Ben David Aronson, and Garrett Lahr, the ensemble strives to discover, research, transcribe, teach, and perform works that may not have been heard since their conception.

Incantare debuted to enthusiastic crowds at the 2018 Twin Cities Early Music Festival, where they were chosen as one of “the week’s five best Twin Cities classical concerts” by the Star Tribune. Since then, they have performed programs throughout the United States, with appearances at the Pittsburgh Renaissance and Baroque series in collaboration with Chatham Baroque, Hobart & William Smith Colleges, LeMoyne College, The Perkins Mansion in Rochester, and the International Trombone Festival, where they were praised for their “beautiful and cohesive sound.” Incantare’s EXILE program, currently touring in Minnesota, New Jersey, Wisconsin, and New York, was recognized as an “innovative project” by the Paul R. Judy Center for Innovation and Research. EMAg, the Magazine of Early Music America, reported that audiences have left the ensemble’s concerts “with a sense of awe.”

The consort of sackbuts and violins has a long history and a unique sound that incorporates the vocal qualities of both instruments while retaining each of their distinct timbres, making it the perfect medium for performing the beautiful works from this rich musical time period. The ensemble’s name is a play on words that links directly to the group’s mission as early instrumentalists. “Incantare” means “to enchant” in Italian, and “to sing” in Latin. Incantare seeks to enchant, charm, hypnotize, and spellbind by singing through their instruments.

About Mason Gross School of the Arts
Established in 1976, Mason Gross School of the Arts is the flagship public arts conservatory of New Jersey and a division of Rutgers, The State University of New Jersey. Founded in 1766, Rutgers is the nation’s eighth-oldest institution of higher learning, a leading Big Ten public research university with more than 70,000 students, and a member of the prestigious Association of American Universities. The Mason Gross School is home to the departments of Art & Design, Dance, Music, and Theater as well as Rutgers Community Arts, Rutgers Arts Online, the Rutgers Filmmaking Center, and the Rutgers Printmaking Studio. The school has an enrollment of approximately 861 undergraduates and 308 graduate students across five disciplines, supported by approximately 324 faculty and 69 staff. Students at Mason Gross hail from 31 states and territories and 23 countries. Mason Gross is one of the most selective schools at Rutgers–New Brunswick, ensuring that students have the opportunity to work closely with accomplished artists in their fields.

About the Center for Jewish History

The partners’ archives comprise the world’s largest and most comprehensive archive of the modern Jewish experience outside of Israel. The collections span five thousand years, with more than 5 miles of archival documents (in dozens of languages and alphabet systems), more than 500,000 volumes, as well as thousands of artworks, textiles, ritual objects, recordings, films, and photographs.

The Center’s experts are leaders in unlocking archival material for a wide audience through the latest practices in digitization, library science, and public education. As one of the world’s foremost research institutions, the Center offers fellowships, a wide array of exhibitions, symposia, conferences and lectures. The Center is a Smithsonian Affiliate, and is a partner of the Google Cultural Institute.

American Society for Jewish Music, the Jewish Music Forum, the Debbie Friedman School of Sacred Music, Rutgers University’s Mason Gross School of the Arts, Allen and Joan Bildner Center for the Study of Jewish Life, Department of Music, and Department of Italian; the concerts are also supported by a grant from the Paul R. Judy Center for Innovation and Research.