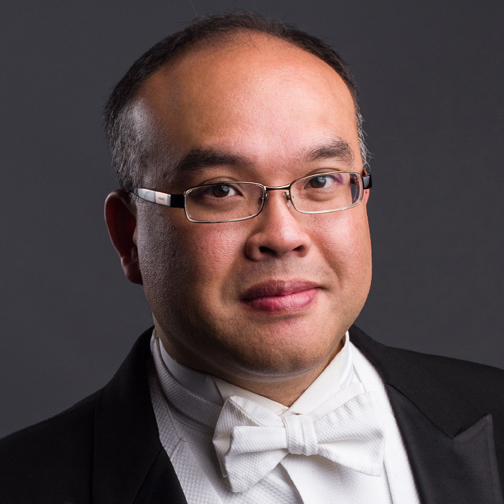 Dr. Leong’s teaching interests include presenting a wide repertoire to singers and audiences alike. As a choral clinician, Dr. Leong has worked with high school choruses from the United States and Canada. He has conducted various ensembles in many performances around the United States and abroad. Recent international tour destinations include the United Kingdom, Ireland, Germany, Austria, Poland, the Czech Republic, Hungary, Australia, and Japan.

Dr. Leong earned a doctoral degree in Choral Conducting from Boston University, where he studied with Ann Howard Jones, David Hoose, Jeremy Yudkin, and Craig Smith. His dissertation, entitled “The Hymn Settings of Ludwig Senfl’s Liber vesperarum festorum solennium, D-Mbs Mus. Ms. 52,” is the 2008 winner of the Julius Herford Prize, awarded nationally each year by the American Choral Directors Association for the outstanding doctoral thesis in choral music. At Harvard University, where he graduated with a Ph.D. in Biophysics, he worked closely with Jameson Marvin for many years and served as Resident Tutor and Associate in Music at Adams House.

Dr. Leong has taught undergraduate and graduate courses in choral conducting and choral literature at Harvard and Boston University and has won several teaching awards. He served on the faculty at the Cambridge Center for Adult Education and the Osher Lifelong Learning Institute at Tufts University and is a Research Assistant for Carl Philipp Emanuel Bach: The Complete Works, an editorial and publishing project of the Packard Humanities Institute.

Dr. Leong is a graduate of Princeton University where he earned a bachelor’s degree in Chemical Engineering and directed the Princeton Katzenjammers. He has studied voice with Martha Elliott and performed as a tenor with numerous choral ensembles in the Boston area. He appears with the Choir of the Church of the Advent on the Arsis label.

Dr. Leong is a native of suburban Philadelphia.