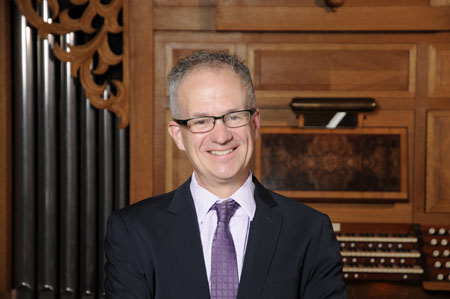 BRUCE NESWICK is the recently appointed Interim Director of Music at Trinity Cathedral, having come from Indiana University, where he was Associate Professor of Organ.  Prior to joining the faculty at IU, Mr. Neswick was the Director of Music at the Cathedral of Saint John the Divine, New York City, where he conducted the Choir of Girls, Boys and Adults and had oversight of the musical life of that historic church.  Active in the field of church music, Mr. Neswick holds Fellowship degrees from the American Guild of Organists and the Royal School of Church Music.  He has conducted dozens of summer camps and festivals for boy and girl choristers and has been commissioned to compose for performers and churches throughout North America.  Mr. Neswick’s skill at improvisation garnered him three first prizes from the 1989 San Anselmo Organ Festival; the 1990 American Guild of Organists' national convention in Boston; and the 1992 Rochette Concours at the Conservatoire de Musique in Geneva, Switzerland.  He is a graduate of Pacific Lutheran University and Yale University, and his organ teachers have included David Dahl, Margaret Irwin-Brandon, Gerre Hancock, Robert Baker and Lionel Rogg.  As a recitalist, Mr. Neswick has performed extensively throughout the United States and Europe and has been a frequent performer at national and regional conventions of the American Guild of Organists.  In 1994, he played the opening convocation for the national AGO convention held in Dallas, Texas, and he was a featured artist at national AGO conventions in Seattle (2000), Washington, DC (2010) and Boston (2014).  He is represented by Phillip Truckenbrod Concert Artists.