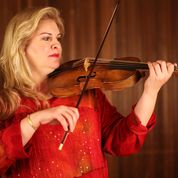 Jeanne Johnson's performances on series, tours, festivals and recordings in the United States and abroad have been hailed as “stunningly effusive,” and “delivered with gusto,” resulting in National Public Radio, Canadian Broadcasting Corporation and local broadcasts.  A winner of an Early Music America Professional Development Award in 2002, Jeanne has been featured on several "Harmonia" and "Performance Today" broadcasts, and gave a recital on the Yale University Collection of Musical Instruments series in 2005.  Performances with her group Music of the Spheres include the Frick Collection; the Tage Alter Musik Festival in Regensburg, Germany; the Berkeley and Bloomington Early Music Festivals; and the San Francisco Early Music Society series.  She has been concertmaster for the Washington Bach Consort, and has toured and performed with many groups including Chatham Baroque, Tafelmusik, Philharmonia Baroque Orchestra, Portland Baroque, Brandywine Baroque, Musica nel Chiostro in Tuscany, Bloomington Baroque, the Magnolia Baroque Festival, the Carmel Bach Festival, and the Atlanta Symphony.  On the other end of the spectrum, Jeanne has toured with Vince Gill and Amy Grant, and has performed and recorded with the Nashville Chamber Orchestra, Turtle Island String Quartet and guitarist John Jorgenson, spanning styles from country to the gypsy jazz of Django Reinhardt.  She has recorded on the Magnatune and Centaur labels.  Jeanne has served on the faculty of Clayton State University and has maintained a private teaching studio for twenty years.  She has also worked as a radio host for WABE, Atlanta’s classical and NPR station.  Jeanne studied with James Buswell and Stanley Ritchie, receiving performance degrees with honors from Indiana University and New England Conservatory.