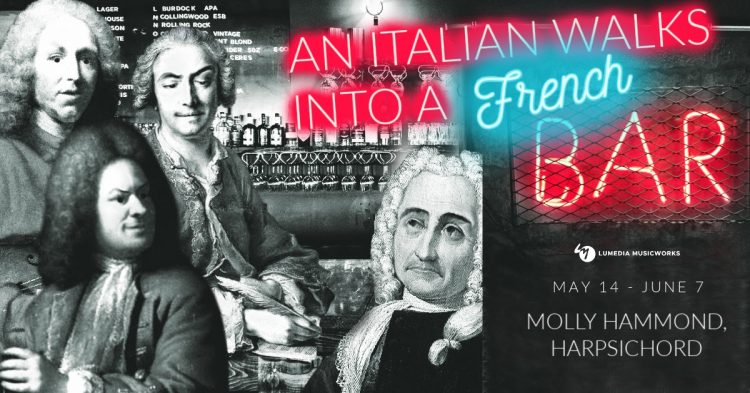 The short film is a lighthearted take on a harpsichord concert, performed by Molly Hammond of Houston. A cast of eight characters dramatize the music by Benedetto Marcello, Jean-Philippe Rameau, Michel Corrette, Jacques Duphly, Jean-Baptiste Forqueray and Joseph-Nicolas-Pancrace Royer.

Lumedia Musicworks will present “An Italian Walks Into a French Bar” at 7:30 p.m. Friday, May 14, on its website. The harpsichord performance by Molly Hammond of Houston tells a lighthearted story, presented in a short film.

“This is a fun and eclectic celebration of some of early music’s more extroverted composers,” said Julianna Emanski of Frisco, Lumedia’s artistic director. “For those who haven’t yet ventured back out to the bars, we’ve created an at-home, people-watching experience.”

Inspired by the music, Emanski and Hammond created the story line that unfolds throughout the concert. The film is directed by Emanski and shot by Caleb Jones of Arlington. Thane Isaac of Denton, a Baroque violinist and frequent actor in Lumedia’s productions, plays the central role of the comic French bartender.

Dallas-based nonprofit Lumedia is committed to sharing and performing early music – music composed before 1750 – in new ways. Most of its 2020-21 season debuted online, and all past performances are available at www.lumediamusicworks.com.

A pianist as well as a harpsichordist, Hammond has performed throughout Texas, Louisiana, and in Mexico, England, Australia and New Zealand.

The story was filmed at J. Theodore Restaurant & Bar and Rare Books Bar, both in Frisco.