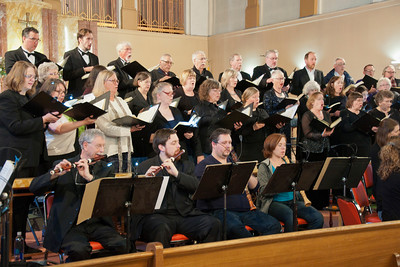 Musikanten (German for "musicians") was formed by Artistic Director Kerry Krebill in 1979 in
Bethesda MD, as a project for her masters degree in choral conducting at the Catholic University of
America. In its 37 seasons, the ensemble has made over a thousand appearances, including DC area
concerts at the National Gallery of Art, the Smithsonian Institution, Kennedy Center, and venues in
Pennsylvania, Virginia and Maryland, as well as 22 international tours, including Maestra Krebill's 50th
birthday celebration singing Monteverdi's Vespers in Venice with the acclaimed ensemble now known as
the Venice Baroque Orchestra. The group continues to perform in the Washington area, appearing each year at a local First Night celebration, singing a traditional Latin Mass at St. Mary's in downtown DC, and to tour; in September 2007 Musikanten made its first foray to South America, performing in Buenos Aires, La Plata and Ayacucho, Argentina; in 2010 they set foot in Asia, venturing to Turkey.

In June of 2004, Maestra Krebill instituted Helena Choral Week in her new home in Montana, inviting
singers from the Helena Symphony Chorale, Musikanten and other ensembles to come together in Helena
for an intensive week of rehearsals, concerts, classes and private lessons. Building on the success of this
project, Musikanten Montana was established as a new choral chamber ensemble in Helena in September of 2004. We are delighted to be celebrating our 13th season of performing in Montana.

The new group's first season included liturgies at St. Peter's Episcopal Cathedral, St. John's Lutheran
Church and the Cathedral of St. Helena, culminating in two performances, in Helena and Missoula, of
Monteverdi's masterpiece, the Vespers of 1610, as part of the Montana Early Music Festival, which the
ensemble sponsored. Musikanten Montana has continued to gather world-class early music singers and
instrumentalists for concerts of J.S. Bach’s glorious B minor Mass and St. John Passion, Handel’s rousing Israel in Egypt, and other major works by Bach, Handel, Schütz, Buxtehude, Scarlatti, Valls, Cavalli, and other Baroque and Renaissance superstars. Most recently, the MEMF spotlight concerts have been recreations of spectacular historic Venetian liturgies in San Marco, with music of the Gabrielis and Cavalli, and the return in 2014 of the iconic Monteverdi Vespers of 1610. In 2015, we presented a reconstruction of an early 1700 Easter Mass at Barcelona Cathedral. Musikanten Montana received three consecutive grants from the Montana Cultural Trust toward the production of this festival, unique in our state.

The 2016 MEMF production of Bach's Hohemesse was the first Historically Informed Performance of a major choral/orchestral work in the state of Montana, and Musikanten took that performance to 4 cities, performing to large and enthusiastic audiences in Bozeman, Butte, Missoula and Helena, with period instrument players from the Juilliard School, Indiana University, Minneapolis, Seattle, Denver, Chattanooga, the Bay area and Washington DC.  Building on that momentum, MEMF 2017 presented Bach's dramatic Johannespassion, with Denver tenor Daniel Hutchings as the Evangelist, a chorus of 38 and 13 solo players, including oboe da caccia, viola da gamba, organ and harpsichord. The 2018 and 2019 Montana Early Music Festivals, presented in Christmastide, comprised the 2 halves of Bach's Weinachtsoratorium, opening with an Advent cantata the first year, and an Epiphany cantata along with Cantatas 4, 5, and 6 in 2019.  MEMF 2020 was a Vivaldi fest, with 2 grand double choir/double orchestra works, the beloved Gloria, and "Winter" from The Four Seasons..

Besides the spring Montana Early Music Festival and Helena Choral Week in June, Musikanten Montana continues to sing an annual concert for All Souls, the Advent Lessons and Carols, and for many years, Christmas Eve Prelude and Mass at St. Peter's Cathedral. The ensemble has been in residence at the Cathedral of St. Helena since 2017, singing additional special liturgies including the Mass of the Holy Spirit, with the Carroll College Choirs, and a choral Stations of the Cross during Lent.  The ensemble also searches out collaborative appearances in the Helena community – in November 2007, the group participated in “Raise the Roof!” — an event celebrating Harper Lee's classic To Kill a Mockingbird, which featured two local actors, the Helena Middle School Voices of Tomorrow and a gospel choir from Great Falls. In August 2009, the ensemble was honored to perform music for “Catch and Release,” featuring 4 fly-fisherman on the Boulder River choreographed by Ann Carlson under an American Masterpieces Dance grant from the National
Endowment for the Arts. Musikanten Montana has also performed with Artisan Dance and Charlene
White’s Premiere Dance Company, as well as at local events such as the Original Governor’s Mansion tour, East Helena’s Holiday Stroll, Downtown Helena’s Art Walks, and the Algerian Shrine’s Easter Tableaux.

Singers from Musikanten Montana continue to travel to Washington, DC, and further to perform with
their Washington, DC, friends. In March of 2010, Musikanten Montana invited Argentina conductor Andrés
Bugallo to Montana for the Early Music Festival, continuing on to Washington to conduct the combined
Musikanten forces in Schütz' Musikalische Exequien and Scarlatti's Stabat Mater. In September 2018, many
Montana singers participated in Musikanten’s tour to Berlin and the Hanseatic city of Gdansk (Poland), singing a repertoire of all American music, including Copland's mezzosoprano tour de force "In the Beginning," and works by Irving Fine, Elliott Carter, Charles Ives and Washington composers Russell Woollen and Robert Evett.