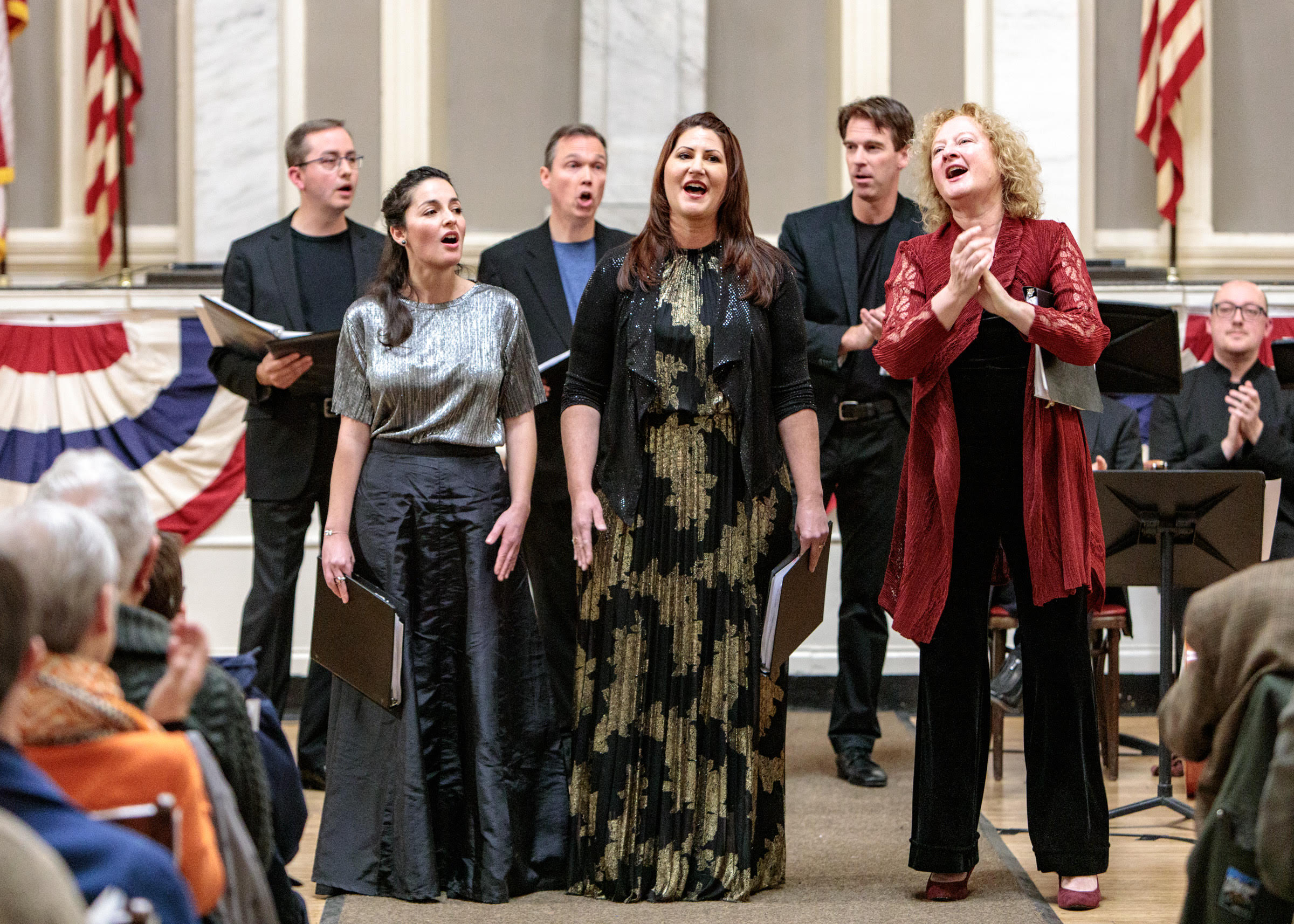 Tickets are now on sale for our 2021-22 season! Please visit www.bostoncamerata.org for more information.

The Boston Camerata occupies a unique place in the densely populated universe of European and American early music ensembles. Camerata's distinguished rank stems partly from its longevity: founded in 1954, when the field of endeavor was in its infancy, as an adjunct to the Boston Museum of Fine Arts' musical instruments collection, Camerata is now one of the longest-lived groups to be functioning, and vigorously so, up to the present day.

But length of service, by itself is not sufficient to account for Camerata's preeminence, nor are its numerous distinctions including the American Critics' Circle Award, grants from the National Endowment for the Arts, residencies at the Massachusetts Institute of Technology and the University of Tennessee, and the Grand Prix du Disque. The Boston Camerata has achieved its eminence in large part because of its willingness to approach, with consistent success, many kinds of historical repertoires from many centuries, from the early Middle Ages to the nineteenth century, and from many places and cultures, stretching from the Middle East to early New England, with numerous intermediate stops in Renaissance and Baroque Europe and Latin America. Directed from 1969 to 2009 by Joel Cohen, and from 2009 to the present day by Anne Azéma, the Boston Camerata has continued to create, over more than a half-century of activity, a very large number of concert and recorded productions. These typically combine scholarship, much of it original, with high performance standards maintained by a distinguished roster of outstanding vocal soloists and instrumentalists. Camerata's productions regularly combine dramatic flair with a certain humane, overarching perspective on the role music has played in (wo)mankind's search for meaning and fulfillment. Camerata's signature approach, as embodied in its touring, pedagogy, and media projects, has won the ensemble many listeners and followers on five continents as the ensemble presents new projects all the while maintaining in active repertoire many of its historic achievements.

Camerata's diary in recent seasons has reflected intense activity. Borrowed Light, a music and dance production in collaboration with the Tero Saarinen Company of Helsinki, Finland, toured extensively, with over eighty performances from 2004 to 2015 in the United States (Brooklyn Academy, Jacob's Pillow Festival), Europe, (France, Germany, Italy, Belgium, Scandinavia, Netherlands) the United Kingdom, and Australasia (Australia and New Zealand). The film of this production has been seen over twenty times on European cable television in 2018, 2019, and 2020. The ensemble has appeared in concert at the Théatre de la Ville, Paris (2015), the Alcântara Festival in Brasil (2016), The Metropolitan Museum The Cloisters (2017), Rockefeller Chapel Chicago (2018), La Philharmonie de Paris (2018). Anne Azéma's innovative staged productions include The Night's Tale, narrating a medieval tournament in France, was first presented in France and Luxembourg (2007), then performed in Boston to great acclaim (2016), with further touring in 2017 and 2018 (Switzerland, Holland, France), and in the US in 2020. Azéma's reimagining of the Play of Daniel (premièred in 2014) is by now an integral part of the Camerata's public face to the world. Further tours of Daniel took place in North America (Canada and the US Midwest) in late 2014, continuing in 2017, 2018, 2020. Collaborations with local choirs (both children and adults) and with young professionals-in-training in both Europe and the United States continue to be a distinctive feature of the company (2016-2020 touring seasons).

Two new media projects were released in 2019: Treasures of Devotion: European Spiritual Song ca 1500 (Music & Arts -Naxos); and Free America! Early Songs of Revolt and Rebellion, which renews a collaboration of the ensemble with Harmonia Mundi. In late 2020, Camerata’s trailblazing, made-for-streaming production of Henry Purcell’s Dido and Aeneas earned international acclaim as it was viewed by music lovers on five continents. Our next Harmonia Mundi project, A Medieval Christmas – Hodie Christus Natus Est, will be issued in October 2021.

French-born vocalist, scholar and stage director Anne Azéma has directed The Boston Camerata since 2008 and the French ensemble Aziman, which she founded, since 2005. Intensely engaged since her student days with the song repertoire of the Middle Ages, she is esteemed as a charismatic solo performer. But she is also widely admired for her creative skill in building and directing complete musical productions of varied styles and periods, both for her recital programs and for larger ensemble forces (concert and stage) in Europe and the United States.

Anne Azéma's current discography of 40 recordings as a soloist (Grand Prix du Disque; Edison Prize) includes five widely acclaimed solo CD recitals. Since assuming the directorship of The Boston Camerata in 2008, she has created a series of sixteen new productions, acclaimed by press and public alike. Ms. Azéma is also in demand as a recitalist, presenting her original programs to audiences in North and South America, Europe, the Middle East and Asia, with either Shira Kammen (vielle and harp), or Nigel North (lutes). Her collaboration with the Tero Saarinen Dance Company (Helsinki, Finland) around early American songs has been praised on three continents. Her 2007 music theater creation The Night's Tale – Le Tournoi de Chauvency, based on a 14th century French narrative, is in continued demand, and was slated to tour in the US in 2020. 2017 marked the creation of a commissioned program in coordination with an international exhibit project of late Medieval artifacts (Art Gallery Ontario, Toronto, The Metropolitan Museum, New York and the Rijksmuseum, Amsterdam) with a CD issued in 2019 (NAXOS) to critical acclaim. In November 2014, she edited, directed and staged The Play of Daniel to critical and public acclaim; the production was successfully reprised in 2017, 2018 and in early 2020.

Among Anne Azéma's teaching activities are master classes, seminars, and residencies at conservatories and universities here and abroad. She has contributed articles to scholarly and general audience publications. In 2011, Ms. Azéma was named Chevalier des Arts et des Lettres by the French Government. Ms. Azéma was the Robert M. Trotter Distinguished Visiting Professor at the University of Oregon Eugene in 2012 and again in 2020. She has been invited to lecture at New York University, Harvard University, the Massachusetts Institute of Technology, Brandeis and Boston University, and is currently a faculty member at the Longy School of Music of Bard College. In 2017, she was presented with the Distinguished Artist Award of the Saint Botolph Foundation, Boston. Her second film appearance received two prizes at the Montréal FIFA (2014). She has taught at the Fondazione Cini, Venice (2015); the Fondazione Benetton, Treviso (2016); the Schola Cantorum, Basel (2015). Anne Azéma's new collaboration with the label Harmonia Mundi grew from two programs of early American music commissioned in 2018 by the Philarmonie de Paris. Anne Azéma is currently hard at work on early music theater projects for the ensemble and a 'medieval' video game.