Piffaro founders to take final bow in May 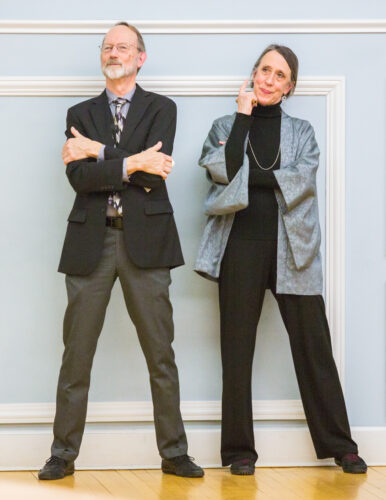 Philadelphia’s internationally renowned period instrument ensemble, Piffaro the Renaissance Band, brings its Founders’ Finale season to a rousing conclusion with a concert that focuses on musical legacies. In addition to celebrating Joan Kimball and Bob Wiemken, the group’s retiring artistic co-directors, the program recreates The Musical World and Legacy of Charles V with guests lutenist Daniel Swenberg and wind players Héloïse Degrugillier and Fiona Last. Concerts take place in Philadelphia and Wilmington May 13-15, and May 21-31 online. Tickets and further information are available at bit.ly/PiffaTix or by calling 215-235-8469.

“We are excited about this final program in our long tenure as the artistic directors of Piffaro the Renaissance Band,” says Joan Kimball. “This concert represents a bit of our own legacy as well as that of the music-loving Emperor Charles V, because we will be performing a number of our favorites from years past, alongside newly chosen works. We will savor this last opportunity to perform with this band of incredible musicians and people. It is not without some regret that we hand over the reins, but we are delighted that Piffaro will continue under the capable leadership of Priscilla Herreid, who will start her tenure as artistic director this summer.”

Few monarchs of the Renaissance can rival the achievements — or the titles — of Charles V, Holy Roman Emperor, King of Spain, Lord of the Netherlands, Duke of Burgundy, Head of the House of Hapsburg. “His political reach extended across the whole of Europe,” explains Bob Wiemken, Piffaro’s co-artistic director, “and his impact on music throughout his life and reign was equally significant.” Determined to make an impact on all who saw and heard him, Charles traveled with a sumptuous retinue that included a band of musicians led by the most notable composers of the day. His political expansion into the so-called “New World” facilitated the interaction of European styles with the indigenous sounds of the Americas.