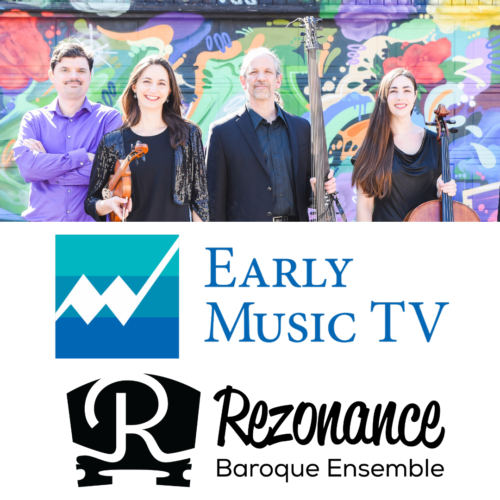 Toronto, ON – March 16, 2022 – Rezonance Baroque Ensemble to join Early Music TV with the rebroadcast of “Un Viaggio Fantastico” (A Fantastic Journey).
“Rezonance is thrilled to be one of the earliest partners on this new and visionary platform” said Rezan Onen-Lapointe and David Podgorski, founding members, Rezonanance Baroque Ensemble. “We have always been passionate about bringing music to audiences in fresh ways. We look forward to continuing to find ways to connect our audience with great art through Early Music TV!”
“Early Music TV represents an opportunity reach a broader audience within the historically-informed performance community,” said Michelle Knight, Managing Director, The Toronto Consort. “Since we launched Early Music TV in November 2020, our audience has increased 250% and our geographic reach has expanded outside of Toronto to a global audience. We are thrilled that Rezonance Baroque Ensemble has joined Early Music TV and we look forward to the expansion of their audience and reach as well as the revenue sharing opportunity to support their artists.”
Un Viaggio Fantastico (A Fantastic Journey)
Recorded at Heliconian Hall, Toronto, July 2021, core members Rezan Onen-Lapointe (violin) and David Podgorski (harpsichord) lead you on a musical journey through Italy with two familiar collaborators – in-demand freelancer Erika Nielsen on Baroque cello and dynamic multi-instrumentalist Benjamin Stein on theorbo and lute. Together, they take you across terrain that includes some of the earliest works composed for solo Baroque violin to the chamber works of the later high Baroque via period composers from all over the country – from Venice (Dario Castello; Antonio Vivaldi), to Modena (Bellerofonte Castaldi); and Florence (Francesco Maria Veracini) to Milan (Giovanni Paolo Cima).
ABOUT EARLY MUSIC TV
Founded by The Toronto Consort and launched in November 2020, Early Music TV (earlymusic.tv) is an on-demand streaming platform dedicated to music of the Middle Ages, Renaissance and Baroque. With a world-class catalogue of Early Music masterpieces, and free educational content, Early Music TV has been designed for a worldwide digital audience of musicians and music-lovers.
ABOUT REZONANCE BAROQUE ENSEMBLE
Rezonance is a young, vibrant Toronto-based classical music ensemble with a mission to present compelling performances of Baroque works in ways that feel relevant to today’s audiences. Inspired by history yet informed by the present, Rezonance looks to help audiences both discover under-appreciated and unusual works, as well as experience the best-known classics in new contexts.
Rezonance treads where few classical groups have had the courage, whether performing improvisations and multi-media collaborations with other types of artists (including actors and visual artists), presenting performances in unconventional locations, or collaborating with like-minded musical groups in innovative ways. Rezonance is one of the few Classical ensembles that dares to add spontaneous improvisatory elements to live performances, capturing the true spirit of Baroque music, and a fresh and exciting concert experience.
In 2019, Rezonance was invited to the Early Music America Emerging Artists Showcase at the Bloomington Early Music Festival in Indiana, where they performed their acclaimed programme “Handel’s Heroines” with soprano Vania Chan. This prestigious performance was webcast live around the world, helping Rezonance gain recognition in the wider early music community.
Together, founding members Rezan Onen-Lapointe (violin) and David Podgorski (harpsichord) bring a veritable wealth and breadth of experience from their training and performances in Europe, their study of early music McGill University and at the Royal Conservatoire of the Hague, Netherlands, and, as trained educators, connecting with audiences directly through interactive pre-concert chats and Ask Me Anything-style sessions post-concert.
As lifelong students of their art, in 2019 Rezan and David returned to the Netherlands on a Canada Council grant to study historical acting techniques with Jed Wentz and the Dutch Historical Acting Collective, and learn about how to apply these rhetorical ideas to historical music performance, thereby enriching their interpretations for future audiences.
Rezonance holds the belief that the music of the past can be just as moving and exciting now as the day in which it was written, and is known for introducing audiences and young musicians to this idea through intimate concerts with an informal atmosphere, and outstanding musical performance.