This academic year I had the honor of being named a Fulbright Scholar to complete archival research in Paris, France. I have been welcomed by the Centre de Musique Baroque de Versailles (CMBV (hyperlink to: http://www.cmbv.fr) as a chercheurassociéand have enjoyed meeting French musicologists and learning about the differences between working as an academic in the United States and in France. My dissertation examines seventeenth-century French street music, particularly music associated with the Pont Neuf (a seventeenth-century bridge in Paris that became an important public space and information conduit), and it investigates the symbiotic relationship between street culture and theatrical spectacle that emerged during the reign of Louis XIV. The Opéra-Comique popularized the use of vaudevilles, popular melodies used as vehicles for new text settings, as building blocks to construct spectacle in the eighteenth century, but little attention has been paid to the seventeenth-century origins of this practice. Further, although it is commonly alleged that the cultural practice of singing vaudevilles emerged from the streets and on the Pont Neuf in Paris, today we possess a murky understanding of this rich musical tradition. My research bridges the knowledge gap between what we know of the musical practices from the streets and the performances in the Parisian theaters that first began to appropriate vaudevilles to create spectacles. 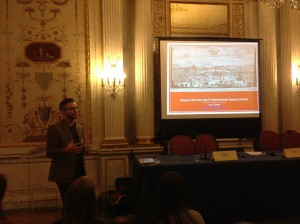 I have spent the majority of my time in France conducting archival research at various branches of the BibliothèqueNationale de France and in archives such as the museum and archives of the Comédie-Française and the Archives Nationales. In the spring I hope to also work in several libraries in the south of France and in London. Since September I have spent many hours studying several hundred volumes of manuscript channsonniers, or collections of song texts set to vaudevilles; these sources have fundamentally altered the ways I approach music from this period. In addition to working in libraries and archives I had several opportunities to present the fruits of my research. I recently presented my dissertation project at the CMBV and in April I will present a paper at the annual Oxford Dance Symposium. As a specialist in historical performance practice I presented a segment of my research on street cultures and communication networks in the form of a vaudeville sing-a-long at the mid-year meeting of the Franco-Fulbright commission (attached photo). Together we reenacted how vaudevilles were used on the Pont Neuf while I lead the singing and provided accompaniment on a copy of a seventeenth-century hurdy-gurdy. Perhaps most importantly, the opportunity to see firsthand how French scholars construct history, conceive of academic projects, and work with sources has proven deeply influential on my own thinking. I have created strong bonds through the networks of the Fulbright and the CMBV here in France, and I hope to nurture these connections in the future in order to encourage more French-American exchanges of both musical practices and intellectual thought.

John Romey is a Ph.D. candidate in historical musicology with an emphasis in historical performance practice at Case Western Reserve University in Cleveland, Ohio. During the 2014-2015 academic year he was named a Fulbright Scholar for Paris, France and worked as a chercheurassocié with the Centre de Musique Baroque de Versailles. He is completing a dissertation entitled “From the Street to the Stage: Popular Song and the Construction of Parisian Spectacle, 1648-1713,”which examines the adoption of seventeenth-century street culture in the creation of theatrical spectacle in the reign of Louis XIV. He has presented his research at academic conferences in the United States, France, and the United Kingdom. Mr. Romey also performs regularly on viola da gambas of all sizes and has published two articles on performance practice.
The Fulbright Program awarded 20 grants to researchers and students this year of the 148 proposals received.