Toronto Bach Festival Celebrates its Fifth Season of the Best in Baroque, May 29-31, 2020 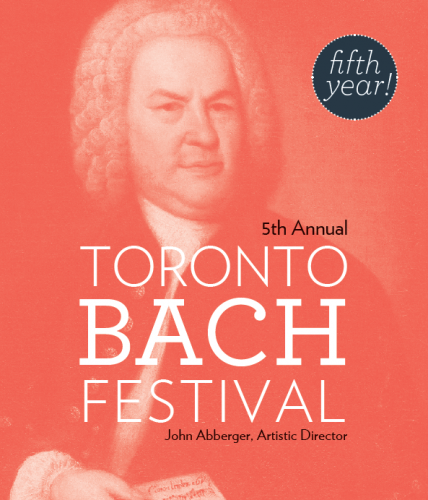 300th Anniversary of the Bach Sonatas and Partitas for Solo Violin

Air on the G String, Oboe Concerto and Cantatas

“Without doubt, the Toronto Bach Festival is an artistic entity that ought to have many more seasons ahead.” – James Wegg Review

“A very enjoyable and worthwhile concert of relatively unknown Bach quite excellently presented in an appropriate setting” – John Gilks, Operaramblings

“From the intimacy of works for solo violin to one of Bach’s grandest works, the great Mass in B Minor, the fifth annual Toronto Bach Festival proves in its most splendid way yet why the music of Johann Sebastian Bach remains so universally accessible and engaging.”  That is the summation of the 2020 event by the Festival founder and artistic director, oboist John Abberger.

Between May 29 and 31, the Toronto Bach Festival (www.TorontoBachFestival.org) presents historically informed performances of these works and of rare cantatas, concertos and masterful organ works, along with insightful commentary, in three Toronto locations.

The following day, Sunday, May 31, 1 p.m. at Eastminster United Church, 310 Danforth Avenue (near Chester), Butt will deliver the Festival’s annual free lecture, this year an exploration of Bach’s great Mass in B Minor – a work he will conduct at 4 p.m. as the Festival finale.

MASS IN B MINOR

“The B Minor Mass reaches inside you and grabs you.  Its music is unbelievably gorgeous!” says John Abberger.  Bach wrote the first two parts (Kyrie and Gloria) of his iconic work at the midpoint of his career, and completed the work in 1749, the year before his passing. Although a Lutheran, he took the best of his sacred works from over the years and adapted them to the Latin text, adding two new parts found in the Catholic mass.

While not written for a specific purpose, the Mass will be presented the way Bach intended – but is believed not to have lived to hear.  Five carefully chosen vocal soloists with no vibrato, mirrored by a chorus of equal size, are joined by an orchestra that includes natural horn and trumpets, and baroque strings, flutes, oboes and bassoons– “an unusually intimate ensemble that will provide amazing clarity,” promises Abberger.

This year also marks the 300th anniversary of the publication of Bach’s beloved Sonatas and Partitas for Solo Violin – works Abberger describes as “unusually passionate for the period, technically challenging, and almost orchestral in their rich palette of musical colours.” The Toronto Bach Festival celebrates with a two-part performance of all six works by three of Toronto’s foremost period violinists, all members of Tafelmusik – Festival regular Julia Wedman, Tafelmusik Music Director Elisa Citterio in her first TBF appearance, and Patricia Ahern.  Their musical journey includes the Partita No. 2 in D Minor, with its famous Chaconne. The concerts take place Saturday, May 30, 5:30 and 9 p.m. at Eastminster United Church, preceded at 4:30 p.m. by noted music broadcaster and writer Rick Phillips in a pre-concert chat.

The Festival opens Friday. May 29, 8 p.m. at St. Barnabas on-the-Danforth, 361 Danforth Ave. (near Chester) with Air on the G String. John Abberger is both conductor and oboe soloist in a program featuring two early cantatas (Alles, was von Gott geboren, BWV 80a; and Wachet! betet!, BWV 70), the Oboe Concerto in G minor, and the Orchestral Suite No. 3 in D with its famous theme known as the Air on the G String.  In the spirit of Bach, who created new works by recycling his earlier music for other instruments, Abberger performs his own arrangement for oboe of the F minor piano concerto.  Rick Phillips will preface the concert with his commentary at 7 p.m.

The Toronto Bach Festival has engaged some of the finest Baroque interpreters as vocal soloists in 2020.  Festival regulars alto Daniel Taylor, and bass Joel Allison (recently seen as Fiorello in The Canadian Opera Company’s production of The Barber of Seville) are back, joined by sopranos Hélène Brunet (lauded in her 2019 debut) and Ellen McAteer, alto Nicholas Burns and tenor Charles Daniels.

In addition to the above singers, organist John Butt, oboist John Abberger and the three violin soloists, the Festival features the Toronto Bach Festival Singers and Orchestra, which comprise leading performers from Toronto’s Baroque music scene

The 2020 Toronto Bach Festival is presented in partnership with The New Classical FM,  The WholeNote, and Chamber Factory.

Passes will be available for pick-up at the Festival box office at the first concert. Ticket confirmation will be sent by email, and a list of ticket orders will be kept at the door for each concert.

The Toronto Bach Festival was founded in 2016 by internationally recognized Bach authority John Abberger, to perform the music of J.S. Bach through historically informed performances that engage the wide diversity of Toronto audiences.  As success builds, the Festival has grown significantly since its inception, both in regards to audience size and donations to the Festival.

Abberger describes Bach as “the consummate artist, who channeled the human spirit into music. His musical language culminated in his extraordinary skill in musical text setting, and his use of complex harmony for musical expression. Tastes had changed by the end of Bach’s life, but centuries later, his music is still deeply moving.”

One of North America’s leading performers on historical oboes, John Abberger (www.TorontoBachFestival.org/johnabberger) has been principal oboist with Toronto’s Tafelmusik since 1989. He has performed extensively in North America, Europe and the Far East with the company,  and appears regularly with other prominent period-instrument ensembles across North America.  His critically acclaimed recordings on Analekta include his reconstruction of Bach’s oboe concertos and orchestral suites, and Gramophone Magazine called his recording of Alessandro Marcello’s Concerto for Oboe “one of the best there is”.

A native of Orlando FL, he trained at the Juilliard School and Louisiana State University, and holds a Performers Certificate in Early Music from New York University.  He has taught at the City College of New York, and serves on the faculty at the University of Toronto and the Royal Conservatory’s Glenn Gould School.

The complete Festival lineup is below.

Concerto for oboe in G minor, after BWV 1056

Opening night of the Toronto Bach Festival brings together four powerhouse baroque vocalists and orchestra in a fifth anniversary celebration of Bach’s orchestral and choral works. The program features one of Bach’s most immediately recognizable orchestral pieces, Air on the G String, alongside lively and resonant works that draw on the vast power of creation and the drama of earthly existence.

Prelude and Fugue in B minor, BWV 544

Award-winning English keyboardist John Butt takes control of the St. Andrew’s 1983 Karl Wilhelm organ. Mr. Butt is an authority on the music of J.S. Bach and its performance, and his collaboration with our musicians will be an unforgettable highlight of this year’s Festival. Author of several books on music of the Baroque era, Mr. Butt is the Gardiner Chair of Music at the University of Glasgow. He is coming to Canada exclusively for this appearance with the Toronto Bach Festival.

Three of Toronto’s best period violinists take on Bach’s edifying but challenging Sonatas and Partitas for solo violin, on the 300th anniversary of their publication. Tafelmusik Music Director Elisa Citterio, Festival regular Julia Wedman and fellow Tafelmusik violinist Patricia Ahern take us on a musical journey from darkness to brilliant luminescence. Presented in two parts on a single ticket.

Sunday, May 31 at 1 p.m. at Eastminster United Church, 310 Danforth Avenue

Prominent scholar and musician John Butt explores what many consider to be Bach’s crowning achievement, from its inception, through the historical context, and on to the enduring admiration of musicians and audiences over the last 270 years.

Sunday, May 31 at 4 p.m. at Eastminster United Church, 310 Danforth Avenue

Mass in B Minor

A monumental achievement in classical music, this sacred work of immense proportion and profound emotion is one of J.S. Bach’s final compositions, and ranks among his greatest. Directed by renowned conductor and Bach scholar John Butt, this iconic work is presented as it was in the composer’s time with an intimate ensemble, to offer a performance of the utmost clarity and brilliance.

The most ambitious project presented by the Toronto Bach Festival to date, the Mass in B Minor is a powerfully transcendent celebration of the human spirit.