Here’s what they taught us in Music History class: Johann Sebastian Bach died in 1750 and his music was forgotten until Felix Mendelssohn conducted the St. Matthew Passion in Berlin in 1829. Sure, there was the van Swieten library, but other than that? The world of music scholarship has only recently discovered the role a group of Jewish salonnières in late 18th-century Berlin in preserving the music of the great Baroque master. Rebecca Cypess and Nancy Sinkoff’s monograph, a collection of fascinating essays based on a conference they had produced at Rutgers University, provides a significant resource for reassessing the historical record. 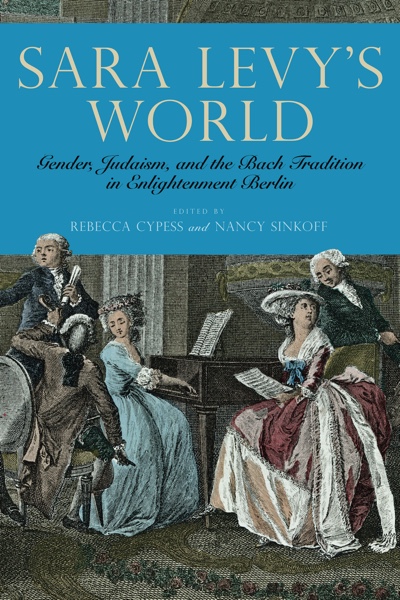 The main focus of this volume is on Sara Itzig (1761-1854). There was reportedly a “Bach cult” at the home of her father, Daniel Itzig (1723-1799), the king’s banker and “court Jew,” who had hired Johann Philipp Kirnberger, a student of J. S. Bach, to give keyboard lessons to his daughters. One, Fanny, married the Viennese banker Baron Nathan Adam von Arnstein and established a salon at their home in Vienna. Another, Bella, married Levin Jacob Salomon, and their daughter Lea married Abraham Mendelssohn, son of the famous philosopher Moses Mendelssohn. Lea and Abraham begat Felix and Fanny.

Sara, who studied with Wilhelm Friedemann Bach and earned a reputation as a virtuoso performer on both fortepiano and harpsichord, established a popular salon in her magnificent home in Berlin with her husband, Solomon Levy. It became a gathering place for a cross-section of Berlin’s intelligentsia — a rare meeting ground of nobility and upper bourgeoisie, Christians and Jews, men and women, poets and bankers and musicians — who came together to engage in witty conversations and to listen to readings and musical performances.

Sara also employed a professional copyist and accumulated a sizable music library that included many instrumental works of J. S. Bach and his sons. At the end of her long life, she donated her music collection to the library of the Berlin Sing-Akademie, an amateur musical institution, with which she had occasionally performed as a keyboard soloist. In 1805, her nephew, Abraham Mendelssohn, had purchased most of the estate of J. S. Bach, including more than 100 original autograph scores, and a few years later donated it to the Sing-Akademie, under the stewardship of his friend, Carl Friedrich Zelter.

In 1819, Abraham Mendelssohn’s 10-year-old son Felix joined the Sing-Akademie and became a student of Zelter’s. Intrigued by excerpts of Bach’s music that Zelter had been parceling out, Felix wanted to see the real thing. Enter Sara’s sister Bella Itzig Salomon, who gave her grandson Felix a gift that would have far-reaching consequences, a manuscript copy of Bach’s St. Matthew Passion. That gift eventually led to Felix’s conducting, on March 11, 1829, the first performance since 1742 of Bach’s Passion. In her chapter, Yael Sela points out that the concert also became a significant event in the formation of a rising German-Protestant nationalism.

Part III of the volume offers a metaphorical look at the chamber music that was performed in Sara Levy’s salon. Cypess notes that many of the duets were of a style in which “both of the featured voices are primary voices, and neither dominates the other.” Cypess posits that these duets mirrored not only the salon model of human voices in polite conversation, but also inter-religious socialization within an enlightened society, an attractive concept for the doubly marginalized: Jewish women.

In Chapter Eight, Steven Zohn describes the style of some quartets in Levy’s collection as a reflection of the witty and egalitarian social dialogue of salon culture, involving the temporary suspension of differences of social status, gender, and religion. He discusses the interaction of the instruments in C. P. E. Bach’s Quartet in D major, W. 94, with equal wit, writing about the “keyboard’s newfound assertiveness… shocking the other instruments into the submissive role of accompanying.”

But the zinger comes in Christoph Wolff’s chapter. The Bach collections at the Berlin Sing-Akademie remained uncatalogued for years, all references to the Jewish salons and the work of the Mendelssohns were suppressed during the Nazi era, and the Red Army confiscated the priceless collection after World War II. It was finally repatriated from Kiev to Berlin in 1999, allowing scholars during the past two decades to better understand the role of the Berlin salonnières in appreciating and preserving the music of J. S. Bach and his sons. Cypess and Sinkoff’s volume, approaching their topic from multiple perspectives, provides a long-overdue corrective to a historic misunderstanding.

Joshua Jacobson, Northeastern University Professor of Music emeritus, is the founder and director of the Zamir Chorale of Boston, author of several books, dozens of articles, and more than 100 choral arrangements and editions.