This book should interest every serious student of Bach. Michael Maul, one of the most systematic and productive of the middle generation of living Bach scholars, has produced a volume that fills in many gaps but also offers fascinating new information about St. Thomas School in Leipzig over the centuries. The German edition of the book appeared in 2012, but now English readers have the benefit of Richard Howe’s fluent translation. 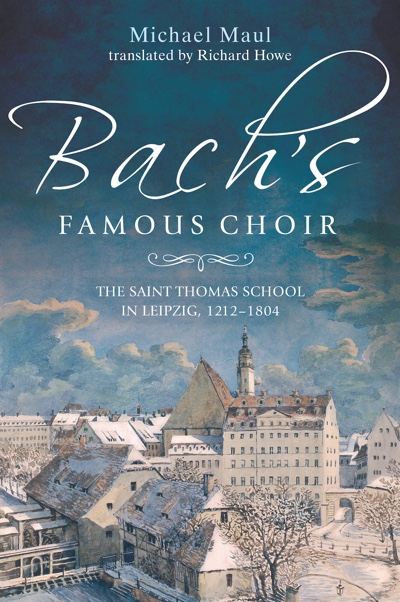 The universal interest in St. Thomas School and its famous choir derives, of course, from the fact that Bach was in charge of it from 1723 to 1750, yet Maul’s treatment of the school from the 13th century to the early 19th century in fact makes clear that the most glorious days of the choir (as opposed to its repertory) were not under Bach.

Armed with complete command of the secondary literature and insights from his own fresh archival researches, Maul weaves throughout his story certain threads that explain the vicissitudes experienced by the school and choir over the centuries: the relationship to the town government; the support of the townspeople; the tensions or amity between the school’s head, the Rector, and the third-ranked Cantor; arguments about whether St. Thomas’ should be primarily a training institution for young singers or an academic school; and the role the choir played in the city’s life.

There is some generally unknown information that will startle those who do not follow Bach scholarship closely. Maul stresses that there was a long tradition of cantors annually distributing the 32 best choristers among four ranked Cantoreys of eight voices (two on a part); the first Cantorey, therefore, consisted of the best of the best, and to be a member offered exceptional opportunities for making money: it was the first Cantorey that sang at weddings, funerals, and other special occasions. The first Cantorey was also the core of Choir I for the Sunday morning music; thus, eight good voices were available if all were present, although when needed the cantor could also employ other Thomaner, who, by law, had to be present at one of the churches where they provided music. Matters got complicated during the cantorates of Johann Kuhnau (1701-22) and Bach, when fewer good singers were available and some of them were needed as instrumentalists. (When this reviewer asked Maul a few years ago how many singers he felt Bach used, he replied, cautiously, “eight, more or less,” which leaves open the possibility for any number, depending on the circumstances of the moment.)

A second striking, even shocking, fact revealed by Maul is that the Town Council had rewritten and approved — but not yet officially published — a new set of rules for St. Thomas School just before Bach’s appointment. And so, when he signed his contract, agreeing to follow present and future regulations established by the council, he did not know that the council had already determined that musical ability was no longer — as it had been in the 17th century — a prerequisite for admission to the school. Moreover, the council had changed the distribution of certain income sources for the benefit of the school’s junior faculty at the expense of the senior faculty, including the Cantor. Thus, Bach had the rug pulled out from him at the very start of his cantorate. And, of course, from then on things only got worse.

Finally, Maul incorporates his recently published findings concerning the Bach-Scheibe dispute (1738) into the volume, pointing out that even though Johann Adolf Scheibe (a student of Bach) had described Bach’s music as “unnatural” and “turgid,” there were another nine musicians targeted, sometimes with even rougher criticism. Maul finds that in all cases Scheibe had an axe to grind; with Bach, it undoubtedly concerned Bach’s rejection of Scheibe as the organist of St. Nicholas Church because of his inability to improvise a fugue at the audition.

Just as enlightening is Maul’s treatment of the pre-Bach and post-Bach eras. We learn that the really glorious time of the choir was in the 17th century, beginning with the cantorate of the learned Seth Calvisius (1594-1615), who inspired a surge of endowments to support the school and its music program; with rising standards and musical talent made a prerequisite for admission, those admitted to the boarding school (Alumnen) came increasingly from outside of Leipzig, a situation that in the future would create political (and hence financial) difficulties. Musical excellence continued under cantor Johann Hermann Schein (1616-30), despite a city financial crisis and even the Thirty Years War (1618-48); in fact, in 1634, during the cantorate of Tobias Michael (1632-57), regulations for St. Thomas School were published that officially established musical talent as the sine qua non for admission, which fact no doubt inspired Heinrich Schütz, the Court Capellmeister in Dresden, to dedicate his Geistliche Chormusik (1648) to the Leipzig Town Council and their “famous choir.”

After 1750, there were also some high points. Mozart compared the Thomaner under Cantor Johann Friedrich Doles (1756-89) favorably with the choral situation in Vienna, Berlin, and Prague. Moreover, in Johann Adam Hiller’s cantorate (1789-1801), with which Maul’s account stops, the orchestra was permanently augmented with professionals from the Gewandhaus Orchestra; these also taught at the school, which was now a “true musical conservatory” (J. F. Rochlitz), where weekly public concerts of choral and symphonic music were offered.

The book’s only flaw is the lack of a comprehensive index (there is an index of names), but there are many plates and several appendices that include thumbnail sketches of cantors, rectors, and overseers, as well as a chronology of the school and information about money and finances.

Raymond Erickson, music historian and keyboardist, is Professor Emeritus of Music at Queens College and The Graduate Center, CUNY. He continues teaching and performing in retirement.