It may seem strange that a nearly 400-page volume could be devoted to two fragmentary and torn membranes of parchment. But when they were brought to the attention of Margaret Bent in 2017, she enlisted the help of Jared Hartt and Peter Lefferts to write a book in light of the profound importance of these two humble artifacts of music history. 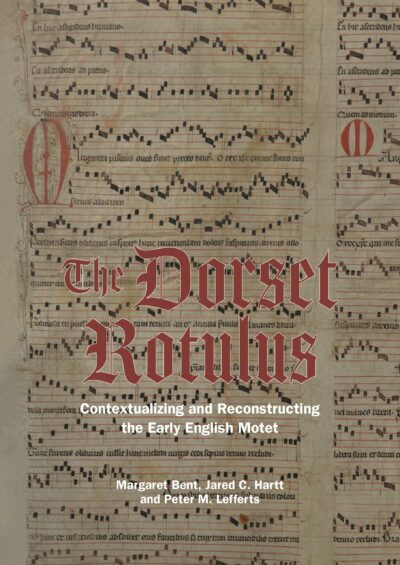 The Dorset Rotulus: Contextualizing and Reconstructing the Early English Motet manages to dwell so long on its topic, not unprofitably, for two important reasons. First, the parchment implies much beyond itself. Thanks to the careful codicological analysis of Bent, it’s clear that “Dor a and b,” the two membranes, were part of a rotulus (a scroll of music, as opposed to a codex), perhaps used by the Benedictine abbey of St. Peter at Abbotsbury. The rotulus format was unusual for music during the late 13th and early 14th centuries. But Dorset was not just any rotulus: calculating for the damage and trimming which has occurred to the membranes, Bent was able to estimate a width of around 317 mm (i.e., 12.48 inches), which “exceeds that for any rotulus or codex of polyphonic music in this period.” The authors suspect that the rotolus contained a fair amount of music and even speculate as to what kinds and what specific pieces might have been contained therein. The rotulus fleshes out what is always a fragmentary picture for musicologists who study Medieval English music, since “there are no complete or nearly complete English manuscripts between the Winchester Troper of c. 1000 and the Old Hall manuscript” compiled at the beginning of the 15th century.

But the second reason for the book, and its importance, is what is written on the parchment. Contained on the two membranes are four English motets, probably from between 1280 and 1320, in the early stages of the genre’s development before the revolution of Philippe de Vitry and the ars nova. Three of the motets are already known but whose reading in the Dorset rotulus are unique.  This in itself is an exciting development, since motets in this period are often fragmentary and unperformable. Even better, the last motet, Naufragantes/Navigatrix, is new to the scholarly community—and to performers—as of this volume.

The authors took the opportunity not merely to analyze in detail the four motets, but to take stock of these decades and the role of England in the development of the motet in the period. They all richly make the case for two interventions in the existing picture of motets: first, the motet circa 1320 was stylistically diverse and capable of a wide expressive range. Although the book reveals some subtle disagreement between its authors on the degree to which the motet genre was “ossifying” during this period, all of them analyze the motets with particular care for the subtleties of the repertory. The motets of Dorset display a careful sensitivity to periodicity, to text setting, to cadencing, to voice leading and parallel intervals, and to the use of certain compositional techniques such as refrain and voice-exchange.

Second, the authors are keen to put England at the forefront of the discourse around the motet in this period. And not without good reason: Peter Lefferts, in tallying the numbers, notes that continental sources leave us something like 83 motets from the 1290s through the 1310s, whereas he calculates that a conservative estimate of English sources is 354. Granted, many of these English motets are fragmentary, but the point remains: the scholarly discourse is hardly weighted in the direction of the extant literature but has preferred, on the whole, to emphasize the role of the continent in motet’s development. The authors of The Dorset Rotulus use the new membranes as a fortuitous invitation to tip the balance a bit more in the direction of the sources.

The timeliness and value of the The Dorset Rotulus couldn’t be clearer for the scholarly community. And it is for the reason, no doubt, that it lives in the details of its subject and does not shy away from them. For the same reason, it may be a daunting book for anyone not intimately familiar (or passionate about quickly becoming familiar) with the early motet. Nevertheless, the authors make the book worth a purchase for anyone interested in early music by placing a heavy emphasis on providing performance-ready material wherever possible. Moreover, not only are the Dorset rotulus motets reconstructed, but there is also a reconstruction of a similar motet along the same lines, Rota versatilis. For anyone looking for new early English material available for performance, the book will be an excellent resource.

John Ahern is a PhD candidate at Princeton University studying the history of the fifteenth-century mass cycle through the music of Fremin le Caron. He lives in New Jersey with his wife and son.