Pianists unfamiliar with Mark Kroll’s exemplary career — he has just received the Howard Mayer Brown Award for Lifetime Achievement in the Field of Early Music from Early Music America — may ask themselves why the plum portion of the premier piano treatise from the first half of the 19th century is being published as part of a “Historical Harpsichord Series.” The answer may be as simple as “because the annotator is Mark Kroll.” While Kroll is known to many music lovers for his recordings of harpsichord music from François Couperin to Henri Dutilleux, others may not be aware of his definitive 2007 English-language biography of Johann Nepomuk Hummel. Hence, Kroll — who has also authored or edited two important books on the history of the harpsichord — is single-handedly carrying the Pendragon Series to its next logical milepost. 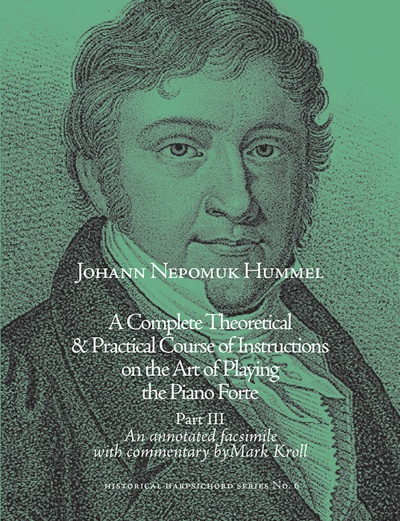 Hummel’s treatise — to which he devoted most of five years (1821-1826) — has always been in the bibliography of serious pianists, though very few non-German readers have ever read it, largely because the simultaneous 1828 English-language translation is to be found in only a few major research libraries. The original German- and French-language publications of all three parts are available in serviceable facsimiles on IMSLP that — language barriers aside — have made them easier to consult. Yet until now, no English-language version of Part III — the portion directly concerned with actual performance — has been readily available, and certainly not one annotated by a world-class performer-scholar.

Kroll’s Introduction distills a balanced account of Hummel’s career arc: born in 1778 in present-day Bratislava and, by 1820, the most sought after (and expensive) piano teacher in Europe, earnestly desired by both the youthful Schumann and Liszt. Yet by 1834, Schumann would surmise that “… perhaps Hummel could not keep up with the fast-moving times.” Little surprise that when he died in 1837 at age 59, he was already seen as out of step with the arch-Romantics. This, Kroll reminds us, does not diminish the influence Hummel wielded between ca. 1810 and 1830, especially among those who were not as enamored of Beethoven and who hardly knew Schubert — himself a great Hummel admirer who wished to dedicate his three late sonatas (D. 958-960) to the king of piano virtuosos.

The downside of the current edition is Pendragon’s choice to reproduce the facsimile pages at exactly 2/3 the original size (based on comparison to my German edition). In certain contexts, the drawbacks to such a reduction might be minimal — say, a violin sonata. However, in a volume that depends heavily on text that is already on the edge of legibility in the original, such a reduction means that even the sharpest pair of eyes will be squinting throughout, often in need of magnification, and in too many places simply unable to decipher. The particular copy used is also yellowed and replete with enough stains and discoloration to further compromise reading. Moreover, nowhere does the edition cite the source of the exemplar being used. That it is a printing from Boston-based publisher David Paine is of considerable interest because of the impressive list of largely New England music dealers and teachers who are initial subscribers.

The saving grace is Kroll’s commentary, which surmounts the physical limitations and airs issues of interest to anyone playing not just Hummel but also the keyboard music of Schubert to the very early Romantics. The two aspects Kroll understandably seizes upon are Hummel’s unequivocal endorsement of commencing all trills on the main note and his equally strong advocacy of equal temperament. Kroll’s endorsements feel as unequivocal as Hummel’s. Yet how definitively should we regard either preference?

The primary issue with Hummel’s instruction, of course, is its range of applicability. Having lived with the Mozarts and known Beethoven for 34 years, as well as admired by Schubert, Schumann, and Liszt, it is hard to imagine a musician better positioned to influence common keyboard practice. Yet Hummel’s style is of a very special nature, one that can best be described as figurative, ornamental, and overtly virtuosic rather than thematic and structural. In this respect he has few contemporaries who invite direct comparison.

Although the influence can be heard most clearly in the early works of Chopin and, to a lesser extent, Mendelssohn, the endorsement of main-note trills has to be understood in the context of a composer whose primary texture is not just theme-and-accompaniment but theme followed by immediate, relentless linear embellishment in which lightning-quick ornamental trills play a large roll. The trills in works, by comparison, of composers such as Mozart, Beethoven, or Liszt, however, encompass contexts both like the ones that Hummel describes — very few of which are cadential — as well as those in which the harmonic or appoggiatura element is equally in play.

Hummel’s preference regarding equal temperament must be viewed in a similar light. One of the most regrettable holes in the history of performance is the all-too-rare mention of how tuning was actually handled in practical terms; we have no real idea how, or how often, J. S. Bach, Mozart, Haydn, Beethoven, or Schubert tuned their keyboard instruments. For this reason, of course, Hummel’s declaration is of unique significance. But just as Kroll is right in pointing out that those who dismissed equal temperament until the 20th century were misguided, it would be an equivalent leap to argue that by the 1820s European music making was one big equal-tempered chorus.

A huge plus for this edition is Traute M. Marshall’s idiomatic and highly readable translation from the German of the section in Chapter VII relating to “free improvisation,” not included in the original English edition. While Hummel toots his own horn freely, his account of the excruciatingly thorough means by which one arrives at mastery of this style will give renewed determination to those still struggling with its demands.

After almost two centuries, Kroll has for English-language readers filled in a gaping evidentiary hole. Combined with Hummel’s own liberally dispensed advice (which, as Kroll points out, is not always as clear as we might wish), this is a volume that should be on the shelf of every serious English-language keyboardist or those who perform with one.

UCLA Distinguished Professor of Music Emeritus Robert Winter has just left full-time teaching to devote himself to his revolutionary interactive platform Music in the Air (MITA).