In 1939, Spanish musicologist Higinio Anglés took a manuscript of Renaissance music found in a castle near Segovia and created with it “a masterpiece of musicological obfuscation,” in the words of Cristina Urchueguía and Wolfgang Furhmann. As it would turn out, some of what has made the so-called “Segovia manuscript” mysterious was Anglés’s unsupported hypotheses about the manuscript’s contents and provenance. Urchueguía tells a gripping tale of the intersection between musical research and political ideology and the confusion it can create in generations of scholars. 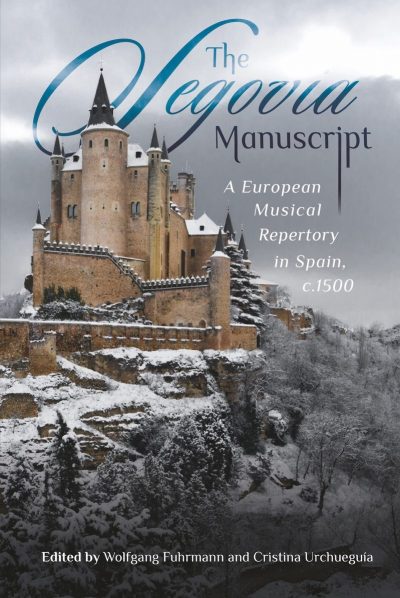 That is one of the many sources of mystery in The Segovia Manuscript: A European Musical Repertory in Spain, c. 1500, one of Boydell Press’s “Studies in Medieval and Renaissance Music.” The volume grew out of a 2007 conference of the International Musicological Society in Zurich devoted to the manuscript. As one reads the volume’s 350 pages, it becomes clear that the manuscript (properly known as Archivo Capitular de la Catedral, MS s.s.) is stubborn and unyielding in disclosing its many secrets. In some respects, its furtiveness even wins out against the intimidating slate of scholars, who nearly all admit with frankness that much about the manuscript remains to be discovered.

The Segovia Manuscript (henceforth called Segovia) has always held a place of prominence in 15th-century music scholarship, since it contains a rare combination in its pages: It is both a “cancionero,” a repository of Spanish secular song, and a major source for Flemish, French, and Italian sacred music. As Kenneth Kreitner puts it in his contribution to the volume, “Of your five favorite pieces from the late fifteenth century, it is likely that at least two will be in this manuscript, and I have no trouble imagining that this would also have been the case for anyone in the 1490s.”

Scholars of Jacob Obrecht, Heinrich Isaac, and Johannes Tinctoris must all be intimately familiar with this distant Spanish source because it contains so many unique works by these composers, works that are oddly absent in other manuscripts much closer to these composers’ activities. Whoever the scribe was, he must have been very familiar with Flemish music: this much Furhmann is able to tell just from the reliability of the attributions in Segovia. And other factors have led some of the contributors, primarily Bonnie J. Blackburn and Rob Wegman, to conclude that the Segovia manuscript was a private collection penned by a Flemish scribe living in Spain. Blackburn looks at the scribe’s transmission of Flemish music, and Wegman looks at the scribe’s fluency with the Flemish language, which well befits an inhabitant of Flanders. Unfortunately, in Leofranc Holford-Strevens’ assessment, the scribe’s Latin is not quite as good; although we might well trust Segovia for its notes and Flemish texts, we might not for its Latin texts.

Although it is intriguing to find Flemish material represented so well in a Spanish manuscript, it’s only the beginning of the international flavor of the collection. Honey Meconi and Fuhrmann suggest, based on the evidence of Segovia’s secular chansons, that the scribe had a close Italian connection, perhaps to Florence. Kreitner suggests that the manuscript was in use around the royal court of Castile toward the end of the 15th century, based on the presence of many compositions of Juan de Anchieta. This is corroborated by another important contribution in the volume, Emilio Ros-Fábregas’s meticulous study of the watermarks in Segovia that points to a “process of compilation that most likely took place in Castile ca. 1498-1500.”

Yet for all that the manuscript has ties to the Castilian court, it is not a presentation manuscript for royalty. Tess Knighton notes that the “casual approach to adding songs” and “relative informality of the script” seem to imply the manuscript wasn’t produced in or by a professional institution. Again, Segovia turns out to be an intensely personal collection, reflecting the tastes of a particular, internationally traveled European at the end of the 15th century. Who exactly he was remains in the realm of speculation.

The Segovia Manuscript is, in a lot of ways, an encouraging book for a young or emerging scholar to read, if my own experience is any indication: The contributors, all seasoned veterans of 15th-century music, really grapple with an immense amount of uncertainty. Their love for the manuscript and its music shows through clearly. The book is also, at times, dense for precisely the same reason. It can leave the reader bleary-eyed, trying to keep track of so many opinions (sometimes contradictory), methodologies, and metrics for analysis. This is often the nature of edited volumes with multiple contributors, but the complexity of the Segovia manuscript exacerbates the clamor of the differing hypotheses.

Any reader of The Segovia Manuscript will inevitably have to agree with Meconi, who concludes: “Let us not be politicians on the campaign trail, proposing simple solutions for complex problems, but let us remain open to a many-textured story behind what, for many of us, is the most fascinating Spanish manuscript of all.”

John Ahern is a Ph.D. student at Princeton University studying historical musicology, particularly the history of Renaissance music. He is writing a dissertation on the music of Firminus Caron.