I’m old enough to remember taking typing class in high school, where in a cacophonous clacking din we would endlessly pound away at the same sample sentences:

Developing good typing technique means keeping your eye on the text, and not looking down at your digits.  Which meant that if your hands didn’t quite fall in the right spot on the keyboard, you’d get results like this:

Gobbledygook, right? Violinist Christina Day Martinson is facing a similar challenge as she tackles the Mystery Sonatas of Heinrich Ignaz Franz von Biber (1644-1704), a collection of 16 pieces that have been called “a triumph of Baroque invention and 17th-century virtuoso style.”

From the pages of the manuscript, Martinson has to play the musical equivalent of “the quick brown fox” (and believe me, a lot of the music is very, very quick!), knowing that the sounds she produces will be closer to “Yjr wiovl ntpem gpc.” In other words, the notes on the page do not correspond to the intended pitches, which invariably adds a layer of mental confusion to the physical and technical demands of this virtuosic music.

Martinson is mastering a method called scordatura, defined as “the technique of altering the normal tuning of a stringed instrument to produce particular effects.” In other words, departing from the usual G-D-A-E violin tuning that’s been standard in the music world since Bach’s time.

But Biber, considered the greatest violinist of the 17th century, wrote these pieces before Bach was born. He pursued these unconventional tunings with the notion of a creating less a pyrotechnical and more a pictorial display of piety. His “Mystery” or “Rosary” sonatas depict in instrumental terms the 15 Rosary prayers standardized a century earlier by Pope Pius VI, and further divided into five groups of “Mysteries,” at turns Joyful, Sorrowful, and Glorious, capped off by a coda-like solo Passacaglia that ranks alongside Bach’s searing Chaconne in its virtuosity and emotional intensity for the unaccompanied violin. 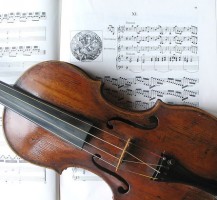 As one critic writes, “Compositionally this allowed Biber to obtain unusual chords, opening up a whole new spectrum of harmonic and textural possibilities. This fundamentally altered what a violin was and could be; its physicality as well as its voice was transformed.” Biber’s strange tunings grow stranger, and more mysterious, as the story itself turns darker and more sorrowful. The most striking example is in the 11th Sonata, “The Resurrection,” in which the composer even calls for two of the strings to cross behind the bridge!

There’s also a great deal of mystery behind these Mystery sonatas. We don’t know exactly when they were written, how they were meant to be performed, or indeed if they were ever played in public in their complete form. Scholars have figured out that Biber wrote the sonatas sometime in the 1670s, but they weren’t heard again — or possibly for the first time — until early in the 20th century. For his part, Boston Baroque music director Martin Pearlman suspects that Biber, like Bach, was an expert recycler, and these ostensibly devotional sonatas also represent a textbook compendium of Biber’s highly individualized style, what’s been described as an “exuberant blend of Italian influences with south German baroque flamboyance.”

Then there’s the simple logistical problem of performing a sequence of sonatas with wildly different tunings in public! The term scordatura actually derives from the Italian discordare, meaning “out of tune,” and it takes a lot of behind-the-scenes work to tinker with the tunings to get them just right. At their performance at the Bechtler Museum of Art In Charlotte this week, Boston Baroque violinist Julia McKenzie didn’t play a note but nonetheless played an invaluable role, busily tuning backstage each of the three violins used by Martinson. After each sonata, she would bring out, Springsteen-concert style, a freshly-tuned instrument for “The Boss” Martinson to put under her chin.

Tonight, as Boston Baroque presents the complete cycle of Biber’s sonatas at Jordan Hall in Boston, McKenzie will be the backstage tuner for no fewer than four fiddles, enabling the group to master the mystery of these remarkable works. In the words of Boston Globe music critic Jeremy Eichler: “Each new configuration is a secret key to an invisible door, unlocking a different set of chordal possibilities on the instrument, opening up alternative worlds of resonance and vibration.”

Benjamin K. Roe is the Executive Director of the the Heifetz International Music Institute. Before joining the Heifetz Institute, Ben was the Managing Producer for Music and Performance at WGBH, Boston. He has also served as the General Manager of WDAV 89.9 FM in Davidson North Carolina and worked for 20 years at NPR, in Washington, DC, where he served in a variety of roles, including Director of Music and Music Initiatives. Ben currently serves as the Artistic Director of the “Music and Museum” series at the Bechtler Museum of Modern Art in Charlotte, NC, and is a frequent guest lecturer, adjudicator, and pre-concert speaker.