Ever think about everything that happens between movements of music? Assuming there are no distractions— we’ve all heard them—what occurs is a meaningful silence. Maybe it’s because I’m a conductor that I’m more conscious of what happens during a pause—all those eyes watching your every move. Performers have to manage the silence as well as the sound because that silence is actually a transition. Shaped by what came before and what’s coming next, it’s musical negative space.

This space usually connects two very different things. After all, composers use contrast to achieve expressivity in their music, within movements as well as between them. Take the Mass in B Minor by Johann Sebastian Bach. Not just an extraordinary work of art, it’s also a compendium of the wide variety of vocal styles used in the Baroque. But Bach did not compose variety for variety’s sake. There is meaning in this diversity, and it’s revealed in the spaces between movements.

In going from one movement to the next, it’s good to ask what has changed. Bach’s Mass opens with the stately choral fugue “Kyrie eleison” (Lord, have mercy), followed by the cheerful soprano duet “Christe eleison” (Christ, have mercy). Indeed, the change of a single word has made all the difference, inspiring a magnificent edifice for the commanding Father and an altogether more intimate setting for the compassionate Son. Bach ensures the two are highly differentiated by varying a number of parameters: genre (fugue vs. duet), mode (minor vs. major), tempo (slower vs. faster), mood (stately vs. cheerful), voicing (chorus vs. solo sopranos), and instrumentation (with winds vs. without). All that change gets smoothed out by the space—the negative space—between the movements. The silence becomes a transition.

If a pause can mitigate contrast, the lack of one can heighten it. Consider how Bach begins the Gloria. He sets “Gloria in excelsis Deo” (Glory to God in the highest) as an exuberant gigue and the following “Et in terra pax” (And on earth peace) as a jovial fugue. Composers typically highlight this shift from the celestial to the terrestrial by employing lower pitches, slower tempos, and reduced scorings. Bach goes further. He allows the heavenly dance to plow right into the earthly fugue without stopping, a sudden impact that makes the opposition even starker.

Could change be managed with sound instead of silence? Bach does just that between the two final choruses of the Credo. “Confiteor unum baptisma” (I confess one baptism) and “Et expecto resurrectionem mortuorum” (I await the resurrection of the dead) could hardly be more different. The first is a stern, old-fashioned motet in somber F-sharp minor with continuo only, the sparest scoring in the entire work. The second is a glorious celebration in brilliant D major with full orchestra, including trumpets. Bridging the two seems impossible, so Bach digs a tunnel—a dark connecting passage of 23 measures striking for its meandering harmonies, pulsing bass line, and dreamlike slowness. If the music to follow is all about the resurrection of the dead, this transition is all about waiting for it. But it’s not just waiting. Bach’s music searches. This is waiting with anticipation, purpose, and meaning.

That passage has been on my mind a lot lately. I’m writing this in the summer of 2021, and musicians everywhere have been waiting patiently for the COVID-19 pandemic to abate. But we’re waiting with a purpose. Searching for new ways to connect with our communities and with each other. Developing our organizations in ways we’ve only dreamed of. Transforming our missions as more and more of society recognizes there is meaning in diversity. Reflecting on everything that’s changed. And anticipating the glorious day we will emerge from this dark tunnel, our silence will be broken, and live music will live again. 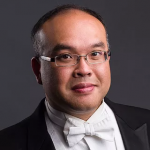 Kevin Leong is a choral conductor and music educator based in Boston. He is Music Director of the Concord Chorus, the Masterworks Chorale, and the Jameson Singers and Research Assistant for Carl Philipp Emanuel Bach: The Complete Works. He holds degrees in music and science from Boston University, Harvard, and Princeton.