My favorite part of any rehearsal process begins when the focus is on recitative. For many singers, especially those who concentrate on Baroque music, recitative is a Holy Grail of interpretation and performance, offering insights into style that can reveal virtually every affective tool of the trade. The genre is no less valuable for those playing continuo instruments of all sorts.

Reaching back to the eve of the 17th century, history has revealed a long continuum of aesthetic and rhetorical values variously applied to recitative performance in its assorted milieus. There are the sought-after conventions of style thought to have been au courant during a given composer’s lifetime, and many have been the shifting fashions of performance applied to the same music over subsequent centuries. Regardless of the period or performance practice in question, though, we’ll always expect an unambiguous focus on words as the generative, driving force, to be delivered with unmistakable clarity and affective persuasion. Rehearsal processes, therefore, aim for a shared understanding of rhetoric and gesture that brings the music, vocalist(s), and instrumentalist(s) into a fully unified utterance.

Of course, such processes can be complicated and require a good deal of experience. Pre-rehearsal preparation is the best start. Unless singers know the instrumental part(s) in addition to the sung material, there’s no guarantee that collaborating instrumentalists will be able to read a vocalist’s musical intentions—even if the diction is crystal clear in its own right and the continuo team has a text underlay readily in view. To learn fully the basso continuo line, figures (explicit or implicit), as well as any additional instrumental writing (e.g., accompagnato), should be the ultimate goal of every singer preparing for a first rehearsal. Without such a grasp, the recitative is only half learned.

On the other side of the coin, continuo parts by themselves tend to supply less notated information than do singers’ scores. Yet what is actually supplied—if only a bass line—is by convention itself rarely performed precisely as rhythmically notated (especially longer values), so that there’s a good deal of license still requiring context even before factoring in extra vocal intentions. Instrumentalists have the further task to develop insights into the vagaries of speech-driven singing. For example, syllabic emphases and variegated consonants/ double-consonants subtly alter note values and inflective rhythmic flow. Any list of these variables is exhaustive, as virtually no note type receives precisely the same treatment at every occurrence. Ultimately, then, we can’t perform recitative convincingly without becoming aware of the rhetorical/ tonal architecture from every contributing musician’s perspective.

But once that task is covered, a singer is afforded an equally valuable skill. Informed by an understanding of the instrumental part(s), one can provide inflective, gestural cues that serve to prefigure changes in flow, pacing, or meter when appropriate (instrumentalists develop the same skill from the opposite perspective). When a singer grasps fully the “signals” that instrumentalists expect, it’s possible to lead an ensemble from the voice.

I had the recent good fortune to work with a veteran singer I’ve admired for many years. This artist’s approach to recitative in a major work by J. S. Bach delivered every affective and rhetorical detail with deeply natural and convincing flair. At the same time, careful shaping provided intentional signals that subtly guided the ensemble through every change in pace to achieve a well-aligned performance. All to say that, beyond the normally taught rhetorical principles of good recitative singing, this is a neglected ensemble skill that should be nurtured as far as possible.

Read other installments of Canto. 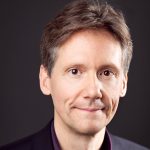 Dana Marsh is Director of the Historical Performance Institute at the Indiana University Jacobs School of Music and Artistic Director of the Washington Bach Consort. In addition to receiving his undergraduate degree from the Eastman School of Music as an organist, he had a career as a countertenor soloist and consort singer for 16 years in the U.S. and the UK. He received his D.Phil. in historical musicology from the University of Oxford.