Countertenor Bejun Mehta describes the music on CANTATA–yet can I hear… as “profound and intimate” as well as a “conversation with the self,” ideas that suffuse even the most cathartic moments of this recital. The cantata is often viewed as miniature opera, yet Mehta and the Akademie für Alte Musik Berlin eschew overt theatrics in favor of sensitive, introverted readings. 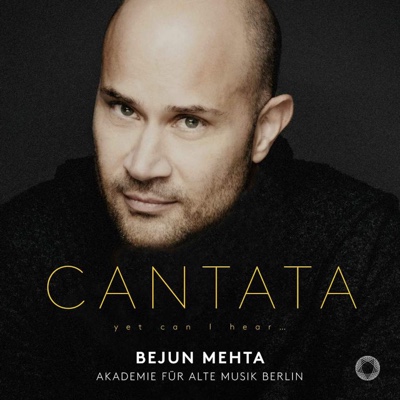 Eight full-length cantatas and excerpts depict pastoral love, deep piety, and bitter jealousy while also demonstrating the flexibility of this popular Baroque form. Bach’s expansive “Ich habe genug” comments on death as a comforting union with God, conveyed in meditative vocal lines, a hypnotic oboe obbligato, and sensual contrapuntal strings. Mehta and the Akademie’s deliberative approach in the titular opening aria recalls the origins of Bach’s music in personal reflection during worship. The comparatively more extrovert “Schlummert ein” becomes an expression of peace at the thought of release from mortal burdens. The aria “Schlage doch, gewünschte Stunde” from Melchior Hoffmann’s Trauermusik is another hopeful embrace of death, this time more lighthearted with dotted rhythms and a chiming bell, yet Mehta finds the gravity of the moment without sounding too solemn (or ironically joyful).

Here and throughout the disc, tempos are maintained at a moderate pace and dynamics kept within an effectively modest range. Mehta’s outstanding technique draws little attention to itself, enhancing the decidedly unshowy atmosphere. His tone is warm and pliant in all registers (including an especially colorful middle range, as well as a full top), his diction precise and melodic, and he articulates even the fastest runs smoothly without rounding phrases off too much. “Ach, daß ich Wassers g’nug hätte,” by Bach’s older cousin Johann Christoph, is a free-flowing lament with sighing, richly scored strings and chromatic lines. Mehta makes it a somber, almost stunned realization of the speaker’s guilt before the Almighty. In Mehta’s hands, Handel’s lighter, more celebratory sacred anthem “I Will Magnify Thee” is more a statement of worldly awe than an outpouring of praise.

Secular works by Handel and Vivaldi feature more purposefully florid writing, for example, right from the start of the album with Handel’s continuo cantata Mi palpita il cor. Yet the absolute evenness of the phrases and sheer naturalism Mehta brings to these displays become the most impressive part; he makes it sound as though people simply speak in melismas. “Ho tanti affani in petto” isn’t the average Baroque self-pity at the burden of love here but a withdrawn, delicate immersion in one’s thoughts. Well-supported, lucid descending lines don’t evoke the end of the world, but they do portray this speaker’s whole being.

Vivaldi’s cantatas were known for being somewhat tamer than his other works, but the comparative restraint of Pianti, sospiri e dimandar mercede suits this recital well. Mehta adds a slight inflection to the opening recitative bawling out the fickleness of one’s beloved, showing he can turn up the humor. “Lusinga é del nocchier” is a typical Vivaldian storm aria, this time over a gently rhythmic bass line that opens into a full-blown tempest for the middle section, where Mehta shows he can also turn up the heat.

Ranging from just continuo to one-per-part to 4-3-2-2-1 strings, the Akademie für Alte Musik Berlin matches Mehta in feeling as well as polish. Several pieces include obbligato flute or oboe that turn the inner monologues into internal dialogues, and Handel’s “Siete rose rugiadose” features vocals entwining with a lush cello bass line. The sound at the Nikodemus Church in Berlin is clear, with just enough space for things to sound organic. Some listeners may prefer more overtly dramatic performances of this repertoire, but the artists more than justify these measured yet nonetheless expressive interpretations.

Andrew J. Sammut has written about early music and hot jazz for All About Jazz, Boston Classical Review, The Boston Musical Intelligencer, Early Music America and the IAJRC Journal as well as his own blog. He lives in Cambridge, MA.