Frédéric Chopin’s piano concertos pose many conundrums for modern soloists, conductors, and orchestras to solve. Pianist David Lively and the Quatuor Cambini-Paris, joined by contrebassist Thomas de Pierrefeu, offer a compelling view of these two works on this recording for Aparté by returning to their roots as salon music for a chamber ensemble. 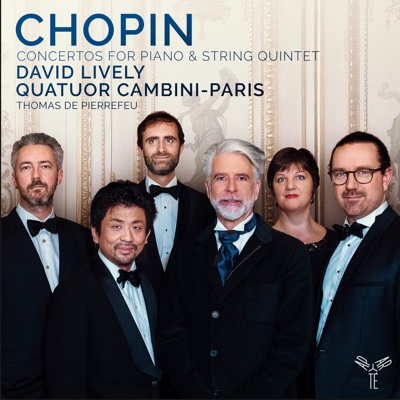 Chopin wrote the concertos in 1829 and 1830 before he left Poland for good, and performed them in private circles with solo strings before scoring them for full orchestra. He offered the chamber version as well as the orchestral elaboration for sale on the cover page of the first editions.

Lively, who traces his musical lineage directly back to Chopin through a kind of apostolic succession of teachers, writes in the album notes that rediscovering the chamber versions of the concertos restores the fine balance between piano and accompaniment that the pieces require and that often goes missing with the orchestral versions.

It also frees up the soloist to indulge in what Lively calls “free continuo playing,” joining the instrumental textures ad libitum and creating on-the-spot dialogues with his colleagues, rather than sitting passively while the strings play introductions and interludes.

And the piano? While Lively acknowledges that he might have chosen a Pleyel instrument for the recording, he settled on an 1836 Erard from the collection of the Belgian piano builder Chris Maene for its lighter touch and rich timbre. The rapid decay of sound in the treble register perfectly suits Chopin’s intricate piano melismas.

Although the CD won’t allow listeners to see the spectacular venue chosen for the recording, the elegant sound suggests something of the opulence of the Galerie dorée of the former Hôtel de la Vrillière in Paris, owned since 1806 by the Banque de France. The gentle, warm halo that surrounds the piano sextet gives the impression of a much larger ensemble, even in an mp3 download format.

Respecting the order in which the two concertos were composed, the recording begins with No. 2, then continues with No. 1, the later and more symphonic piece in E minor, but the first to be transcribed for string quintet by Richard Hoffman, a student of Liszt.

The performances are revelatory. Lively believes that Chopin’s unconventional writing for the piano requires a steadier tactus than modern performances provide. He manages to incorporate the composer’s elaborate filigree into a clear metrical structure while still allowing for expressive elasticity. The pianist’s goal of achieving “a true piano sextet with the greatest variety of colour and balance” is beautifully realized in these readings, which feature niceties of ensemble that any orchestra — modern or period — would be hard-pressed to duplicate.