The pardessus de viole, the highest member of the viola da gamba family, had its heyday in France in the mid-18th century, prompting a flurry of original compositions and adaptations for the instrument. The name indicates its register, as “above the dessus” (the treble viol). For a limited but fruitful time — roughly, the reign of Louis XV —the pardessus extended the popularity of music played on the viola da gamba, shifting the often-dark work of the masters of the bass viol (notably Marin Marais) to a lighter and more violinistic style. Because the pardessus was played vertically, on the lap, the instrument was popular with female players — it was more decorous, more fitting to the costumes of the day — and there were no unsightly violin hickeys. 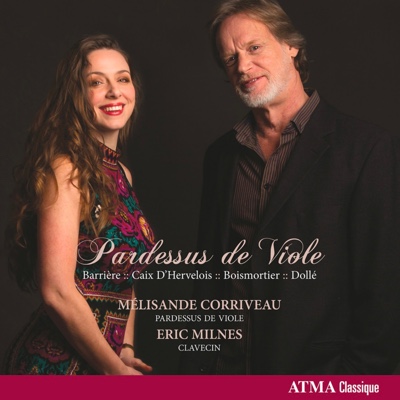 While much of the music for the pardessus remains unrecorded, a 2016 release by Mélisande Corriveau, a Montreal-based gamba player and member of Les Voix Humaines, brings it to life. Corriveau’s album with harpsichordist Eric Milnes opens a window into the fascinating and beautiful world of 18th-century French salon music for the pardessus. (The pair can also be heard on a recent CD with Les Délices, Songs Without Words, which was reviewed by EMA in January 2019. Read it here.) Pardessus de Viole includes sonatas, suites, and a few occasional pieces by Jean Barrière, Louis de Caix d’Hervelois, Jean Bodin de Boismortier, and — my favorite — the performer-composer Charles Dollé, who worked in Paris around the middle of the century.

The music is elegant and charming, but far from simplistic. As Marais does for the bass viol, these composers tax the skill of the pardessus performer. Tuneful and dancelike, the pieces are loaded with virtuosic elements: runs, leaps, and double stops — the latter often combined with arpeggios and suspensions. Complicated enough as written, the music also demands ornamentation, as every contemporary French treatise makes clear. This was no music for a mere dilettante to play.

Corriveau’s performance, on a beautiful 1710 pardessus from the Hart Collection at the University of Toronto, is both elegant and virtuosic. Her tone is rich in the lower registers, transparent and singing on the higher strings. The ornamentation is masterfully free and fluid: trills of all kinds, of course, highly varied; lovely examples of that very French ornament, the tierce coulé; runs as swirling and delicate as Rococo volutes; and, every now and then, a lovely, slow vibrato.

Milnes’s harpsichord accompaniments are as richly ornamented as the pardessus line, full of expressive realizations of the figured bass, continually surprising and delighting — and, best of all, never getting in the way of the treble. (To see Corriveau and Milnes in performance, go to ttps://youtu.be/8BoJbGjIU1I and https://youtu.be/VCVAgjIw9zI)

The CD — which can be heard on Spotify at https://open.spotify.com/album/2zIUNZYP37cvfZI7JJ3kL2?si=EEW6b2_cQxi0-8JShX32Hg — is beautifully recorded, with close miking of the instruments (so much so that one can actually hear Corriveau’s fingers contacting the frets), which gives the music-making a strong quality of presence. The insightful liner notes are in French and English.

Pardessus de Viole is both a welcome contribution to our growing knowledge of the breadth of late Baroque music and a deeply satisfying listening experience.

Nicholas Jones is Professor Emeritus at Oberlin College now living in Berkeley, CA. A poet, translator, and lecturer, he sings and plays recorder, violin, viola, and viola da gamba in a number of ensembles, and is a member of the board of Early Music America.