Musicologists and historians can debate if/when/how contraltos became a rarity in terms of their assuming operatic leads. Suffice it to say they don’t get as much airtime as their higher-voiced colleagues. 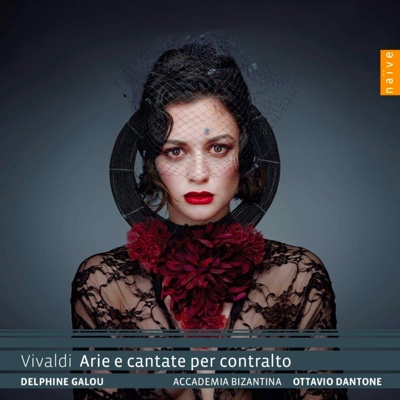 The latest release in Naïve’s Vivaldi Edition — which is recording the entire collection of the composer’s manuscripts at Turin’s Italian National University Library — gives the deepest feminine voice lots of love. This recital of arias and secular cantatas by Vivaldi is a tour of the timbral and expressive opportunities the composer heard in his altos. It’s also another extraordinary collaboration between French contralto Delphine Galou, Italian conductor Ottavio Dantone, and his period-instrument orchestra, Accademia Bizantina.

Listeners are bound to be struck first by the sweetness and control as well as characteristic fulsomeness of Galou’s alto. The sparely scored “No, non vidi” from the canata O mie porpora più belle is as good an opportunity as any to savor the voice’s well-defined contours and how high notes extend naturally out of her rich middle register. She floats lush lines against bright recorders in “Andrò fida e sconsolata” for more sheer aural beauty. Yet the lyrics talk about finding one’s beloved in pain, and Galou’s subtle dynamic inflections catch the tinge of dissonance in Vivaldi’s aria.

Combined with her awareness of Vivaldi’s dramatic and harmonic nuances throughout the album, Galou balances rhythmic flexibility with a compelling sense of restraint. In her introduction to the cantata Cessate, omai cessate, she comes in a hair ahead of the ensemble and then wraps around and under its stabs and sustained notes. The succeeding aria, “Ah ch’infelice sempre,” becomes a brooding reflection as much from Dantone shaping Accademia Bizantina’s tense, dry waves as Galou’s attention to the curves of Vivaldi’s vocal line. She eases back and pushes forward according to the text in the raging final aria; instead of predictable explosiveness, there’s a convincing air of resignation to the speaker’s predicament. The halting melody and pattering outburts of “Si, si bel volto che v’adoro” threaten to pop at any second. Instead, resonant chest voice and pinpoint articulation deliver a smoldering declaration of loyalty.

Galou does let herself go in the aria “Semplice non temer,” in which the speaker feigns comfort to her allies and the contralto snarls and giggles into her exclamations. In the festive cantata Qual in pioggia dorata, she matches obbligato horns in majesty and phrasing as well as trumpeting ornaments.

The ornaments on this disc were composed by Dantone, Galou’s frequent musical partner and husband. They showcase the singer but also explore the text and Vivaldi’s music (without needing to rewrite any of it). “Per dar pace al tuo dolore” is a peaceful confession of love deconstructed into rapid phrases and declaratory statements over a Vivaldian glaze of strings. The da capo in “Care Pupille” soars with the surety of someone in love.

Dantone’s direction is equally sensitive to vocal text and orchestral texture, as well as the soloist. Accademia Bizantina, mostly an active accompanist throughout, responds with warmth and snap. Some writers (including Cesare Fertonani in his liner notes) have suggested that a few of the pieces on this disc show Vivaldi phoning it in. Yet each track demonstrates craftsmanship as well as refinement while spotlighting the singer. If this really is Vivaldi having an off day, we’re still fortunate to have it, especially with these musicians.

Andrew J. Sammut has written about Baroque music and hot jazz for All About Jazz, Boston Classical Review, The Boston Musical Intelligencer, Early Music America’s online and print editions, the IAJRC Journal, and his own blog. He also works as a freelance copy editor and writer while living in Cambridge, Massachusetts with his wife and dog.