Ercole I, Duke of Ferrara, transformed his court into a hub for the arts. During the early 16th century, many of Europe’s finest composers sought posts there. Jacob Obrecht was associated with the court until he was felled by plague in 1505. Antoine Brumel served under Ercole’s successor, Alfonso. Heinrich Isaac also sought a position in Ferrara in 1503 but was passed over in favor of Josquin des Prez, a composer whose legacy is still felt 500 years after his death. 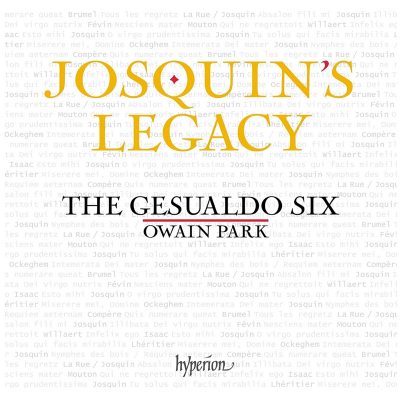 Josquin’s Legacy, the latest recording from The Gesualdo Six, sets the focus upon the famed Franco-Flemish composer and his contemporaries. Plush and radiant, the performances cast a vivid glimpse of a rich and varied era fit for this past anniversary year.

Josquin spent only a year at the court of Ferrara (1503-1504). Some of his works on this disc predate his time there. And those of his fellow composers connect with Josquin in some way, both inside and outside the court. Curiously missing, however, is anything by Obrecht, whose music best reflected the influence of Johannes Ockeghem, the intellectual paragon for Josquin and many of the Ferrara-based composers who followed.

Ockeghem’s “Intemerata Dei mater” takes on warm resonance and urgency in its ode to the virgin Mary. Throughout, the singers draw attention to the music’s intricate layers with a pristine blend anchored by a secure bass. Ockeghem is memorialized in Josquins “Nymphes des bois.” Set to text by Jean Molinet, the music beams in its brightly stacked harmonies and long suspensions, all conveying poignant sorrow for the elder composer’s death.

Other works by Josquin turn towards reverence. “Illibata Dei virgo nutrix” offers chamber-like intimacy as the singers maneuver from duet to a full ensemble. In “O virgo prudentissima”, based on an ode to the virgin by Medici polymath Angelo Poliziano, the lines twist around each other in supple melodic shapes. The singers conclude with a resonant “Alleluia.”

Josquin’s “Tu solus qui facis mirabilia” unfolds slowly, as if the singers were taking time to ponder the awe of text’s description of creation. Here, the composer pays tribute to the past through jarring medieval-style cadences. Sighing phrases and arching lines, hallmarks of Josquin’s mature style, are handled gracefully by the singers to capture a reverence for the Almighty.

“Absalon fili mi” was long thought to have been composed by Josquin, though scholars now believe it to be the work of Pierre de la Rue. The score is a literal depiction of lamentation, with the music cast in low clefs. The Gesualdo Six perform it in its original setting, rendering every phrase with grace and assurance straight down to the low B-flat. Plush vocalism, all the while, conveys the sweet hell of anguish.

Jean Mouton’s “Qui ne regrettoit” is similarly heartfelt. The work laments the death of Antoine de Févin, a composer known in Ferrara during Brumel’s time. The four voices take on the weight and sonority of an ensemble twice its size, relaying the music’s thick textures. Intricacy also marks the singers’ performance of “Nesciens mater”, attributed to Févin. Here, running lines come to rest on ringing harmonies, with the “Virgo hodie” bringing delicate contrast in its invitation to praise. Loyset Compère’s “Quis numerare queat” also unfolds in finely rendered counterpoint, the lines echoing the text’s call for peace and serenity.

The Este court supported the reforms of Girolamo Savonarola, the Ferrara-born radical preacher who controlled political life in Florence before being executed in 1498. Two works on this disc reflect texts Savonarola composed in prison. Heinrich Isaac’s harmonious “Esto mihi” focuses upon the preacher’s anguish, the melodies flowing into a rich tapestry. Adrian Willaert’s “Infelix ego: ponders the loneliness of a sinner, who, finding no solace anywhere in the world, turns to God. The singers draw particular attention to the inner voices, and their urgency captures a prayerful desperation.

Jean Lhéritier’s “Miserere mei, Domine,” based on Psalms 6 and 50 (the latter was a source for Savonarola), also pleads for salvation. Beaming solo voices grow to encompass the full ensemble, where suspended harmonies tip the music towards light. The music of Josquin’s indelible legacy, the performances suggest, look to the hope that shines even in the most perilous times.