American pianist David Hyun-su Kim’s historically informed recording of three familiar Robert Schumann masterworks—Papillons, Carnaval, and Arabeske—is brilliant artistry indeed. And his instrument is of special interest: a copy of an 1830s Graf fortepiano, made in 2013 by Rod Regier of Freeport, Maine, and based on an instrument given by Conrad Graf to Robert and Clara as a wedding present.

The instrument’s basic sound is similar to a modern piano. The biggest difference is that its sound decays more rapidly. This has pluses and minuses, a key plus being exceptional clarity which shows to special advantage in differentiation of textures. A minus is less clarion heft, especially in low basses. The contrast between a quiet moment and sudden loud interjection (for example, in the 10th piece of Papillons) is also less than on a modern instrument. 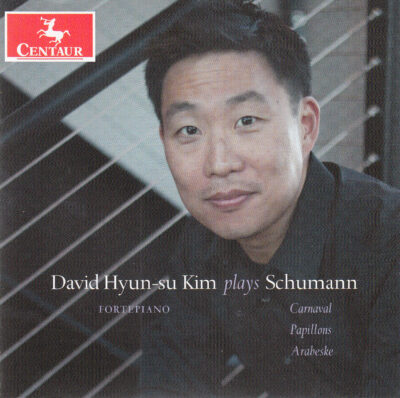 In Kim’s hands, the pluses far outweigh any minuses. He draws lovely, pellucid tone from the instrument. His playing of melody is nuanced and naturally phrased, as in the celebrated “Chopin” movement from Carnaval or in the waltz from the 10th piece of Papillons. The exceptional clarity of textures is due not just to the instrument but to Kim as well, an instance being the duet in the middle of the “Reconnaissance” movement of Carnaval. The soprano and bass voices speak longingly to each other, while the middle register accompaniment is clearly delineated as a third texture. His “Eusebius” (again from Carnaval) spins out a pianissimo melody as intimate as one could desire, over an even softer accompanying line whose separate voices still sing melodically. The polyphonic coda to the Arabeske, where the voice leading sometimes gets lost, here is both clear and poetic.

The instrument’s quicker decay allows for pedal effects which are harder to pull off on a modern instrument (Vladimir Horowitz excepted). In a number of telling instances, Kim uses long pedals over shifting harmonies to create a hazy, diaphanous effect without obscuring melodic lines, notably in the finale of Papillons (where this pedaling is notated), in the transitional episode to the return of theme in the Arabeske (somewhat ambiguous pedal notations), and in the middle of “Eusebius” where the theme is in octaves over shifting harmonies (where multi-measure pedaling is not in the score but works well here). The instrument also has a so-called moderator pedal—a strip of felt between hammers and strings, which creates a muted effect, which helps Kim achieve his hushed, singing opening of “Eusebius.”

Carnaval contains some notoriously treacherous passages, and Kim is up to them. The diabolically difficult “Paganini” intermezzo consists of rapid leaps in each hand in contrary motion, with left and right containing its own cross-rhythm, all played one sixteenth note apart with the left starting first. Kim plays it honestly. He uses minimum pedal and plays staccato (as marked) on every leap, managing to get the section to sound quasi-pizzicato—surely what the composer intended. Notably, he finds poetry in the middle of this virtuosic turbulence.

Kim likewise handles the thumb repeated notes in “Reconnaissance” (also from Carnaval)—which in the wrong hands can sound like a demented woodpecker—with nuance and grace. Yet his Carnaval finale sounds earthbound to me: both a little slow and played three beats to a bar rather than in one (or even better, one to every two bars). Plus, to my mind, he fails to make the best choice as to whether Schumann’s ambiguous tempo indications call for a steady increase in tempo—as Clara Schumann recommended in her edition.

Kim is a noted performer and scholar of historical performance, on the faculty at Whitman College in Walla Walla, Wash. His nod to 19th-century performance practices here has similarities to what one hears from Golden Age piano performances, which can serve as guides to an even earlier aesthetic, such as Rachmaninoff’s performance of Schumann’s Carnaval and Cortot’s of Papillons. As in these early 20th-century recordings, Kim is sensitive to Schumann’s mercurial mood shifts, and often uses time-plus-coloristic-nuance to mark them. He nicely takes time to set off harmonic changes, occasionally plays left hand ahead of right (eschewing, however, the reverse of right ahead of left), adds certain rhetorical pauses, and tastefully rolls selected chords.

Certain of these effects pale from repetition. Delaying the accented second beat of “Arlequin” (Carnaval) is effective a few times but loses its pratfall surprise when each appearance is identical. Pausing each time on the fifth note of the “Promenade” (Carnaval) refrain likewise overdoes an otherwise lovely effect. I also wonder why Kim plays repeats nearly identically when there are opportunities to add variety by highlighting inner voices (a Golden Age specialty) or altering dynamics (ditto; listen to Rachmaninoff’s pppp restatement of the chorale in Carnaval’s “Pierrot” movement).

But a few quibbles aside, these are performances of artistry, integrity, and interest. I enthusiastically recommend Kim’s Schumann to all listeners, not just historical performance aficionados.