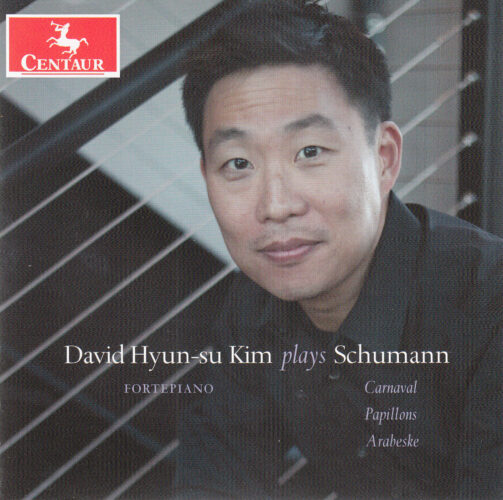 American pianist David Hyun-su Kim’s historically informed recording of three familiar Robert Schumann masterworks—Papillons, Carnaval, and Arabeske—is brilliant artistry indeed. And his instrument is of special interest: a copy of an 1830s Graf fortepiano, made in 2013 by Rod Regier of Freeport, Maine, and based on an instrument given by Conrad Graf to Robert and Clara as a wedding present. Kim is sensitive to Schumann’s mercurial mood shifts, and he uses the fortepiano for sounds and effects that are hard to achieve on a modern instrument.
Pinchon and his superb singers and ensemble offer an immersive, all-encompassing experience. Throughout, they let Bach’s dance rhythms propel music and narrative. The conductor’s attention to relative weights and specific articulations adds a dimension of almost sensual physicality—the emotions expressed here are vividly embodied, not abstract prayers, What makes this interpretation a significant contribution to the vast Matthäus-Passion discography is the admirable balance it finds between dramatic, contemplative, and even architectural approaches, too often taken as polarities.