CD REVIEW — Listening to Bruce Dickey play the cornetto, one could be forgiven for wondering how the instrument ever went out of fashion. His artistry is in full flight on his newest recording, Breathtaking, the culmination of a project to celebrate the affinity of the cornetto with the human voice based on tonal quality and articulation. 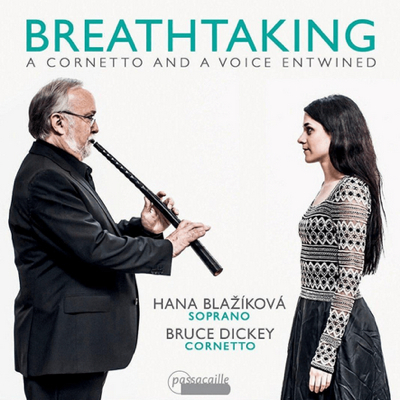 The disc is a collaboration with the admirable Czech soprano Hana Blažíková and an excellent small ensemble performing motets and madrigals, mostly from the early- to mid-17th century, oratorio and opera arias from the end of the century, and an impressive contemporary composition. Purely instrumental numbers add to the contrasts, giving the program the feel of a fine concert.

The new album’s charms are immediately apparent in the opening selection, Maurizio Cazzati’s 1665 setting of the Marian hymn “Regina coeli.” The agility and spirit of Blažíková’s singing are beautifully complemented by Dickey’s cornetto as it responds to her lines, or anticipates them, or simply sings with them. Two love songs by Sigismondo d’India written a half-century earlier — “Dilectus meus” and “Langue al vostro languir” — are highlights due to the composer’s individuality and depth in bringing the words’ emotions to life.

The earliest music is Giovanni Palestrina’s “Dilectus meus mihi,” written in 1584 and performed in Dickey’s instrumental arrangement. The exemplary balance of the recording serves the players’ perfectly attuned ensemble, with the cornetto leading with an irresistible combination of timbral nuance, agile articulation, and flawlessly sustained longer tones.

Dickey prepared a suite from Giovanni Bassani’s oratorio La Morte Delusa as one of two examples of virtuoso cornetto writing toward the end of the 17th century. The oratorio was prompted by the defeat of the Turks in Hungary in 1685. All four excerpts are compelling, but Bassani’s music for “Error senza dolor” (A soul has no error without pain) touches most deeply. His Sonata prima a 3 for two violins, viola da gamba, and basso continuo is also smartly conceived, providing an opportunity to savor the excellence of the string players on their own. 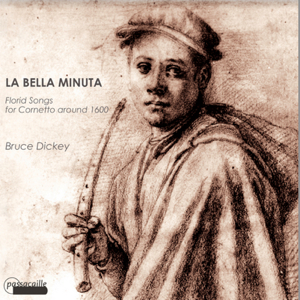 Three fetching excerpts from Alessandro Scarlatti’s romantic opera L’Emireno conclude the album. In the first, the aria “Non pianger solo,” in which Rosinda sings of not weeping alone to a nightingale, Dickey plays a higher-pitched cornetto to emulate the bird.

Breathtaking is the sequel to Dickey’s stunning 2011 album, La Bella Minuta, a collection of florid Italian songs from around 1600 sung on cornetto.

Mark Kanny is classical music critic of the Pittsburgh Tribune-Review. He has written for the Pittsburgh Post-Gazette, The New York Times and other publications.