Fascinating Study Of Vienna’s Musical Past

BOOK REVIEW — Music historians traditionally choose from three methodologies to write their books: biographical, stylistic, and chronological. David Wyn Jones, however, tells us “this history takes a different approach, a slice history focusing on three epochs, 1700, 1800 and 1900, a portrait of each period that allows contrasts to emerge and continuities to be articulated.” He further broadens the scope by covering the years before and after the dates in the title; that is, “from the last siege of Vienna by the Turks in 1683…through to the First World War.” Wyn Jones succeeds admirably. He has written a book that is fascinating, innovative, and rich in historical detail. 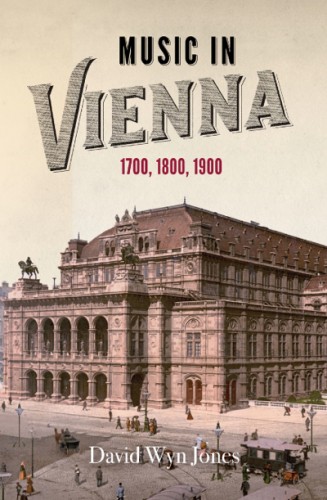 There is plenty of the latter, particularly about the repertoire, performances, and performance practices in each era. For example, we learn that the number of violinists in the Habsburg Hofkapelle increased from ten in 1680 to 20 in 1705 and 26 in 1723. The same is true for the other instrumentalists, such as cellos (zero to three to five), oboes (zero to six to eight), and trumpets (four to nine to 16). The organists increased from three to five to eight, and were “serviced by two organ tuners and repairers who doubled as organ blowers.” The court also employed a person who hired additional players when needed, much like the personnel managers of today’s busy orchestras.

Wyn Jones also underscores the fact that, for the Habsburgs, music “was not just, or even primarily a form of entertainment, it was an assertion of identity.” In fact, many members of the family were trained musicians, most notably Archduke Rudolph (1788-1831), who studied with Beethoven and received the dedication of eight major works by his teacher. Rudolf would ultimately amass a music library of over 6,700 works by 370 composers, featuring not only Viennese favorites like Mozart and Haydn, but also J. S. Bach, Lully, Rameau, D. Scarlatti, and Palestrina.

Wyn Jones, the loyal English musicologist, does seem to devote a bit more attention to Handel than one might expect in a book about Vienna, but, nevertheless, his observations reveal much about Handel reception and performance in the Austrian capital. Baron van Swieten, for example, had inserted a note in the program for performances of Messiah on March 23 and 24, 1799, asking audiences to refrain from any applause between numbers or expect encores, “otherwise the true connection between single parts, from the uninterrupted succession of which should rise the effect of the whole, would be necessarily disturbed.” We also learn that a Viennese performance of Handel’s Alexander’s Feast in November 1812 was performed by a chorus of 280 and an orchestra of 300, and attended by 5,000 people.

The founding of the Gesellschaft der Musikfreunden on June 30, 1814, by some of the most illustrious citizens of Vienna, such as Joseph Sonnleithner, Count Lobkowitz, Baron Nikolaus Zmeskall, and Ignaz von Mosel, receives appropriate attention. Visitors to the offices of the Gesellschaft der Musikfreunde today can see the painted portraits of many of these founders on the walls.

There are excellent descriptions of many other movers and shakers in Viennese society, including musicians, writers, businessmen — or a Habsburg emperor. My favorite is the Ottoman ambassador’s vivid first impression after meeting Leopold I (1640-1705): “His lips are swollen like those of a camel, and an entire loaf of bread could be fitted into his mouth…when he speaks, spit always foams and trickles from his mouth and camel lips, as if he was vomiting, wiped away by the strikingly beautiful pageboys who stand on either side with giant red napkins.” A picture of Leopold provided in the book confirms every detail. Portraits of other Habsburgs through the ages reveal this same genetic anomaly (thankfully, most keep their mouths shut), once more proving the curse of royal inbreeding.

I do have one caveat, however. This Hummel biographer was surprised that Wyn Jones, in his several discussions about the court of Prince Nicolas Esterházy during the period 1804-1811, cites only Johann Fuchs as Haydn’s successor. The succession was actually divided into three positions in 1804: Hummel as Concertmeister, Fuchs as Vice Kapellmeister, and the violinist Luigi Tomasini as a second concertmaster

The final paragraph serves as an eloquent summary of all that we have read in this excellent book. Writing about “the first of many charity concerts by the Vienna Philharmonic Orchestra” on October 3, 1914, “to raise money for the soldiers in the field and the widows and orphans of the many who had already fallen,” Wyn Jones observes that the program, which included the “Eroica” Symphony, might have reminded the audience “of similar concerts in Napoleonic Vienna. This time the empire was not to survive, but music in Vienna, including Richard Strauss, did. Unlike the empire, music proved indispensable.”

Mark Kroll, professor emeritus at Boston University, is a harpsichordist, fortepianist, scholar, and educator. His publications include editions of the music of Hummel, Geminiani, Avison, and Francesco Scarlatti, and books about the harpsichord, the Beethoven violin sonatas, and Ignaz Moscheles.