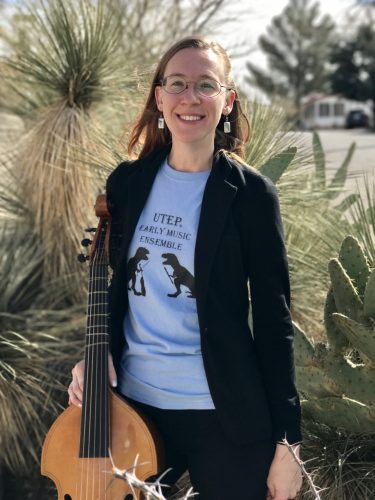 Dr. Lindsey Macchiarella is a Visiting Assistant Professor of Music at the University of Texas at El Paso.  While her musicological research focuses on 20th-century music, she is an avid performer and teacher of early music on the recorder and viola da gamba.  She is the founder and director of the UTEP Early Music Ensemble.

Because I went to a Waldorf school when I was young, the recorder was actually my first main instrument.  I played quite a bit of early music very young.  I took up the flute in High School and for my undergraduate degree, but when I went to Florida State University for musicology, I quickly discovered the Collegium Musicum and went back to the recorder.  Pretty soon, I was the TA for that group and I started organizing concerts on my own so I could pick my own rep!  Somehow, I was pressured into filling a gap in the school viola da gamba quartet, and I’ve been obsessed with that instrument ever since.

What is your most memorable early music experience from the past year?

So, I’ve started putting on early music concerts . . . in bars.  The idea is to create a relaxed concert atmosphere and also to reach people who don’t know much about this kind of music.  During the UTEP Early Music concert last spring, one such accidental concert-goer sat practically at my feet when I played a Fux viola da gamba trio sonata with my students.  Afterwards, he shook my hand vigorously, kissed it (which was a little weird, but he was very excited and meant well), then gave me a play-by-play of his favorite parts of the sonata.  He said it was his first time at a classical concert.

What is an important piece of advice you give to students just beginning with early music and/or performance practice?

You’ve just got to have some people to play with!  I always try to convince students to form quartets with others who play at their same level and to make a schedule of weekly meetings.  What I enjoy most about early music is the social aspect, and I think you can’t really get seriously started without a sight-reading group of your own.

Unexpectedly, you have two hours of free time later today . . . what will you do?

Last night, I went to guitar center and bought an acoustic pickup and a looper pedal.  I have been counting down the hours until I have a free moment to use it to play Gottfried Finger divisions and Michael East viol duets with myself!  It’s going to be so cool.