Need to Arrange and Edit Early Music? Now There’s a How To Guide

Who among us early musicians, whether professional or serious amateur, has not had to edit music for our own use? Alon Schab, a performer, Purcell scholar and lecturer at the University of Haifa, addresses this issue in a well-informed, abundantly illustrated, and well-documented way. He offers many sensible suggestions for the early-music performer, but he also occasionally waxes philosophical, as when he suggests that the serious early-music performer should also be, at some level, a musicologist as well. 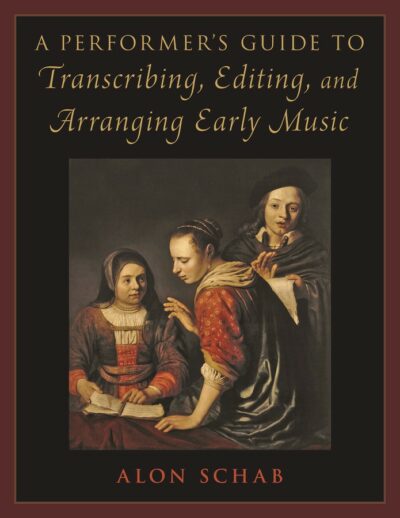 As Schab points out in Chapter 1 (“Historical Sources on the Concert Stage”), performing directly from facsimiles of historical sources gets you closer to the composer’s original intention, but an early printer’s typesetting practices—no beams for groups of eighth or sixteenth notes, for example—may be frustrating for musicians accustomed to today’s notational procedures. The author states, “Ironically, the more one studies the sources, and the more aware one becomes of the challenges that make the editorial process more interesting (multiple sources, variant readings, and blunt errors), the less one is inclined to take those sources, in form of facsimile editions, on stage.” On the other hand, he says, performing from modern critical editions has its own problems, since the editor’s decisions are usually buried in the critical notes. But this, of course, is where our “inner musicologist” comes to the fore.

Chapter 2 (“The Musical Text as a Point of Departure”) delves into a performer’s use of music treatises, focusing on Diego Ortiz’s Trattado de glosas (1553). Though written for the viola da gamba, this book has extensive information on ornamentation that can be used by players of just about any instrument. But how should a performer use this treatise? Should you memorize at least some of Ortiz’s hundreds of ornamental patterns for specific intervals and cadential patterns? Should you use Ortiz’s recercadas as models from which you might improvise your own recercadas?

Regarding this type of improvisation, Schab says that “An intuitive way for many conservatory graduates nowadays is to try to compose a first-species counterpoint to the plainsong.” Later, on the same page, he adds, “The near impossibility of improvising species counterpoint in any other but the first species is evident if we try to estimate how fast one must think when improvising.” Here Schab appears to equate improvisation with spontaneity, but they are not synonymous.

Performers of the late 15th century, at least some of whom likely were musically illiterate, could improvise two parts against a monophonic basse danse tune. The trick was to know the original tune by heart, and which added notes are consonant with a particular note of the cantus firmus, and also be familiar with the other improvising musician well enough to predict what they would be likely to play against the same note. A couple of generations later, in 1553, Vicente Lusitano wrote about improvising against a cantus firmus in as many as four parts, and still later, in 1614, Adriano Banchieri wrote about improvised counterpoint (contrapunto alla mente), saying that even if there are errors, it “makes a very delightful sound.”

Chapter 3 (“Different Works, Different Versions, Neither of Both?”) raises a philosophical question: At what point does an alternate version of a work become a separate work in its own right? Schab’s case study compares J.S. Bach’s Brandenburg Concerto No. 4 (BWV 1049), for violin, two recorders, and orchestra, with its variant version, for harpsichord, two recorders, and orchestra (BWV 1057). Both survive in autograph copies. Schab asks, “[A]re the two … readings interchangeable? And if one wants to see them as interchangeable, can this be done with two works that are different in chronology, key, orchestration, and catalogue number?” Rather than answer the question directly, Schab wisely notes that “A survey of the recordings of BWV 1057 shows that, as far as performers today are concerned, the two readings are interchangeable indeed.”

Chapter 4 (“The Ear Must be Chief Umpire”) raises questions about modern editorial practices for early music. Schab illustrates some notational conundrums with musical examples, largely concerning cross-relations and enharmonic accidentals, from four pieces by one of his favorite composers, Henry Purcell. Schab cautions performers (and editors) about modernizing accidentals, particularly in music of the 17th century, when composers were becoming fascinated “with the freedom offered by chromaticism.”

At 90 pages, Chapter 5, “Historically Informed Arrangement,” is the longest chapter in the book. It includes several case studies by way of demonstrating possibilities for arrangement, including “From Organ to Recorder Consort” and “From Lute to Recorder Consort.” As a recorder player himself, Schab certainly understands how to write for four recorders. His suggestions are generally quite sensible, but sometimes prolix. Sweelinck’s Echo Fantasia (nearly 10 pages of score in Schab’s arrangement) and J. S. Bach’s Prelude and Fugue, BWV 543 (10 full pages), are both wonderful pieces, but I question how appropriate they are for recorder consort.

Some readers will find Chapter 6 (“Writing for Early Instruments Today”) useful, though many performers of early music (myself included) have little or no interest in composition. Moreover, most of us are probably not inclined to program Anton Webern’s Three Little Pieces (Op. 11) or Frank Bridge’s Three Miniature Pastorals on early instruments, as described (and copiously illustrated) in a sub-section of this chapter entitled “Arranging New Music for Old Instruments.” Yet this chapter, like others, fortuitously includes several engaging insights into the history and current state of the early-music “movement.” Schab’s discussion of Paul Hindemith’s interest in early music and early instruments, as revealed in his Kleine Sonata (Op. 25, no. 2) for viola d’amore and piano, is a case in point.

Schab’s biases are clear: he favors Baroque music over earlier and later repertoires, and he is quite partial to the recorder. Nevertheless, I heartily recommend this book to any serious performer of early music. It is really the only book of its kind.

Stewart Carter is Past-President of both the Society for Seventeenth-Century Music and the American Musical Instrument Society. He holds an endowed professorship at Wake Forest University, where he teaches music history and directs the Collegium Musicum.