‘Lillian is in constant dialogue and partnership with her instrument. The results are challenging, occasionally unsettling, and always beautiful.’

In recent years, Lillian Gordis has made a substantial mark as a harpsichordist, not least with two solo recordings. Her latest, Bach, was awarded a Diapason d’Or from the prominent French music magazine, which heralds the album as “masterful, fulfilling, very personal, confirming the promises of a harpsichordist whose discretion is matched only by her temperament.” A Berkeley native, born in 1992, she began her harpsichord studies at age nine. 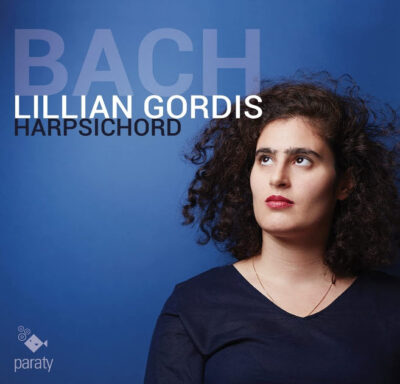 Gilbert Martinez first encountered Lillian in about 2005 when she was 13 and he had become director of Berkeley’s MusicSources, known for its large collection of keyboard instruments and for programming historically informed concerts. “Lillian lived in the neighborhood,” he recalls. “We’d leave a key in the flower pot for her to come and practice on our harpsichords and virginals.”

Harpsichordist John Walthausen, a longtime friend and colleague, notes “her total commitment to shaping sound. While this might sound like a normal thing, in the case of Lillian, this commitment brings her to the limits of what a harpsichord can do. Rather than imposing musical ideas of interpretation, Lillian is in constant dialogue and partnership with her instrument. The results are challenging, occasionally unsettling, and always beautiful.”

Recently, Lillian spoke with me via Zoom from her apartment in the Marais district of Paris. In a broad conversation about her idiosyncratic musical path, we talked about lessons with Pierre Hantaï, the rarity of solo women harpsichordists, bicycle racing, entrenched traditions within historically informed performance (HIP), and plans for a spring 2023 US tour with her long-time collaborator, viola da gambist Jérôme Hantaï. (Jérôme and Pierre are brothers in a very musical family). We started with what’s on her music stand: Bach’s Sixth Partita.

Lillian: One of the things I like to do with my concert programs is to always keep something old and include new things. The Sixth Partita is something I played a really disgusting amount on the harpsichord as a teenager. At the time, it was objectively too hard for me. Everybody told me not to play it. But I’m actually grateful that I head-banged with it because it’s really satisfying now.

Parker: What led you to stick with the harpsichord over the piano?

Lillian: I had a hard time playing Bach on an instrument where everyone was always telling me to play one voice louder than the other. [Laughs] There was also just a physicality aspect. I like the contact and grip that you get from indirectly plucking the string on a harpsichord, and I remember really enjoying that feeling, in a very unintellectual and purely sensory way.

Parker: Your parents didn’t bat an eye at you fixating on this at such a young age?

Lillian: I was homeschooled, so my parents didn’t bat an eye at most things. My siblings and I had a variety of, um, peculiar interests all of which were encouraged. Everything from Shakespeare and Homer read-alouds in the park to racing road bikes. As long as we were asking ‘why’ about everything, they were ready to support us.

Parker: When it came time to fly the coop, how did you go about it?

Lillian: When I was about 12 or 13, I started discovering recordings of harpsichordists in Europe who, weirdly, I wasn’t aware of. I went to look for a recording of the Well-Tempered Clavier for myself when my parents gifted me the scores for my 13th birthday. I happened upon Pierre Hantaï’s and snapped it up, kind of instinctively. That was a real game changer.

I wanted to work with Pierre, so when he was planning to perform in Berkeley on tour with Jordi Savall, I jumped at the opportunity. It was improbable: I mailed him a handwritten letter from JFK, before my flight back home, after a block of lessons with Arthur Haas—Pierre didn’t have email at that point. He eventually gave me a lesson at our house in Berkeley, and was really, really encouraging. And he told me, ‘if you want to do this, you should probably come to Europe.’

So I made an exploratory trip to Paris later that year [in 2007, age 15]. When I came back, I thought, ‘Ok, if I wanna do this with my life, I’ve got to get over there sooner rather than later.’ In July 2009, I landed with two suitcases, some phone numbers, and places to crash until I found an apartment. I guess you could say I flew the coop somewhat recklessly.

Parker: What was your path on arrival?

Lillian: Pierre ended up giving me lessons for a number of years on an informal basis. I also had lessons with another of Pierre’s students, Bertrand Cuiller, a wonderful harpsichordist and a great mentor and guide at that point.

Working with Pierre was unique and formative. His approach was really hands-off, oriented towards the philosophical challenge of establishing your own limits or lack thereof. Sometimes I would have lessons and play, but other times he would play whole programs for me and I would listen. There was not a huge didactic focus to it and there were almost no parameters apart from conviction—‘being convinced and convincing.’ What that process afforded me is the awareness that I need to continue to question myself constantly. That I just don’t know. 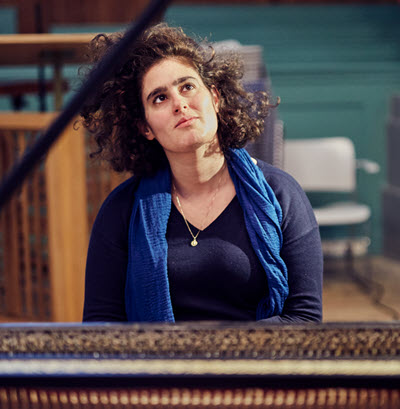 Parker: Your approach to education has been fairly independent. As you’ve matured, what do you notice about how most harpsichordists are educated?

Lillian: There’s an idea that the harpsichord has limitations or is a fundamentally limited instrument. It supposedly doesn’t have dynamics, it’s black and white, it lacks nuance. Most often I would come across rules set down about articulation, fingerings, ornamentation, and length of phrases. You’ll still often be told that you have to articulate on every bar line, or that you’ll need to systematize every form of phrasing, every iteration of a fugue subject. Another example is the insistence on using paired fingering. I did learn how to play as fast as humanly possible with paired fingerings in virginalist music, because I felt like I should know how. But when you stop and think about it…why do we focus more on reductive examples like anonymous fingerings in early 17th-century manuscripts, rather than discussing Tomkins’s complex fingerings of John Bull’s In nomines?

It is very implausible that keyboardists actually didn’t play with their thumbs. The repertoire itself would indicate otherwise. You can’t play a tenor cantus firmus with diminutions in the superius and bassus without your thumbs. It is one thing to say to a young musician, ‘you should learn how to include paired fingerings in your scales, they existed all the way up to Bach.’ Probably because they can work well on the harpsichord because they can promote natural inégalité. But should it become an impediment?

When the explanation itself is reduced to ‘people didn’t use their thumbs, look at this engraving someone chose for the cover of the Fitzwilliam Virginal Book,’ which I definitely heard more than once, I feel like we are overly engaged with ‘performative HIP’ and not critical enough about the sources we are looking at and how to apply them.

Parker: Is this entrenched?

Lillian: For me, it’s really entrenched, even problematically entrenched. And I say problematically because now we’re several generations into this movement, and so what might’ve been an exploratory approach for the performers of the Leonhardt-Brüggen and then Kuijken generations is now set in stone. Maybe one of these guys said something one time, maybe it was 10 times, maybe they didn’t use the right word or maybe something got lost in translation, but now you have people from generation two, three, even four where it’s just become a new oral tradition. And if you ask people, ‘why?’ their first reflex is not to point to historical sources or even to their own empirical performance experiences, but instead they’ll say something like ‘Leonhardt said that.’ 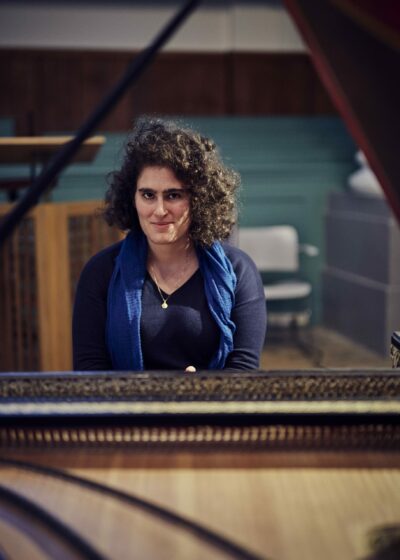 Parker: Does resistance to this received wisdom set you outside today’s version of HIP?

Lillian: Well, I don’t know where I view myself because I play a historical instrument, and I have gone through the whole process of HIP, right? But I have a hard time viewing myself as a part of a world that seems to be very entrenched with a lot of limitations, which bother me. At this point, I am focused on removing limits and barriers, both with the instrument itself and its dynamic capacities for projection, and with how people view it.

Parker: What other barriers exist for the harpsichord? Does gender come into play?

Lillian: I wasn’t aware of this for a long time, it didn’t cross my mind. I did receive a fair number of misogynist comments, but I think I downplayed them to myself because I didn’t know how to respond, as a very young woman. When I started putting out recordings, people started to say to me things like ‘no woman has recorded solo Scarlatti in France since, like, 1970-whatever, and it was Blandine Verlet.’ I thought, ‘there’s no way that’s possible.’ Then I looked into it, and it turned out to be true. I realized that it was the same with the Bach recording. I don’t know any women harpsichordists my age who are putting out Bach discs like that—or any other major repertoire. Young women who want to play solo concerts aren’t getting the opportunity to focus on just being a soloist and certainly aren’t viewed as such, like some of their male counterparts. And I find this discrepancy really disturbing.

Parker: How else does gender come up?

Lillian: I feel like it’s a bit of a struggle to be taken seriously. Sometimes there’s an allergy to the idea that a woman is going to play major canonic repertoire at the harpsichord. I once had an exchange with a concert organizer who had a festival where the theme was female musicians. I wrote to him—my first disc was about to come out—and suggested that I play the Scarlatti program from the album. He wrote back to me, ‘Well, we’re only interested in dead women’…but he was planning to hire a woman to play Jacquet de la Guerre! That’s an extreme example. I have a problem with the idea that we ask anyone to perform ‘their’ music, and the same goes for minorities of any kind. That seems to me to be a historically informed continuation of exactly the same forms of oppression these groups have faced for centuries which, in 2022, is concerning.

Parker: You’re returning to the United States to perform in 2023?

Lillian: I will be back in the spring with Jérôme Hantaï for our second US tour. On the East Coast, we’ll play a program we’ve played a lot elsewhere: a Marais suite, the Couperin First Suite in E minor, and the Bach G Minor obbligato sonata. On the West Coast we are putting together a new program with Forqueray and other surprises. [The tour starts in New York in April and ends in Berkeley in May.]

I always play something solo during these duo programs, and I am thinking of continuing with my rediscovery of Bach Partita Six. But I always leave room for flexibility about that. It is really important when you perform to listen to your instinct and perform what feels right and most relevant at that moment. I always give an outline of a program, but sometimes I will change up at the last minute because I will have gotten very involved with something in the intervening months or years. Sharing that with listeners is very important.

Parker Ramsay’s latest recording is The Street, a concert-length solo for harp and narration by Nico Muhly and Alice Goodman. His season includes a residency at IRCAM in Paris. While serving as organ scholar at King’s College, Cambridge, he earned his undergraduate degree in history, and later pursued graduate studies in historical performance at Oberlin and modern harp at Juilliard.