CD REVIEW — The worlds of the English monarchs Elizabeth I and Charles I could scarcely have been more different. The Elizabethan Settlement at the end of the 1560s created a temporary ceasefire between warring religious factions and ushered in the great flowering of art and secular music of the Elizabethan Age with its images of nymphs, shepherds, and fa-la-la madrigals. Not quite a hundred years later, the English Civil War broke out, pitting Charles and his supporters against the Puritan-controlled Parliament, and the solemn singing of metrical psalms became more symbolic of the national mood. 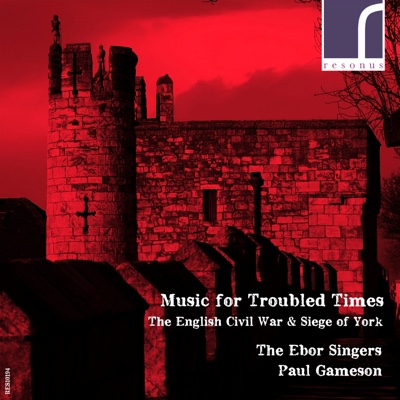 The northern city of York, a Royalist stronghold, came under siege from April to July 1644, when the combined armies of Scotland and Parliament camped outside its walls. The Ebor Singers’ new CD, Music for Troubled Times, seeks to capture the essence of those difficult 12 weeks in vocal music by William Lawes, John Hutchinson, Thomas Tomkins, William Child, John Wilson, George Jeffreys, and Matthew Locke, including psalms that might well have been sung by the besieged townspeople as they gathered for services in York Minster.

The Ebor Singers — after Eboracum, the 7th century Roman name for York — set the tone for this interesting album with William Byrd’s motet O Lord, make thy servant Charles, our King to rejoice in thy strength (a motet originally written for Elizabeth) and end with Matthew Locke’s affecting How doth the city sit solitary, a setting of words from the Lamentations of Jeremiah that invokes the desolation of York after it fell to the enemy.

Although neither were contiguous with Charles’ reign, both Byrd and Locke were in the employ of the Crown. George Jeffreys, John Wilson, and Henry Lawes were Royalist musicians attached to Charles’ court at Oxford. Jeffreys’ How wretched is the state, Wilson’s My God, my King, incline thine ear, and Henry Lawes’ A funeral Anthem all help to invoke the dark temper of the period.

William Lawes (Henry’s brother) possibly joined Charles’ court in York in 1642, the same year he joined the Royalist army, perishing at the Siege of Chester in 1645. Four of his twelve psalm settings — some of them interesting hybrids that combine cathedral verse anthem style with the metrical psalm tunes beloved by Puritans — make up the bulk of this recording. At 15 minutes, the woeful Psalm 22 is the longest track.

Interspersed between the psalms are York Minster organist John Hutchinson’s brief Behold, how good and joyful a thing it is, Chapel Royal composer Thomas Tomkins’ O God, the proud are risen against me, and St. George’s Chapel, Windsor Castle organist William Child’s motet for two trebles, O Lord God, the heathen are come into thine inheritance — the last two especially appropriate for a city under siege.

The 23-member mixed choir, which presents a concert series in York Minster, sings with warmth and transparency. Its seven soloists aren’t shy about using vibrato, and intonation occasionally wanders off-center. Organist David Pipe contributes Thomas Tomkins’ Sad Pavan: for these distracted times, played modestly on an 8-foot chamber organ flute stop. And the prevailingly somber mood is relieved by William Lawes’ taunting catch (with drumbeats) about the taking of Cawood Castle by the Roundheads in 1642:

See how Cawood’s dragon looks,
which fights from far the Parliament rooks.
Which like to fattened ravens cry Pork
to prey upon our lords of York.
But we have guns against their plots
and those that cry Cawood fear thee not.