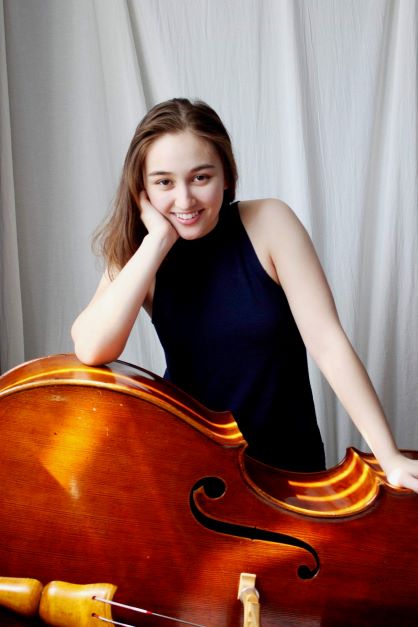 Double Bassist Nina Bernat has won the Grand Prize of the fourth annual Lillian and Maurice Barbash J.S. Bach Competition for strings.  Ms. Bernat was one of three finalists who performed at the Staller Center Recital Hall, at Stony Brook University, New York on Thursday December 1, 2022. Her stunning performance of Bach’s Suite No. 2 in D minor, BWV 1008 earned her an award of $5,000 and performances at the Island Symphony Bach Festival on January 29, 2022, 2:00pm at St. Peter’s By-the-Sea Episcopal Church in Bay Shore, NY, and with New York City based ensemble, Amor Artis, on a date to be announced.

Ms. Bernat also won first prize winner at the 2019 International Society of Bassists Solo Competition and first and the 2022 Minnesota Orchestra Young Artist Competition. At the age of 19, she performed as guest principal of the Israel Philharmonic under András Schiff and Osmo Vänskä. Additionally, Bernat performed Mozart’s Per questa bella mano with the Juilliard Chamber Orchestra in Alice Tully Hall as winner of the Juilliard Double Bass Competition. Bernat began studying with her father, former member of the Israel Philharmonic, Mark Bernat. She has continued her studies with Tim Cobb and cellist Astrid Schween at the Juilliard School as a proud recipient of the Kovner Fellowship. The summer of 2022 included a residency at the Marlboro Music Festival.

Second prize ($1,000) was awarded to violinist, Yuki Serino, who performed Bach’s Partita No. 2 in D minor, BWV  1004. Born in Rome in 2006 to a family of musicians, Ms. Serino began studying violin with her parents at age three. She currently attends the Pre-College of the Mozarteum University in Salzburg, studying with violinist Pierre Amoyal. She has played chamber music with principal musicians from Teatro alla Scala, the Academia Nazionale di Santa Cecelia, Maggio Musicale Fiorentino, Orchestra Mozart, the Lucerne Festival Orchestra Camerata Salzburg, and the Mahler Chamber Orchestra, and has a great interest in early music.

The Lillian and Maurice Barbash J.S. Bach Competition was established by siblings Cathy, Susan, and Shepard Barbash to honor their parents for their lifelong support of the arts.  The annual competition is for string players ages 16-30 who are required to perform any piece composed by J. S. Bach for unaccompanied string instrument.