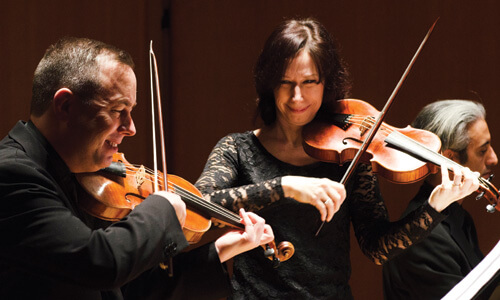 ABOUT THE PROGRAM:
“Revered like rock stars within the early music scene” (The New York Times), Quicksilver brings together today’s top North American historically informed performers to explore the rich chamber music repertoire from the early modern period to the high Baroque. For this virtual performance, directors Robert Mealy and Julie Andrijeski lead a dazzling musical tour from Venice to Vienna and beyond. The itinerary includes sublime and dramatic works spanning the 17th century—from the beginnings of the virtuoso violin in northern Italy through its rich development in the courts of Germany—featuring extraordinary sonatas by Castello, Rosenmüller, Legrenzi, and Fontana.

“Our concert is a journey through the rich and strange world of the seventeenth century sonata, from its birth in Venice around 1620 to its elaboration in the hands of German composers in the 1690s,” explains Quicksilver violinist and co-director Robert Mealy. “It is also a celebration of the aesthetic delights of this early modern period, when the quirky, the unexpected, the sumptuous were all things to be savored: in the spirit of the time, this program is a “cabinet of curiosities,” full of wonders and astonishments.”

This program is presented in partnership with the Morgan Library & Museum, New York, and RK Cultural Productions, Miami.

ABOUT THE ARTISTS
Described as “drop dead gorgeous with a wonderful interplay of timbres,” (Early Music America) and praised as “irresistible” (Fanfare Magazine), Quicksilver brings together today’s top North American historically informed performers to explore the rich chamber music repertoire from the early modern period to the High Baroque. The ensemble has been featured at numerous music series and prestigious festivals, receiving critical acclaim, standing ovations and repeat invitations at venues across the country, ranging from Carnegie Hall to Early Music Hawaii. Quicksilver’s debut recording, Stile Moderno was described as “Breakthrough of the Year…breathtaking” (HuffPost), and their latest release, Fantasticus, was named one of The New Yorker’s Ten Notable Recordings of 2014. The ensemble’s upcoming recording, The (very) First Viennese School, will be released later this season.

One of America’s most prominent historical string players, Robert Mealy (co-director, violin) has been praised for his “imagination, taste, subtlety, and daring” (The Boston Globe). A frequent soloist and orchestral leader, Mr. Mealy is principal concertmaster at Trinity Wall Street and the Orchestra Director of the Boston Early Music Festival Orchestra; he recently received a Grammy for his work with BEMF. He has also led the Mark Morris Dance Group Music Ensemble in performances here and in Moscow, accompanied Renée Fleming on the David Letterman Show, and recorded and toured a wide variety of repertoire with many distinguished ensembles both here and in Europe. He currently directs Juilliard’s distinguished Historical Performance Program, and taught previously at Yale and Harvard. In 2004, he received EMA’s Binkley Award for outstanding teaching and scholarship. He has recorded over 80 CDs on most major labels.

Lauded for her “invigorating verve and imagination” (The Washington Post), Julie Andrijeski (co-director, violin) is among the leading baroque violinists and early music pedagogues in the U.S. In addition to co-directing Quicksilver, she maintains an active performance schedule, playing with many diverse early music groups across the nation including the Atlanta Baroque Orchestra (Artistic Director), New York State Baroque (Concertmaster), Apollo’s Fire (Principal Player), and Les Délices. A full-time Senior Instructor at Case Western Reserve University and Teacher of Baroque Violin at the Cleveland Institute of Music, her combined skills in music and dance often culminate in workshops and special teaching engagements at schools such as Oberlin Conservatory, Indiana University, Juilliard, the University of Colorado – Boulder, and at several summer workshops as well. Her recordings can be found on Acis Productions, Dorian Recordings, Centaur, Koch, CPO, Avie, and Musica Omnia.

The Boston Early Music Festival is supported by the Massachusetts Cultural Council, National Endowment for the Arts, Constellation Charitable Foundation, and WCRB Classical Radio Boston, as well as a number of generous foundations and individuals from around the world.