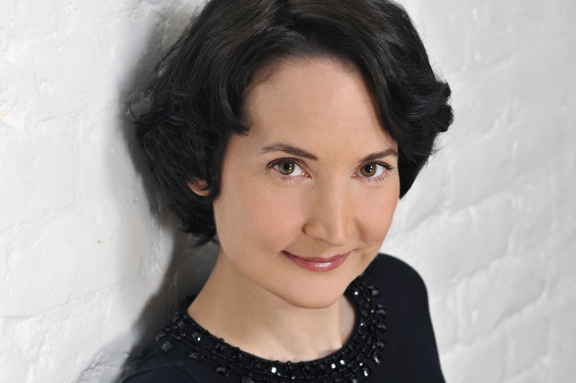 Soprano Amy Bartram has sung a wide range of repertoire from Bouzignac to Barber to Gace Brulé. Known for her radiant, clear, and agile singing, she has been a professional singer in NYC for twenty years and is a voice teacher and educator experienced in historical performance practice.

A frequent soloist in oratorios, Amy has also sung lead roles in operas by Copland, Kioulaphides, Leardini, and Purcell. She has been a guest artist with Kleine Musik and the NY Consort of Viols. Other ensemble credits include Clarion Choir, Musica Sacra, Pomerium, and Vox in venues such as Carnegie Hall, the Guggenheim, and Lincoln Center. She was a lute-playing satrap in the acclaimed GEMS NY production of the Play of Daniel.

Amy collaborates with fortepianist Dongsok Shin in recitals of German lieder. She has given concerts of medieval song, self-accompanied on medieval lute, and explored lute songs in four languages with lutenist Ekko Jennings in more than sixteen unique programs offered on series in NYC and NJ.

Her CD with guitarist Jocelyn Nelson, Ma Guiterre je te chante: 16th century guitar solos and chansons, received glowing reviews from the journals of the UK and French lute societies and from Soundboard Scholar. Amy’s other solo recordings include John Stone’s Daybreak in Alabama: A Langston Hughes Song Cycle and The Persistence of Song: Songs of Jonathan David. With Trinity Choir (Wall St.) and REBEL, she recorded for NAXOS.

A teaching artist, Amy has brought programs of early song to classrooms and libraries. One of the many programs she created as artistic director for Machicoti, a Medieval Ensemble, was “Singing from Manuscript Sources,” which introduced enthusiastic audiences at the NY Public Library to medieval notation. Amy holds an MA in vocal pedagogy from Westminster Choir College, and a BA in music from Vassar College.