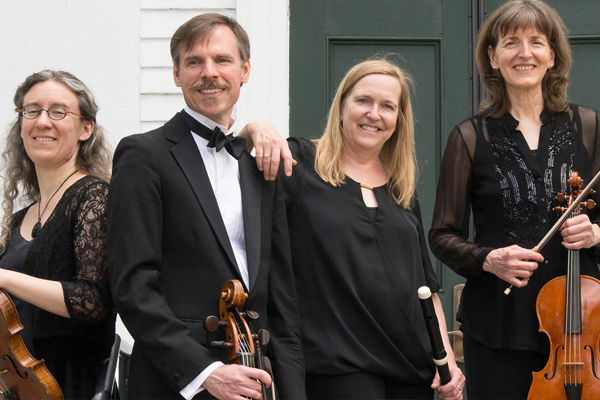 “If you see a great master, you will always find that he used what was good in his predecessors, and that it was this which made him great.” Goethe.

Goethe’s words couldn’t be more true of the great master G.F. Handel. Handel’s musical borrowing is on full display in Taking Inspiration, the season finale of Musicians of the Old Post Road’s 2021-22 subscription series, “Reimagining, Rediscovering!” Join the ensemble on Saturday, April 30 at 7:30 pm EDT at Harvard-Epworth Church in Cambridge, MA, and Online via Livestream to celebrate the creative spirit!

Whether subliminal or intentional, this program will explore the inventive ways in which Handel reimagined and transformed pre-existing music by Corelli, Rameau, Keiser, Scarlatti, and Telemann. The ensemble will pair each work by Handel with the chamber work that served as its muse.

Audiences will discover the origins of some of their favorite pieces, including the famous “Hallelujah Chorus” from Handel’s Messiah, which was inspired by an earlier instrumental fugue by Corelli. Also featured is a Telemann concerto for three violins that sparked Handel’s lovely and lively Adagio and Allegro for flute and strings, HWV 338; and one of Rameau’s Pièces de Clavecin en Concerts for harpsichord, flute, and violin, which Handel reimagines in his overture to Joseph and his Brethren.

The concert is dedicated to the memory of Harriet S. Carey through a gift by John A. Carey to Musicians of the Old Post Road’s Fund for the Future. The concert is funded, in part, by Avidia Bank and the Massachusetts Cultural Council, a state agency.

ABOUT MUSICIANS OF THE OLD POST ROAD
Musicians of the Old Post Road takes its name from its acclaimed concert series that brings period instrument performances of music of the 17th, 18th, and 19th centuries to beautiful historic buildings along New England’s fabled Old Post Road, the first thoroughfare to connect Boston and New York City in the late 17th century.

Winner of the 1998 Noah Greenberg Award from the American Musicological Society, Musicians of the Old Post Road has also received programming awards from Chamber Music America and the US-Mexico Fund for Culture. The ensemble has toured in Germany, Austria, and Mexico, and has appeared at festivals and on concert series in the US, including the Indianapolis Early Music Festival, the Boston Early Music Festival Concert Series, the Castle Hill Festival, the Artists Series at Mercer University in Macon, Georgia, and the Connecticut Early Music Festival. The ensemble has held a residency at Dartmouth College and was featured on WCVB television’s “Chronicle” program and 99.5 All Classical radio’s “Live from Fraser” program.

The ensemble’s discography includes seven recordings that have each been praised in the US and abroad. They include: The Virtuoso Double Bass (Titanic, 1994), Trios and Scottish Song Settings of J. N. Hummel (Meridian, 1999), Galant with an Attitude: Music of Juan and José Pla (Meridian, 2000), Quartets of Telemann and Bodinus (Meridian, 2004), Feliz Navidad: Christmas from Spain and New Spain (Meridian, 2008), and Roman Handel (Centaur, 2013).  The ensemble’s 7th CD, Earthly Baroque, was released by Centaur in 2017.