Via Monteverdi by Joan Catoni Conlon

Last spring, KIConcerts (Colorado Springs, Colo.) asked me to lead a choir tour to Italy that would focus on the cities where Claudio Monteverdi (1567-1643) wrote: Cremona, Mantua, and Venice. Because Monteverdi’s music is so endlessly fascinating, the prospect seemed too exciting to pass up.

This tour, called Via Monteverdi, will become a reality in May 2015, expanded by two additional performances in Rome, including a service at St. Peter’s Basilica. The choir of over 40 includes the singers of Canzonetta, a small Seattle ensemble directed by Roger Nelson, that will perform a few pieces on its own in each concert. 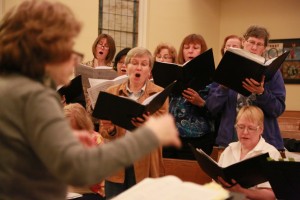 KIConcerts advertised the tour nationally, resulting in a choir that will include singers from Seattle, New York, Washington, D.C., Florida and Tennessee. Beautiful editions of the music were prepared and circulated to each singer by the editor (who also sings in the ensemble), Patrick Rice, founder of PDR Editions, Seattle.

Monteverdi’s music long has interested me. In preparing my book, Performing Monteverdi: A Conductor’s Guide, I realized how audacious and daring were the madrigals of Monteverdi’s fourth book (1603), written while he was in the employ of the Gonzaga. During the eleven years before their publication, Monteverdi was busy writing and circulating works in his new style, which he called seconda prattica. Reactions from traditionalists were predictably harsh: the conservative canon Giovanni Maria Artusi in Bologna thought they were ugly. Monteverdi had had the temerity to employ unprepared dissonance, and to believe that conveying the text was more important than contrapuntal rectitude. Fortunately, Monteverdi prevailed and published his fourth book. We will sing three madrigals from the fourth book: “Sfogava con le stelle,” “Si, ch’io vorrei morire,” and “Ohime, se tanto amate.” Since these texts could not be performed in a church, we will sing them in an 18th-century Mantuan theater.For our sacred concert venues, we will perform movements from Monteverdi’s Mass In illo tempore, which accompanied his Vespers of 1610 in publication.

In this “audition” work for the position of Maestro di Cappella at San Marco in Venice, Monteverdi showcased his knowledge of traditional contrapuntal technique, proving to the church authorities that, in addition to his daring new style, he was fully capable of writing counterpoint replete with imitation, augmentation, diminution, inversion, and other contrapuntal devices. 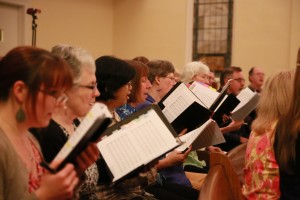 We will sing Monteverdi’s “Stabat Virgo Maria,” a sacred contrafactum by Aquilino Coppini of Monteverdi’s madrigal “Era l’anima mea” (fifth book). Also, since at the base of the dome at St. Peter’s Basilica are written the words “Tu es Petrus, et super hanc petram edificabo ecclesiam meam” (Thou art Peter, and upon this rock I shall build my church), we will sing Palestrina’s remarkably beautiful motet setting of that very text at the Vatican.

Joan Catoni Conlon is Professor and Director of Graduate Choral Research, Emerita, at the College of Music, University of Colorado, and taught previously for many years at the University of Washington. She lives with her husband Frank in Seattle.